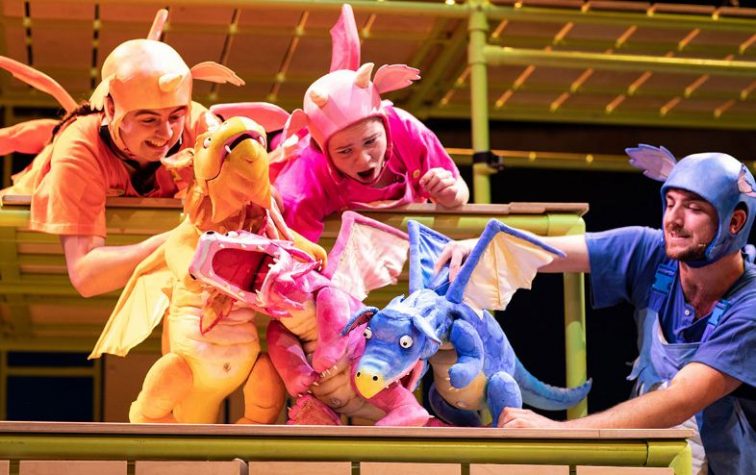 Zog, the biggest dragon at school, tries his hardest every day to win a golden star – whether it’s learning to fly, roar or breathe fire.

But everything he tries to do, he seems to struggle with.

It’s only when Madam Dragon is teaching the class to capture princesses that Zog surprises himself and others by rising to the challenge – and carving out a worthy future for himself.

Having worked their magic on Tabby McTat, Tiddler and others, Freckle Productions now turn their attention to another children’s favourite from Julia Donaldson and Axel Scheffler.

Bringing a story about dragons to the stage is no mean feat so the idea of interspersing actors in costume with puppets, at different points of the show, is as effective as it is inspired.

The costumes are colourful and fun, the staging is physical and imaginative, the performances are energetic and – as was the case in Tiddler among others, the puppet-work is exemplary.

The songs are bright, bubbly and uplifting – particularly one about practicing and another introducing the brave knight, Sir Gadabout the Great. But most of the songs are not as memorable as some of the others that have been penned – in recent years – to pad Donaldson’s books out to an hour, or so, on stage.

It’s that padding that can often be the problem; part of the beauty of Julia Donaldson’s books is the pace of the language as the narrative zips along, bouncing from rhyme to rhyme – but when proceedings are broken up by songs, there is a real risk that the words on which the whole production is built get lost. And sadly, that happens here, more often than in some of the stronger adaptations.

With Zog being one of the more memorable books – full of rhyming phrases that have worked their way into the vernacular of many a child – “now that you’ve been shown, you can practice on your own” and “what a good idea, said Zog” are used on an almost daily basis in my own family – it seems that the more memorable the book, the less memorable the musical production.

Freckle’s Tabby McTat bucked that trend, with one of Donaldson’s better books shining even more on stage, and with Tiddler, the same company did a tremendous job in remaining faithful to the source material by squeezing four books into one show – thereby removing the need for padding.

But this show loses a little of that magic. It opens with a five minute puppet show, with squirrels and rabbits jumping and climbing around the stage and the auditorium but it had little to do with the rest of the show and the audience just wanted to see a dragon. Too many of the songs seemed to be inserted in the middle of Donaldson’s verse, losing the flow of the language. The audience participation was less creative than in many of such shows. Madam Dragon’s thick Scottish accent was sometimes hard to understand and much of the dialogue seemed to get lost in the sound mix, making it hard to follow both the original manuscript and the additional text.

Children will certainly find it fun but for adults, it’s less satisfying than many of the other Donaldson adaptations and won’t stick with you as long.

For most in the audience, the show will drive them straight home to pick up the book to remind themselves just why they went to the theatre in the first place.