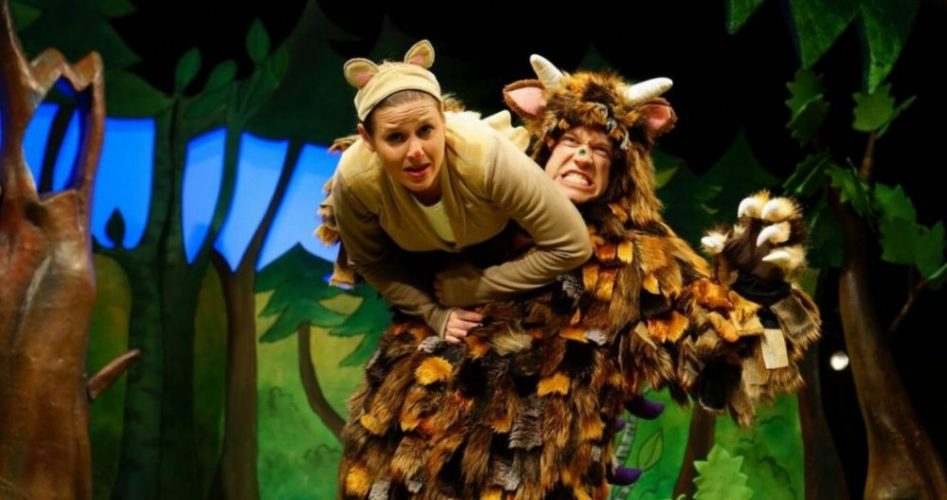 For anyone unfamiliar with Julia Donaldson’s modern classic children’s story, a mouse (Lauren Scott-Berry) took a stroll in the deep dark wood, and a fox (Alastair Chisholm) saw the mouse and the mouse looked good…

But with a little ingenuity – imagination – and luck – the little brown mouse manages to outwit everyone else in the wood – including a rather fearsome beast with terrible teeth in his terrible jaws, turned out toes and a poisonous wart on the end of his nose, whose tongue is black and has purple prickles all over his back.

Julia Donaldson’s much-loved books have been re-imagined in many ways – from Oscar winning short films to musical theatre adaptations.

The books take about five minutes to read, the films were about half an hour long and the musical stretch to about an hour.

Each adaptation, then, requires a certain amount of padding – achieved largely through songs, audience participation and a little extra story here and there.

One of the big difficulties is to do all of this without losing the rhythm and power of Donaldson’s delightful source material.

But while the same formula has been followed successfully for many of her books, somehow with this, her most famous one, the songs are less tuneful, the lyrics less faithful, the audience participation less engaging and the additional plot points less imaginative.

Perhaps the expectations are just higher when it comes to bringing the definitive Julia Donaldson book to the stage.

While it has its weaknesses, the way the fox, owl and snake are realised is entertaining and the colourfully embellished Gruffalo suit is worth the wait.

Adults might find this adaptation less satisfying than some of the others, any such criticism is unlikely to trouble the target audience, who will enjoy enthusiastically shouting lines from the book at the stage and dancing to the otherwise unmemorable songs.