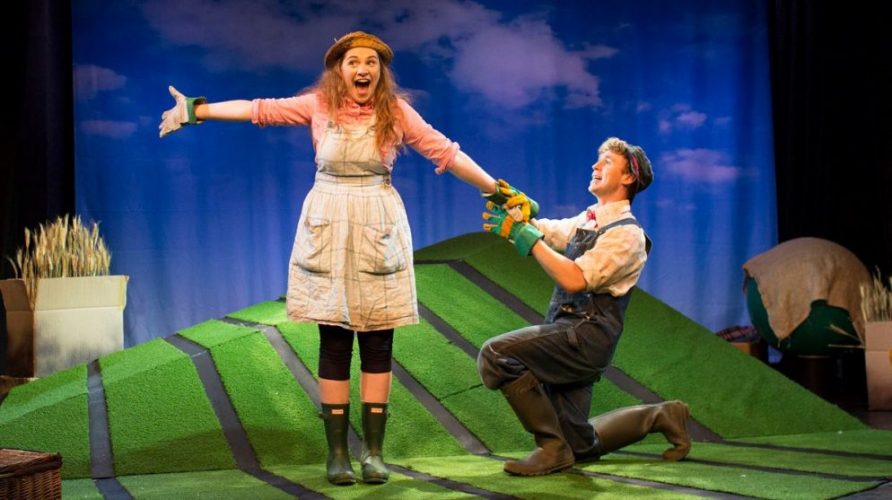 Betty O’Barley and Harry O’Hay were scarecrows. (They scared lots of crows every day). As anyone with young children will probably already know.

They decided to marry and they wanted their wedding to be the best ever – the best wedding yet.

So Betty and Harry set off on an adventure around the farm to find all the things they needed to make it a wedding that no-one would ever forget.

Having previously made a success of turning Julia Donaldson’s children’s favourite Stick Man to the stage, Scamp Theatre have now turned their attention to her book about two scarecrows, on the hunt for everything they need to make a perfect wedding, from feathers to make a dress to jewellery and flowers.

When I warned my five year old to go to the toilet before the show started, because it would last about an hour, he was shocked. “The book doesn’t take an hour,” he laughed. And he’s right. The trick with these adaptations is to pad the source material out with songs, dance routines, audience participation and some additional plot, while remaining faithful to Donaldson’s vision and without drowning out her words.

As with many of her books, the story is simple – as she did with The Gruffalo, Stick Man and The Smartest Giant In Town – among others – she sends her central characters on a walk – through the woods, trying to get home or just around the farm. On the page, the mellifluous rhymes are complimented by the colourful characters they meet on the way – as illustrated by Axel Scheffler. On stage, the supporting actors take on the additional roles by pulling funny faces, adopting funny voices or wearing funny costumes.

Anyone who knows this book will be taken in by this production, which faithfully follows the story, sprinkling catchy songs throughout – and where any might feel a a little superfluous, they’re so well presented that they’re enjoyable in their own right anyway.

There’s less audience participation than in some of the other Donaldson adaptations, but there’s plenty to engage kids and their parents alike – from the bright performances, colourful costumes, imaginative set-design and most importantly, the songs and Donaldson’s words.