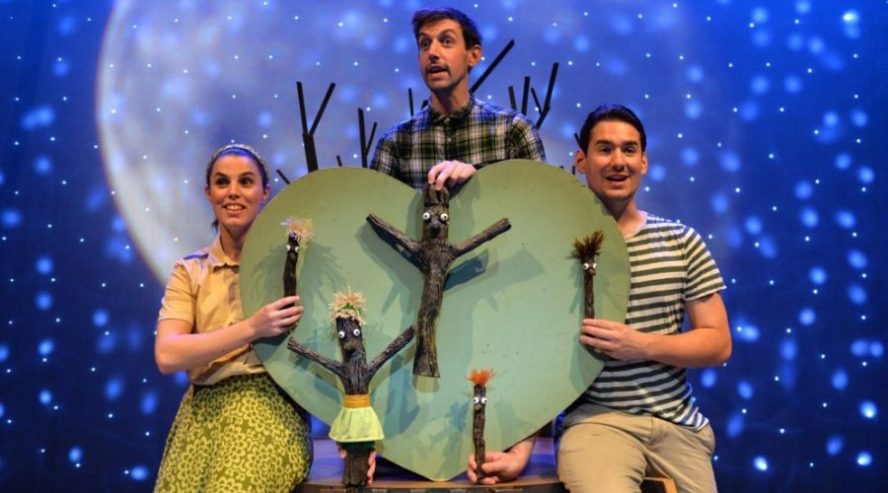 Stick Man lives in the family tree, with his stick lady Love and their stick children three.

One day he wakes up early and goes for a jog – and then his wife and kids don’t see him for months.

Through a series of encounters and misadventures, each one more frustrating and unfortunate than the last, he ends up further and further away from the family tree.

Can he find his way home for Christmas?

As has been done with some of Donaldson’s other books, director Sally Cookson has doubled the length again to deliver a live event to add to the Stick Man experience.

This production, from Scamp Theatre, works better than some previous ones, where Donaldson’s words have almost got lost in a melee of songs and additional plot. Here, with the help of a couple of authentic additions to the original text – despite an inexplicable, but not disastrous omission – you feel like you’re still watching something conceived in the mind of Julia Donaldson.

The music isn’t as overbearing as in some other adaptations, with only a couple of songs added to the proceedings. And the songs – as well as a little repetition here and there – add to the experience rather than hold it up.

With the characters we meet ranging from a dog and a swan to Santa Claus and – of course – the eponymous Stick Man – Cookson and her current team (not pictured above) employ some effective and interesting ways of getting the cast of three to bring them all to life. You can’t have people dressed as sticks or CGI animations running around the stage, so David Shute runs around carrying the Stick Man prop, uttering his lines and responding to bites, pecks and shakes that befall the title character as if they were happening to him.

Jennifer Greenwood bounds around the stage with the energy – and the voice – of Black Adder’s Miranda Richardson, while Robert Jackson spends most of his time accompanying the action with live music and special effects.

But one of the most effective elements of the show is the audience participation – whether the cast are running through the stalls, batting balls to the children, or inviting kids to shout, pantomime style, at the characters, the audience will feel both involved and engaged as well as entertained.