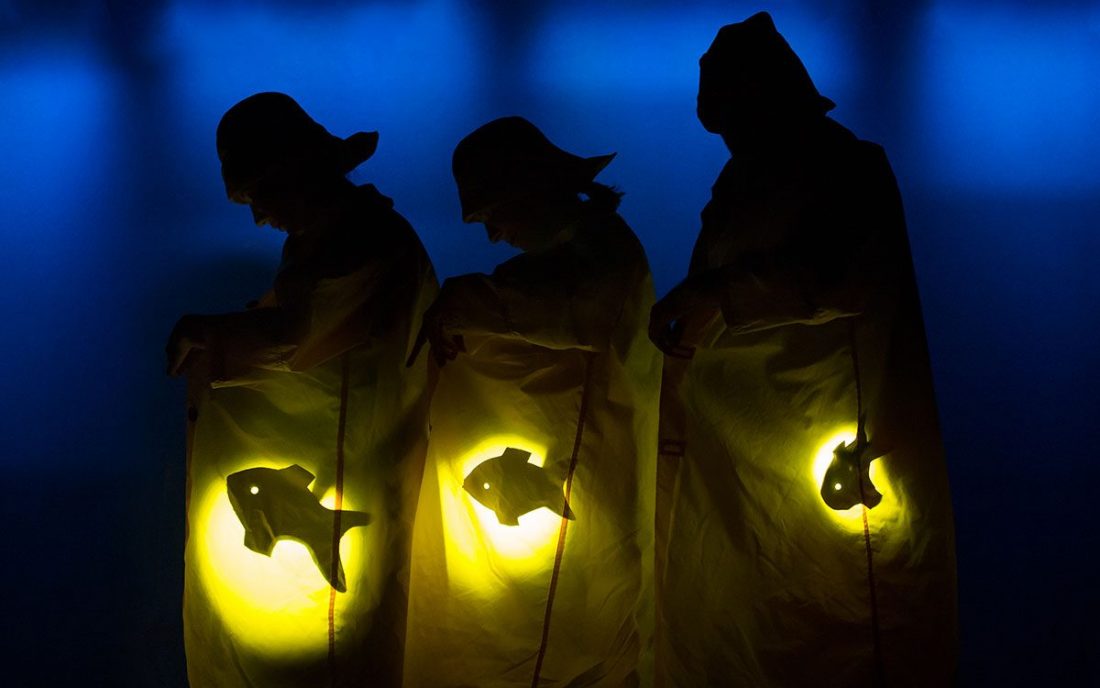 For fans of the books of Julia Donaldson and Axel Scheffler, this production brings together four of them into a single show.

In the Tiddler of the title, a little fish comes up with increasingly tall tales to explain why he keeps arriving late for school – but perhaps he’s actually telling the truth?

A Squash and a Squeeze is the story of how a wise old man persuades a little old lady that her tiny farmhouse isn’t too small for her after all.

After a visit to a new clothes shop, George becomes The Smartest Giant in Town, but he ends up giving his clothes to animals he meets on his way home, because they need them more than he does.

And broken up and interspersed with the other stories, Monkey Puzzle follows a young monkey who can’t find his mum, as a butterfly takes him around the jungle, to help him look for her.

Many of Julia Donaldson and Axel Scheffler’s books have already been put on stage, padding – usually effectively – books that take about ten minutes to read to last a full hour.

Squashing and squeezing four of the books into one hour leaves no room for padding – in fact, some of the segments of the well-known stories have been left out, which might throw those in the audience who know the books as well as those who adapted them for the stage.

But this ensures that the production briskly jumps from one story to the next, at a pace that will keep your toes tapping, almost like a metronome – with some set to music and others punctuated with musical interludes. Many of the books include text that’s crying out to be set to music anyway, so most of the songs fit right in.

Beginning with a song-and-dance routine that introduces our three narrators and teases ahead to some of the fun to come, the show opens in earnest with the start of Monkey Puzzle, before an unexpected segue into a barn-dance version of A Squash and a Squeeze.

As each segment draws to a close, children and adults who know the books – and in truth, few people will be going to this show if they don’t – will have fun, trying to work out which story will be next.

With less padding than some of its single-book-show predecessors, some of the stage tricks have to be kept a little more simple, but the result is also that a somewhat spartan stage design allows the actors alone to switch from one set to the next in moments, just by moving a box here and shifting a plank there.

The production design is necessarily simple but tremendously imaginative and the good-natured stories are as fun to watch and listen to as they are to read to your children.

Some of the stories are more faithful to the books than others – some work better than others – and naming the show after Tiddler does a disservice to George the giant, the little old lady and the lost monkey.

Splitting Monkey Puzzle and sprinkling it throughout the show breaks the flow of one of Donaldson’s most mellifluous works and skipping much-loved passages of some of the books altogether can feel a little frustrating, if leaving it in would add only another minute or two here and there to the running time.

But a show that never lags and keeps you wanting more certainly makes you wish that some of the other books in the collection were similarly presented as a medley, rather than stretched out so far that some of the magic of Donaldson’s words can disappear or get diluted.