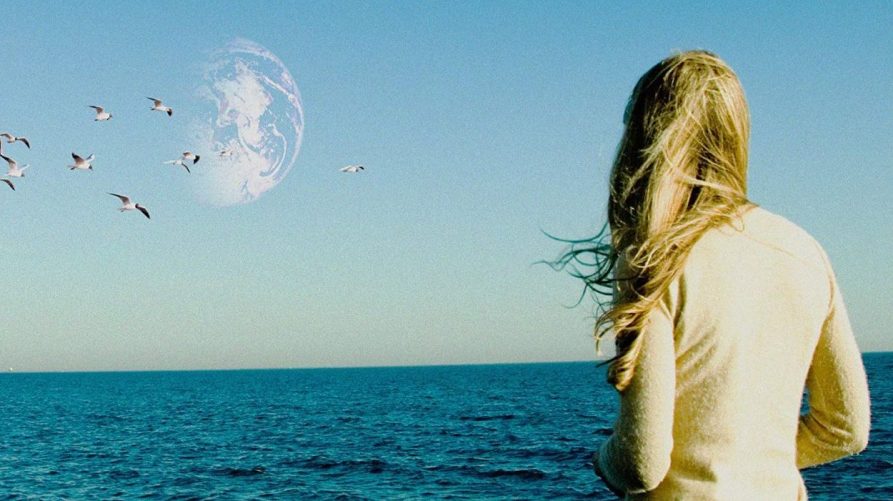 Rhoda (Brit Marling) is an incredibly bright and ambitious high school student. The recent discovery of a new planet, very much like our own, has only increased her enthusiasm for becoming an astronaut – an ambition very much within her capability.

On the way back from celebrating her latest educational success, a little the worse for wear, she crashes into a car that’s stopped at traffic lights, killing a woman and child.

After serving four years in prison, Rhoda emerges into a world where she no longer seems to fit. All her ambition and drive have gone and she takes a job as a cleaner.

Unable to come to terms with what she has done, wracked with guilt, she manages to trace the man who lost his family in the accident; a formerly successful composer, John Burroughs (William Mapother), who’s become a recluse since the tragedy.

She turns up at his home, with the intention of apologising, but loses her courage, and saying the first thing that comes to her mind, she ends up becoming his cleaner.

Through her regular visits, she’s at least able to restore some order to his life and over the weeks, they become friends.

Slowly, they help each other emerge from their shells, which helps him return to his music, while she starts to contemplate science again – more specifically, that other earth – Earth 2 as it’s become known. She decides to enter a competition to try to win a seat on the first flight to the planet’s closest cosmic neighbour.

The closer they grow, the harder it is for her to open up to him and address the elephant in the room. Having fought to find herself again and kick-start her life, can she bring herself to risk it all again by coming clean?

In fact, although it’s called Another Earth and it’s about a budding young scientist who’s desperate to fly to another planet, it’s actually a film about a woman trying to get over her guilt for the one foolish action of her young life – with the science storyline serving as little more than narrative wallpaper; the planet is rarely featured as anything more than an image in the cloudless sky.

Having the space race going on in the background, oddly, detracts somewhat from the dramatic tension of the guilt-ridden accidental killer and the bond she’s formed with the unknowing person who has suffered as a result of her action. And the story of a science student who doubts her vocation when the chance to achieve her dreams is offered to her feels like it could have been an effective episode of the Twilight Zone – for those who remember what that was.

William (Tom Cruise’s cousin) Mapother and Brit Marling deliver suitably understated performances, which seem to weigh the film down with gravity; there’s very little levity – that said, while the story doesn’t require much, if 50/50 can squeeze an entire comedy out of cancer, some small element of light relief might have been welcome.

While this does seem to be another example of the increasingly common practice of trying to squeeze two very distinct films into one feature length package (last week’s Hugo is the most recent to come to mind), the first-time director Mike Cahill just about manages to hold them together convincingly.

Perhaps the biggest failure of the film is neither on his part nor on that of the actors but down to the marketers who are selling it more as a science fiction film that seems to promise a tale about the excitement of the discovery of what you might find on a planet like ours, when it’s truthfully an earthbound drama about loss and guilt, where the science should be read less literally than as a metaphor for our dreams.