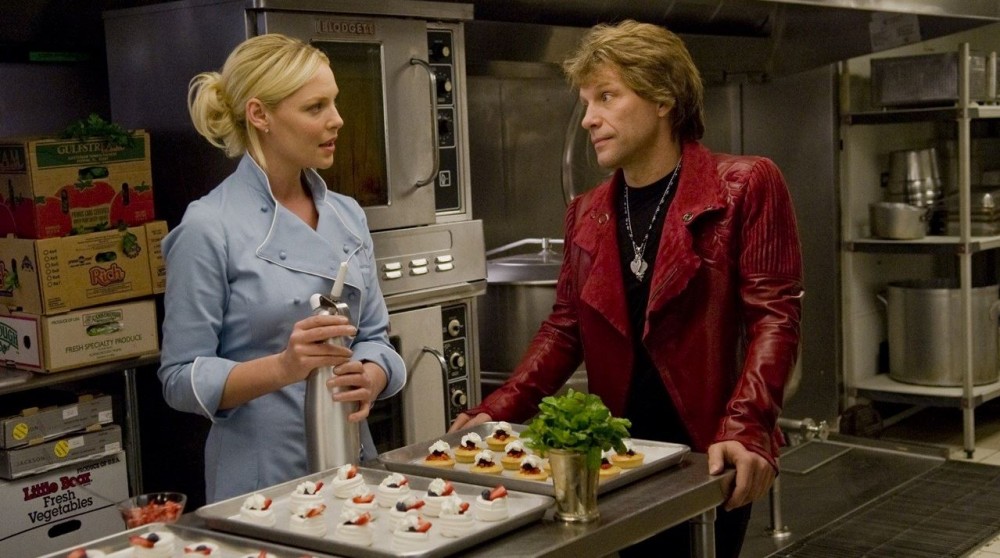 Claire (Hilary Swank) and her team are responsible for ensuring that the famous ball of lights drops over Times Square, but they’re having technical problems.

It’s a bit night for Laura (Katherine Heigl) too. She’s a catering her biggest ever party – thrown by a big record company in honour of its biggest artist, Jensen (Jon Bon Jovi), who happens to be an old flame of hers.

After singing at that party, Jensen is due to rush off to provide the entertainment for Claire at Times Square, but his main back-up singer Elise (Lea Michele) is stuck in a lift with her cantankerous New Year’s Eve hating neighbour Randy (Ashton Kutcher).

Kim (Sarah Jessica Parker) is trying to stop her teenaged daughter Hailey (Abigail Breslin) going out with her friends.

Tess (Jessica Biel) is about to give birth and is hoping for the prize money that comes with having the first baby of the year. Elsewhere in the hospital, Stan (Robert De Niro) is close to death and hoping to be taken up to the roof to see the ball drop for one last time.

Businessman Sam (Josh Duhamel) is rushing back to Manhattan from a remote wedding to give a speech at his company Christmas party and then meet up with a mystery woman he met at last year’s New Year’s Eve party.

Where to start? There are so many characters that stereotypes are inevitable, we never get to know any of them well enough to care about them and we forget who knows whom, which kind of dampens the effect of what are presumably meant to be twists in the tales as some of them come together towards the end.

Too many characters also means a plethora of stories – intercut, but mostly not intertwining. Will Claire get that Times Square ball working? Will Tess have the first baby of the year? Will Sam meet the woman of his dreams again? Will Ingrid start to feel a bit better about herself? Will Stan get to see the Times Square ball drop one last time? Will Laura make up with Jensen? Will Elise get out of the lift? Will anyone still be awake by the time the two-hour ordeal is over?

With so much going on, Garry Marshall is clearly trying to make sure there’s something for everyone, but in truth, there’s nothing for anyone – it’s so out of touch with reality; in what world would a middle-aged soft-rocker be the world’s most successful pop-star.

So many stories, which are variously clunky, laboured, schmaltzy, shallow and contrived – even the out-takes over the closing credits are staged; a woman giving birth to DVD copies of Garry Marshall’s last film Valentine’s Day? Fans of the director’s earlier work, such as Pretty Woman and Frankie & Johnny, will be wishing that HAD been his last film.

This ill-judged mess was clearly meant to be the feel-good film of the year, with a host of Oscar nominees lifting our spirits over the festive period, but every attempt at humour, pathos or even action misses its mark by a country mile and most of the stars embarrass themselves horribly, they’re all wasted – even demeaned and devalued.

Your sides won’t split – your heart won’t melt – the only physical reaction I had was to feel like I needed to be sick, when Elise started to serenade Randy in the lift, with the harmonies she was meant to be singing behind Jensen.

There were many more emetic moments, but my overwhelming emotion was pity for everyone involved. You can almost feel the cogs turning in their brains as they process each scene and tie this character to that one – but it’s arch and pointless.

There’s only one person alive who will like this film. His name is James Hacking, the writer and director of the low budget British romantic drama Loves Kitchen (he forgot the apostrophe, not me); his film is no longer the worst of the year.