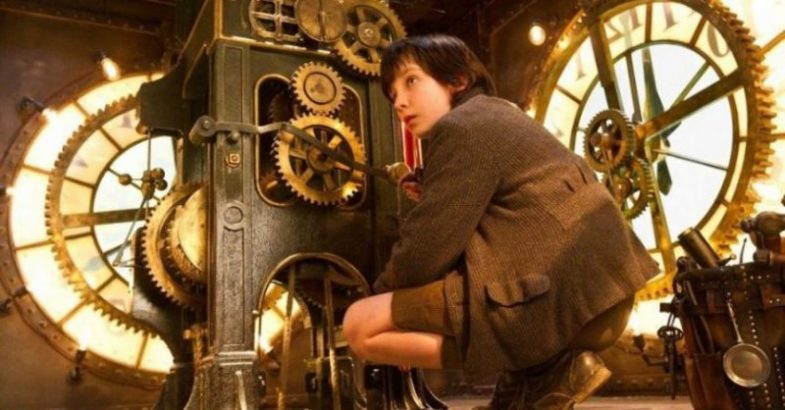 In 1930s Paris, young orphan Hugo (Asa Butterfield) secretly lives in a hidden room at Montparnasse station, winding the clocks by day and using his horologist skills by night to try to fix an automaton, which he hopes might have a message from his late father (Jude Law).

Spending most of his time in the rafters, Hugo braves the ground level only to scrabble around for spare parts and food, pocketing fresh croissants from Madame Emilie’s bakery or swiping cogs and springs from the toy shop run by the cantankerous old Georges (Ben Kingsley), all the while trying to outrun the station inspector (Sacha Baron Cohen), whose sole purpose in life seems to be to round up any unaccompanied children and send them off to the orphanage.

Hugo’s solitary existence is shattered by a meeting with Georges’ grand-daughter Isabelle (Chloë Grace Moretz), who helps him find what he needs to fix the automaton and discover the secrets it’s been hiding for decades.

This magical tale is one of the few films that seems to be lifted rather than suppressed by the 3D, starting with a sweeping camera movement that sucks you straight into its sumptuous station set and thereafter poking you with all manner of implements.

The film – so heavily dependent on its two lead child actors – is given the performances it needs to carry the story along, with Chloë Grace Moretz mastering an English accent – no mean feat for an actress of her age – odd, as it is, that these French characters all speak with English accents.

That said, with the rest of the cast – from Asa Butterfield and Sir Ben Kingsley to the smaller roles, including Sir Christopher Lee, Emily Mortimer and Richard Griffiths – being among the more familiar British faces, it’s perhaps more odd that Martin Scorsese has chosen to cast his first children’s film almost entirely with British actors.

From imposing sets that verge on the surreal to the clockwork machines and the saturated colours of the period setting, you almost feel that if it had been set in Paris, it would have been directed by Jean-Pierre Jeunet. Hang on!

The casting/language/accent issue aside, 3D or not, this film jumps off the screen and with its U rating, there’s enough to enjoy for the whole family.

But sadly, the film does have a substantial flaw. At more than two hours in duration, it’s far too long for a children’s film and it stretches to that length by virtue of the fact that it feels like two separate films stuck together; one is about a young boy, hiding in a railway station, who befriends a young girl who helps him fix a machine he hopes will have a message from his late father; the other – and this is going to sound like a bolt out of the blue – is about one of the most innovative founding fathers of cinema, who’d fallen on hard times and lost his entire archive, selling toys in a railway station, until the combined efforts of an intrepid young child and a film scholar restore him to the glory of his youth.

What starts off as a boy’s-own adventure turns into Scorsese’s love-letter to the special-effects laden early works of Georges Méliès.

Modern-day children, who pass what time isn’t spent playing computer games communicating using the facebook app on their smartphones might not get as excited as an old-timer like Scorsese about how Méliès recreated the bottom of the sea or the surface of the moon.

Hugo ends up being as much a vanity project – worthy and laden with good intentions for cineastes as it is – as it is a thrilling action film for kids.

Combining these two separate films might have worked better had they been intertwined rather than laid end to end.

For lovers of film, it’ll feel like a slightly clumsy but no less magical ride – for regular cinema-goers, children might like to switch seats with their parents, or even grand-parents, about half way through.