With the briefest of statements, the producers of the long-awaited 25th instalment of the James Bond franchise have announced that’s release has been delayed again. 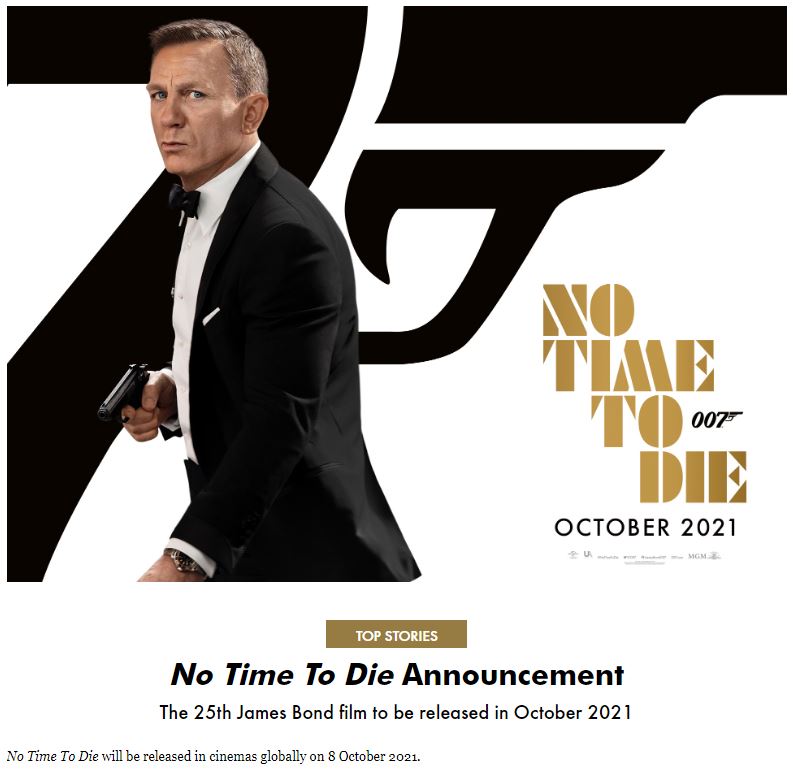 In a sign of the continuing turmoil within the film industry, the production company EON and studio MGM have delayed the theatrical release from April until October; No Time To Die – Daniel Craig’s final outing as 007 – was originally scheduled for release in April 2020, before the cinemas – and other indoor entertainment venues – were closed to prevent the spread of Covid-19.

The new statement (left), released on the official 007 website, makes no reference to the pandemic, announcing the new release date as if this is the first anyone has heard of the film.

The film is one of many blockbusters to have had their releases delayed as a result of uncertainty; among the major studios, only Warner Bros has braved putting big films into cinemas, with Tenet‘s release last summer, but the studio has since come under fire from film-makers and exhibitors for saying that it’s entire 2021 catalogue will be launched online at the same time as hitting the big screen.

Universal and Sony have already followed suit, delaying the launch of some of their titles scheduled for release early this year, with fans having to wait longer to see titles including Nobody and Ghostbusters: Afterlife.

Some cinema chains – many of which had already limited screenings to weekends, even before the current UK lockdowns forced them to close again – had warned that the delays of such major releases were making the exhibition side of the industry unviable.