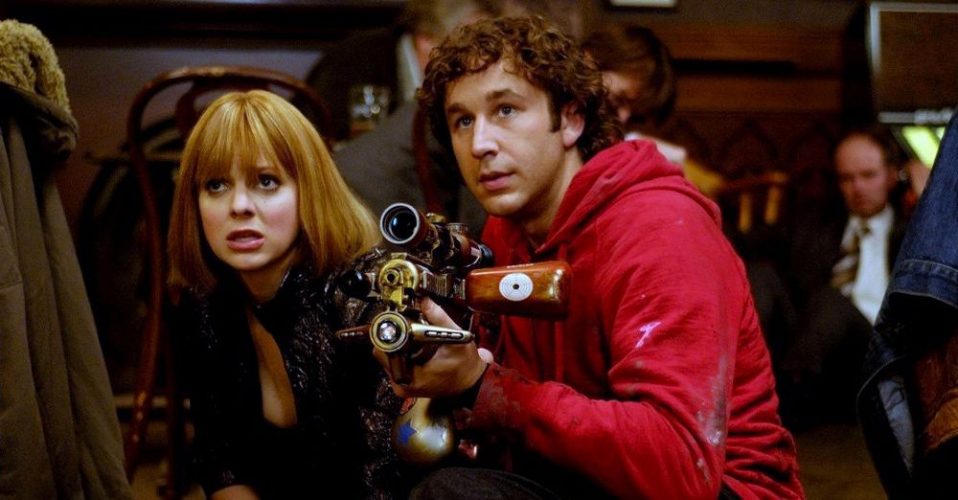 Theme-park employees Ray (Chris O’Dowd), Toby (Marc Wootton) and Pete (Dean Lennox Kelly) head to the pub after a hard day’s work, during which Ray was sacked for scaring the children and Toby and Pete were humiliated, handing out leaflets dressed as dinosaurs.

Their conversation tells us that Toby wants to be a screenwriter, both he and Ray are sci-fi nerds and Pete’s more of a sceptic – so all the antithesis you need for a good character comedy, right? Sadly not.

When Cassie (Anna Faris) turns up and tells Ray that she’s come from the future to fix a time-leak in the gents’ loos at the pub, he’s unsurprisingly a little taken aback.

But soon, the three of them find themselves whizzing through time – in and out of the gents’ – through a future where they’re famous – and an even further future where all humankind has been wiped out. They find themselves in alternate realities – watching themselves from afar and doing their best to avoid their future and past selves – all the usual staples of time-travelling.

People have said this does for sci-fi what Shaun of the Dead did for zombie films – it tries to, but it fails.

Time travel has been done so many times before – but it’s never felt so pointless before. Most of the gags are cheap or fall flat.

Without enough in the budget to move around between different locations, they have come up with a story which allows them to move around between different time-zones in the same location – fake beards and ripped jumpers don’t cost much, and cheap-looking CGI clearly costs less than building new sets or taking the entire cast and crew to a new location.

And that’s the thing – the whole film screams cheap – and throwing in Hollywood’s Anna Faris doesn’t make it look any more costly.

It feels like a very stretched out pilot episode for a low-budget sci-fi (sorry, SF) sit-com – perhaps a pretender to the crown of Red Dwarf – but by stretching it far beyond the limit of elasticity, there’s no going back – there’s no rescuing anything out of this – it’s already too tired to try it on the small screen where it would have been more at home.

The most frequently asked question by anyone watching this film is likely to be “what on earth is this nonsense I’m wasting my time watching? I wonder if I can nip to the gents and go back a couple of hours and get that time back!”