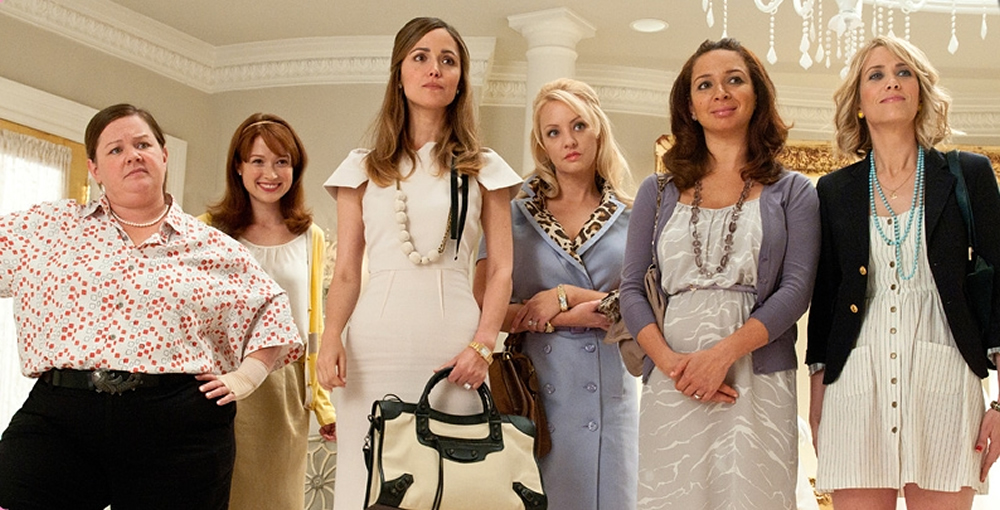 Annie (Kristen Wiig) is delighted to be asked by her best friend Lillian (Maya Rudolph) to be the chief bridesmaid at her wedding.

Apart from anything else, for a while, it takes her mind of her smarmy lover, Ted (John Hamm); for her, it’s a relationship but for him, she’s no more than a no-strings-attached friend-with-benefits – without so much of the friend part.

Yes. Annie is insecure. And this wedding is just what she needs to boost her self-confidence, especially since her baking business has just collapsed, leaving her scratching around to pay the rent.

Everything is going well until the engagement party, where Annie finds herself competing with wealthy subordinate-bridesmaid Helen (Rose Byrne) to make the best speech.

This is only the start of a seething battle to find the best gift, book the best hen-weekend and generally be the best bridesmaid and best friend.

It’s no longer about the bride – it’s all about her bridesmaids.

When Annie feels that she’s losing the battle, she starts to go off the rails, until she has a run-in with a jobsworth police officer Nathan (Chris O’Dowd).

Can he get her back on the right track in time to lead the bridesmaids up the aisle or will Lillian wish she’d just eloped?

Although directed by TV-specialist Paul Feig and co-written by star Kristen Wiig, it’s produced by Judd Apatow and has his fingerprints all over it.

Blending gross-out humour with profound interpersonal relationships, true revelations about life and genuine warm humour, Bridesmaids sets out to be “The Hangover for Girls” and pretty much hits the mark.

It’s set in a hyper-reality where apart from Maya Rudolph’s bride, every other character without exception is a stereotype of comedy films, who does and says nothing any person you or I know would – but in the context of the crazy japes and capers they find themselves involved in, it largely works.

Wiig completes her rise from small roles in early Apatow films, through TV’s Saturday Night Live to her first leading movie role and shows that there’s hope for women in their late-thirties who are still hoping to crack the big time. Her comic timing is impeccable and despite her breakdown, she manages to keep the audience onside.

Rose Byrne plays the “comic perfect-evil” blend we saw most recently from Lucy Punch in Bad Teacher with delightful precision.

The rest of the eccentric group of bridesmaids, including Melissa McCarthy’s overweight, flatulent future sister-in-law, with a higher sex-drive even than Annie’s beau Ted, graciously accept the job of providing the set up for many gags and the being butt of others, as loveable loser Annie and wily winner Helen ratchet up their rivalry.

As you might expect, the plot begins to get a bit out of hand as the film tries to make the battle of the bridesmaids bigger and more brutal and the wedding finale is turned into an emetic box-ticking exercise to round up the film on a high note.

But while it’s often corny and predictable, much of it feels fresh – not least seeing a bunch of women get to behave in a way men have previously claimed a screen monopoly on – and John Hamm’s deliciously odious cameo will ring some nasty bells for many of the film’s target audience.

But although it’s clearly aiming at the thirty-something women, the beauty of the Apatow formula is that men won’t feel left out.

It’s a gross-out comedy with a heart and broad-appeal. But not universal appeal. And it has very many flaws – mostly at the plotting level – but the film is entertaining enough for most of them to be forgivable, if not excusable.