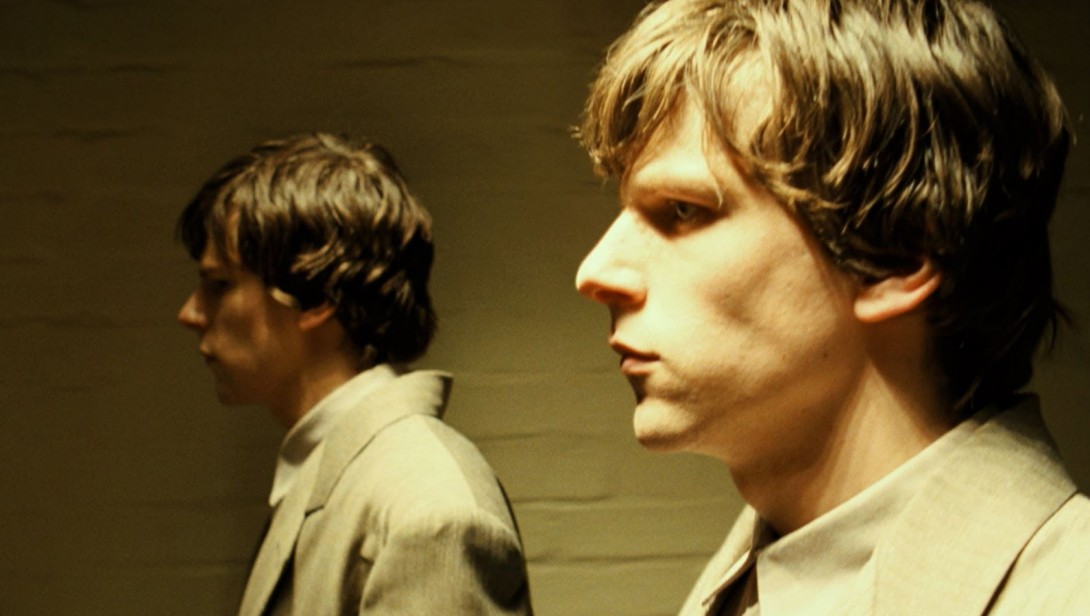 Simon James (Jesse Eisenberg) is a bit of a nobody. Shy and lonely, in a somewhat dystopian world that’s not too dissimilar to our own, he is a data processor in a large corporation where there’s almost no scope for personal development – seven years into the job, he’s very much the unknown new boy.

With a crush on the beautiful young Hannah (Mia Wasikowska) , who works in his firm’s photocopy room, he breaks his own printer to give himself an excuse to see her by day, while by night, he watches her longingly – with his telescope – from his flat across the courtyard from hers.

Beneath the surface, though, the pair could not be more different. Named James Simon, this double – oozing confidence, both professional and sexual – quickly finds himself climbing the greasy poll at work while he swiftly works his way through all the local women, including Hannah.

What begins as a cautious friendship between Simon and James soon develops into a deadly rivalry; is there room in this world for the both of them?

From the opening scenes, featuring Jesse Eisenberg’s Simon moping down dark grey corridors and sitting in his dingy cubicle, inputting data into a 1980s style computer with huge ducts covering the ceilings, Terry Gilliam’s Brazil becomes a haunting presence, but as The Double unfolds, you won’t be berating Richard Ayoade for borrowing from Gilliam; rather you’ll be wishing Gilliam had chosen a project like this over his disappointing Zero Theorem.

Ayoade shows himself to be a passionate cinephile as doubles of classic film image after classic film image appear on screen – Krzysztof Kieślowski’s A Short Film About Love is another clear influence – but it feels more like he’s enthusiastically sharing his passion with us than plagiarising the work of his predecessors.

For his second feature, after the rightly acclaimed Submarine, Ayoade has concocted a peculiar reimagining of Dostoyevsky’s novella of the same name, transposing it to – well – it’s not entirely clear; there are a mixture of accents from all over the anglophone world –  Wallace Shawn’s American manager, Noah Taylor’s Australian colleague, James Fox’s English boss, Craig Roberts plays a distinctly Welsh policeman – and the the costumes, sets, props and vehicles date it to, well, in Brazil parlance, somewhere in the twentieth century.

The success of this film depends on two convincing performances by Eisenberg, who plays the lonely loser and the confident climber with equal ease, looking and sounding identical yet distinct.

But a film needs more than one performance – or two – to work and Ayoade’s direction effectively builds the tension as the doppelganger gradually takes over the original’s life and the script, co-written with Harmony Korine’s brother Avi, sharply tackles everything from personal problems to society’s ills with aplomb while continuously engaging the audience with a darkly comic, creepily quirky, psychological horror.

As well as skilfully developing the narrative and production design and creating a frighteningly believable and unwelcome world, Ayoade gives audiences a plethora of cameos to enjoy, from Submarine stars Craig Roberts, Paddy Considine, Sally Hawkins and Noah Taylor to his IT Crowd co-star Chris O’Dowd and most unexpectedly – not wanting to spoil anything for you – the reclusive Day Today star and Four Lions director Chris Morris.

After a successful debut as a director, Richard Ayoade has used his “difficult second movie” to confirm the former sitcom star’s potential as one of the most interesting voices in the next generation of British film.