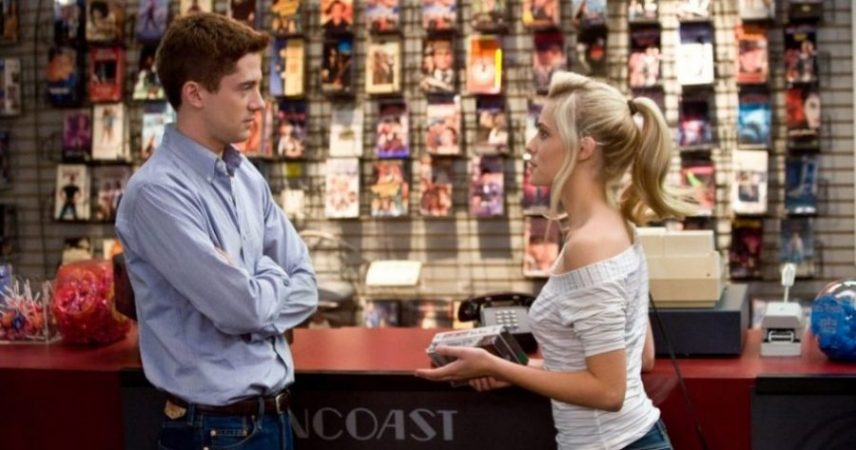 It’s the late 1980s and Matt (Topher Grace) is a highly intelligent and highly qualified graduate from the prestigious MIT university. But he never put his education to good use and ended up working at a video store at the local mall.

He’s been an equal failure in his personal life, never having made a move on the one girl he even wanted, Tori (Teresa Palmer).

When, out of the blue, she walks into the video store, he’s thrown into a panic, jumped out from behind the counter, contrives a meeting with her and claims to be a successful banker.

She invites him to a big school reunion bash at rich-boy Kyle’s (Chris Pratt) house. Is she interested? Is this his chance to put his life right?

Full-on 80s fun and frolics ensue as big hair, shiny jackets, gaudy colours and the pop music of the time form the backdrop of this tale of a mid-twenties loser getting a second chance to come-of-age.

This will take anyone in their thirties back to their youth and bring back memories according to how they enjoyed their own coming of age.

The cars, the clothes, the drugs, the hair-gel, the music – some viewers will spend the whole film smiling, others will want to flee the cinema before the end of the first act.

Putting the setting aside, the drama at the heart of Take Me Home Tonight is nothing new – a loser getting a second chance to make it, inspired by love – and coming up against the obstacles involved, such as lying to lure her in and then having to face the consequences.

Meanwhile, our protagonist’s twin sister is equally bright, but torn between putting her intelligence to good use with a Masters Degree in the UK or marrying a rich-kid boyfriend, with whom she clearly has nothing in common.

The casting is rather odd – clearly driven by the fact that Topher Grace is the film’s executive producer – but he’s cast himself (and indeed Anna Faris and Dan Fogler) as characters about ten years their junior – Teresa Palmer is the only one of the main characters who actually looks the age she is supposed to be playing.

Her character is also dramatically the most interesting – but perhaps inconsistent. She is angry with Matt when she finds out he lied about his job, but fails to get the irony that her morals are equally questionable; she agreed to date him only because she thought he had a good job. Corny – or clever? You decide. Your conclusion will depend on whether the 80s is a time you want to relive.

But anyone teetering on the brink of how much they’re willing to accept is likely to be pushed towards disdain by a surreally unlikely and peculiarly pointless sequence involving a giant metal ball, parked cars and a swimming pool.

If it weren’t for the fact that by that point, the film is nearly over, you can imagine cries from the cinema of “Take me home NOW!”