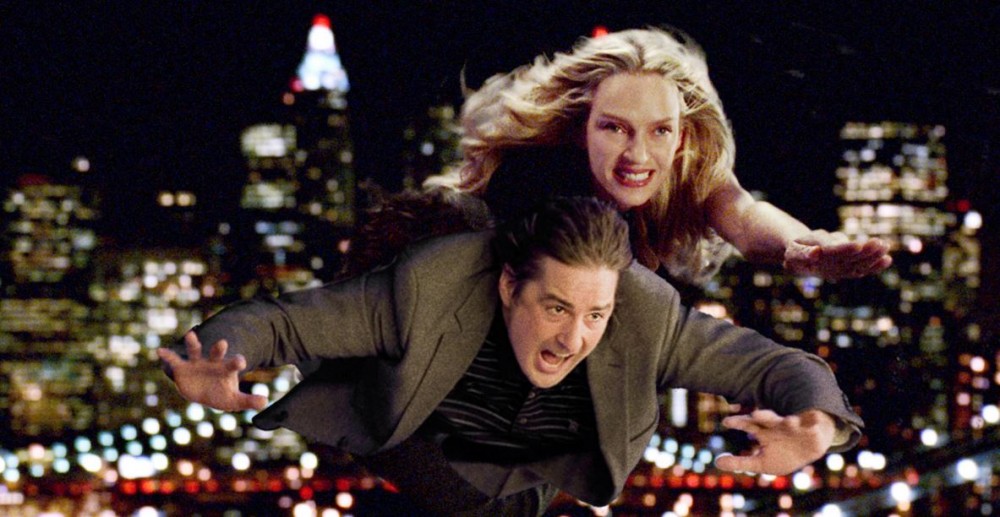 After a brief but exciting courtship, Matt (Luke Wilson) decides that his girlfriend Jenny (Uma Thurman) is a little too neurotic, demanding and jealous for his liking, so he decides to end it.

He should have known better – Jenny had only recently revealed to him her secret identity – just by removing her glasses and stripping down to her body-hugging leather underclothes, she revealed that beneath a frumpy exterior lay G-Girl – an all conquering super-hero of Kryptonite proportions.

If you’ve ever feared a woman scorned, imagine how a superwoman scorned might react – particularly when you start falling for the next woman in line.

She’ll stop at nothing to make your life even more miserable without her than it was with her.

As a last resort, Matt concludes that the only way he can move on with his life is by colluding with G-Girl’s nemesis – the über-baddie Professor Bedlam (Izzard) – who already has a plan in hand to bring her back to earth.

It works in both genres, successfully mixing the two, blending wry humour with satirical side-swipes at both types of film.

It has love rivals, flying humans – and sharks, and in Eddie Izzard’s Professor Bedlam, a bad guy who’d be equally at home in a Bond film, with his camp, ingenuity and desperation.

The super hero scenes are visually as impressive – if, understandably less ambitious – than those delivered in the recent Superman film – and they’re considerably more fun all round.

The emotional storyline certainly wipes the floor with the Man of Steel’s latest dalliance with Lois Lane.

It’s a tremendously good natured and knowing romp through cliché after cliché, with tongue firmly planted in cheek. As a result, any silliness and incoherence can be excused.

Ultimately though, it’ll be as enjoyable as it’ll be forgettable and it’s certainly inconsequential with a moral no more profound than a Looney Tunes cartoon.

But it’s not a film asking to be taken seriously. Just pop on your leotard, put your feet up and let Ivan Reitman take you for a ride.