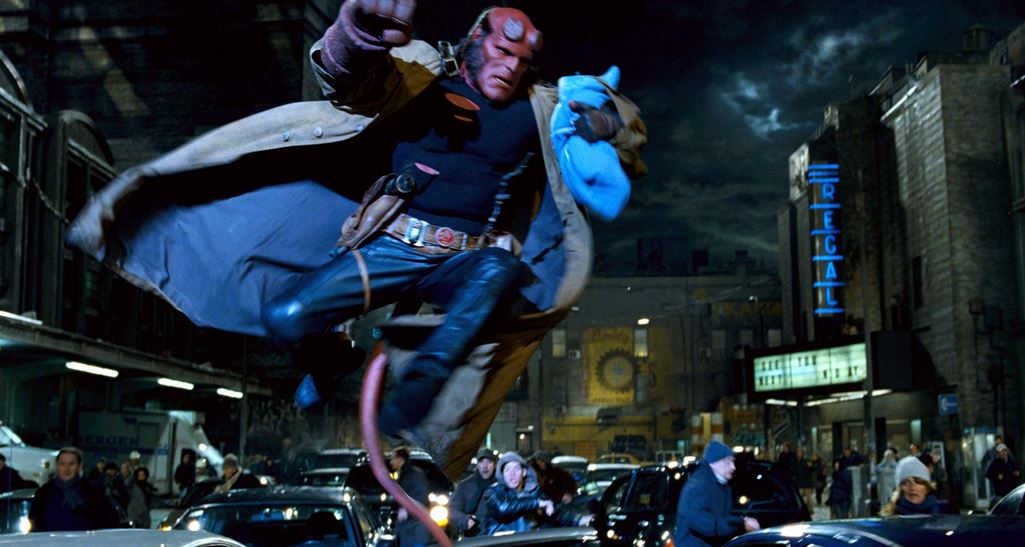 Centuries ago, the elf King Balor built a fearsome, all-conquering “golden” army of giant, mechanical soldiers, to help him defeat the humans in an age-old battle. He felt so guilty about the destruction they caused that he called a truce and took the army out of commission.
Under the terms of the truce, the humans have controlled the cities ever since, while the elves have run the forests.
To ensure that the Golden Army couldn’t rise again, King Balor gave a piece of the crown that controls it to the humans.
To the present day, and this artefact is being auctioned. As the hammer is about to come down, a facially-scarred albino swordsman, Prince Nuada (Luke Goss) bursts in, kills everyone in sight and gets away with the humans’ fragment of the crown.
Prince Nuada – the disenchanted son of King Balor – has been waiting for the right moment to rebuild the crown, awaken the Golden Army and take control of the world.
Can anyone stop him and his marauding mechanical monsters?
Only the misbehaving muscle-bound mutant Hellboy (Ron Perlman) and his friends at the Bureau for Paranormal Research and Defence have any chance of stopping Nuada in his path, in the latest action-packed outing for this comic-book creation.

I hope you saved yourselves – if you saw the latest instalment of The Mummy a couple of weeks back, you’d have seen the same plot, from the same studio, but without the spectacular eye of one of the most imaginative film-makers of his day, Guillermo del Toro.
His touch lifts a rather pedestrian storyline – good guys try to stop bad guy reviving a long-dead evil army to help him takeover the world (sound familiar, Mummy viewers?) – and turns it into a respectable fantasy, although it’s still well below his Pan’s Labyrinth best.
There’s really nothing special or exciting about this from an emotional or thought provoking point of view – although there’s no doubt that it’s a visual feast.
And it’s certainly fun, if you’re not after anything too demanding.
Ron Perlman, Doug Jones and Jeffrey Tambor are all clearly enjoying themselves, which makes the film all the more infectious.
“When will I be famous,” Luke Goss once sang. Well, despite being the scene-chewing bad guy in this big-budget Hollywood blockbuster, he still might have to wait a little longer for that dream to be fulfilled, as he’s so heavily made-up, you wouldn’t even know it was him.