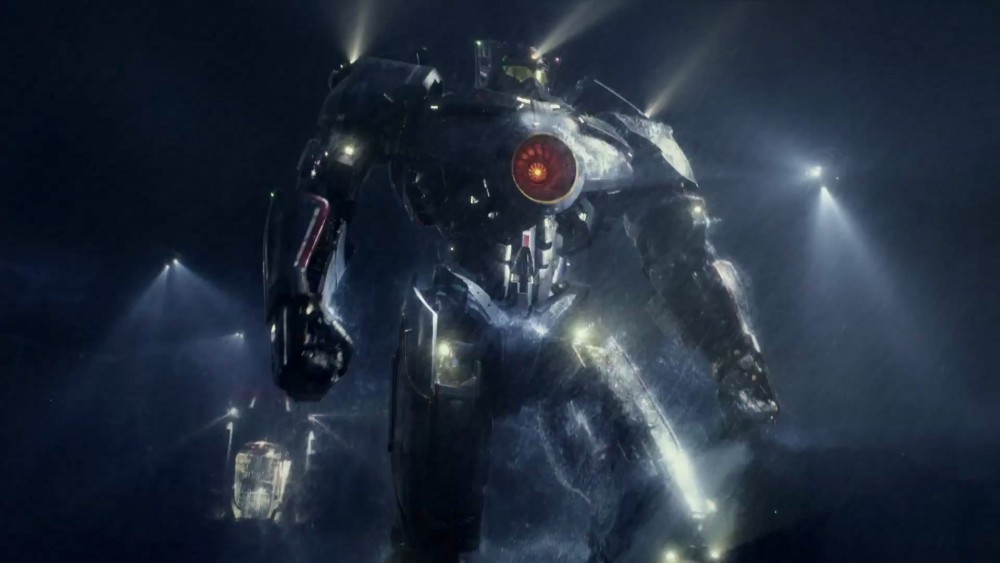 In the not too distant future, the Earth is being overrun by dinosaur-like beasts, known as Kaijus, coming up from the bottom of the Pacific Ocean. One by one, they emerge and destroy major cities around the world.

The human race is fighting back with giant, skyscraper-sized robots, called Jaegers, controlled by two pilots whose movements are mimicked by the robots.

When the authorities pull the plug on the Jaeger programme, the man at the top, Stacker (Idris Elba) has just a few months left to use the four remaining, obsolete and battered Jaegers, to protect the people until new protective walls are built.

But it soon becomes clear that the walls won’t work and Stacker, his four giant robots and his group of pilots are all that stand in the way of the Kaijus wiping out mankind.

This is the latest example of the big budget blockbuster, being sold on its high concept and special effects rather than its stars. Charlie Hunnam? Rinko Kikuchi?  Burn Gorman? Gone are the days that summer hits were carried with the likes of Tom Cruise or Will Smith. Oblivion and After Earth? Studios are realising that a big star can’t guarantee the success of a mediocre film and you don’t need a big star to throw effects and action at the screen.

And if effects and action are what you want, you’ll get it in buckets in Pacific Rim. It’s basically two hours of giant robots fighting giant lizards, with a few interludes here and there of fathers and sons bonding, upstarts threatening established heroes, underdogs coming good and people putting the future of humanity ahead of their own health – the stock plot points that could appear in any film.

Pacific Rim, in many ways, is Real Steel meets Cloverfield – people controlling fighting robots combined with giant lizards attacking major cities. It veers more towards the family friendly Real Steel than the horror of Cloverfield, and it would similarly appeal most to the kind of younger teenagers who enjoy playing computer games and whose fathers would prefer they get excited about robots killing dinosaurs than people killing people.

The main characters are, without exception, dull archetypes on which what acts as a plot hangs, but the supporting characters are more interesting, if a little irritating. Two rival scientists, battling each other to come up with the best solution to defeat the Kaijus – Charlie Day (from Horrible Bosses) and Britain’s Burn Gorman (familiar to viewers of The Hour and Revenge) – provide some entertaining diversions from the fighting, while Hellboy’s Ron Perlman’s steel-toe-capped cowboy-boot wearing crime boss provides some of the film’s best moments.

Although it explores an impending apocalypse and even touches on blaming anthropomorphic climate change, that’s largely an attempt to hide the fact that it’s nothing like as thoughtful as some of Guillermo del Toro’s previous work – such as Cronos, Pan’s Labyrinth or even the Hellboy films – but while not as imaginative, it’s certainly as much of a visual treat as you might expect from him.

There’s little genuine emotion and the narrative is pedestrian, but if it’s effects and action you like and you’re excited by the prospect of this being delivered by giant robots and city-destroying lizards, this is for you.