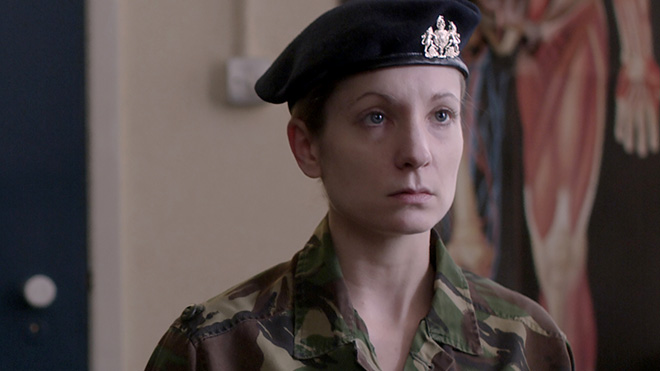 With the evident stress that soldiers encounter during a tour of duty in the theatre of war, it’s not surprising that bonds will be forged between them.

After a tour in Iraq, Suzy (Joanne Froggatt) has understandably grown close to the rest of her battalion, as they arrive back home in Middlesbrough.

But however hard the fighting itself is to cope with in the field, adapting back into everyday life back home is never easy in itself.

Suzy’s husband Mark (Mel Raido), himself a soldier recently recent from a tour of his own, is excited to have her home, but the hothead that he is, it seems that he’s just missed the sex and is none to please to find that that’s not the first thing on her mind when she gets back. She’s more worried that their young daughter doesn’t seem to want to know her.

When he realises that while in Iraq, Suzy formed a close friendship with one of her comrades, Paul (Andrew Knott), Mark concludes that he must be the reason for her lack of interest in him. And egged on by his mates, who remind him of his own sleeping around while he was on tour, he develops a fierce jealousy of Paul and takes it out on the unsuspecting young private.

Put Mark’s anger isn’t limited to Paul and Suzy – he also turns his venom on what he sees as the growing number of muslim neighbours who are ungrateful for the British blood shed in trying to bring order and democracy to their lands.

Brian Welsh’s theatrical debut is undoubtedly a powerful piece of drama – particularly topical at a time when we see the parades of British soldiers returning from previously Iraq and now Afghanistan – but once the news bulletins are over, we have no idea how they settle in back home.

At its heart, In Our Name is a heart-breaking drama about how the stress of army life tears families apart – but also about the personal tragedies of those involved and how their own experiences in battle colour their futures and their ability to move forward.

Welsh effectively handles Suzy’s inability to shake off the death of a child she witnesses in Iraq and Froggatt’s performance as a woman on the edge, slowly losing her mind just when she needs to hold it together, rightfully won her the Best Newcomer award at the British Independent Film Awards.

The film has a similar feel to Andrea Arnold’s Fish Tank, centred on young, alienated female characters on a housing estate, but despite some powerful flashbacks to the war, this feels too much like it was made for the small screen rather than the cinema and from Mel Raido’s over-acting to some of the loose and convenient plotting, it does at times feel a little like a feature length soap-opera episode.

It was a worthy nominee for the newcomer award at the London Film Festival that provides a fascinating insight into the minds of a group of recently returned soldiers, but what makes a particularly refreshing change is that it concentrates on the people rather than the politics.