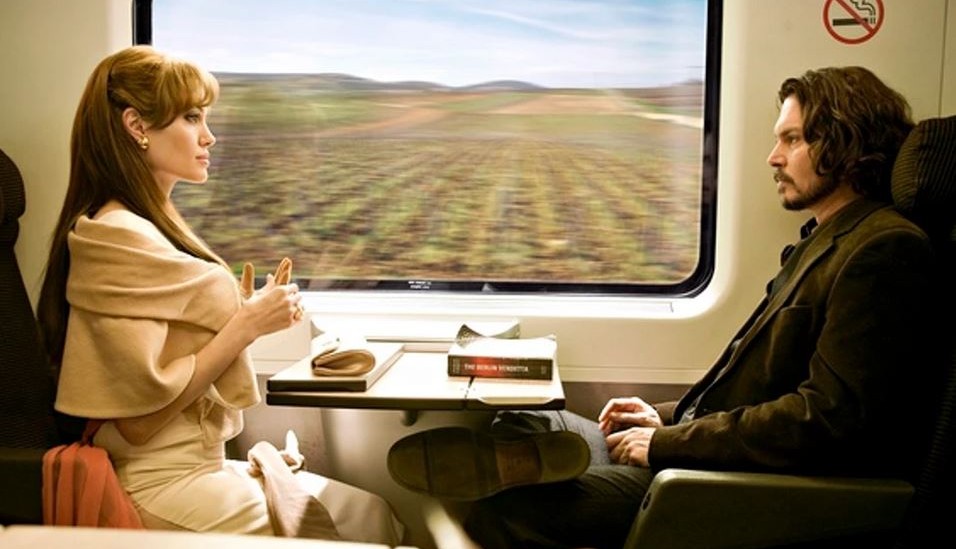 They don’t come much more elegant than Elise (Angelina Jolie), a gorgeous woman in gorgeous clothes, swanning around gorgeous cities, like the paramour of a fugitive billionaire tax exile, with debts to the Russian mafia, that she is.

No-one actually knows how gorgeous her lover Alexander is, because in the two years since anyone last saw him – including Elise – he’s had millions of pounds worth of plastic surgery and a new voicebox.

When Alexander starts dropping her notes, it tweaks the interest of the Interpol agents who’ve tailed her to Paris.

Following his instructions, Elise jumps on a train to Venice and latches onto someone who physically resembles Alexander, to mislead the authorities. The lucky man is American tourist, and ‘math’ teacher, Frank Tupelo (Johnny Depp), whose stay in Venice ends up being somewhat different from what he might have planned from the guidebooks.

With Scotland Yard’s Inspector Acheson’s (Paul Bettany) agents tailing them from one direction and Reginald Shaw’s (Steven Berkoff) ruthless Russian gangsters coming from the other, we’re set for a string of roof-top chases, canal-boat crashes, gunpoint stand-offs and – of course – Venetian glamour – in a nonsensical but enjoyable thriller.

It’s an odd one this. If you try to take it at all seriously, the story almost doesn’t work on any level – if you take things at face value, no-one would, in reality, act as they do, in almost any situation. And when the twists are revealed, they undermine more than they explain.

But if you don’t worry about the incoherence of the plot, there’s a lot of fun to be had here.

The chemistry between the mysterious Elise and the confused everyman Frank is titillating and the multi-lingual one-liners are frequent and usually hit the mark.

But more than anything, this is a fashion parade – a clothes horse – two beautiful lead characters in beautiful locations, wearing beautiful clothes, travelling on beautiful boats between beautiful hotels and beautiful balls, down beautiful canals in front of beautiful city backdrops.

After rising to international recognition with his Oscar-winning The Lives of Others, the Florian Henckel von Donnersmarck – the only film-maker tall enough to warrant such a long name – has followed up with an unexpectedly frothy thriller that, apart from the hi-tech surveillance equipment used by Interpol, wouldn’t have looked out of place in the 1940s.

It’s tough to criticise a plot that’s based on an earlier French film – although one could criticise the decision to remake a film that, despite starring Sophie Marceau and Yvan Attal, is known by almost no-one outside their families.

Equally, there’s no question that a film with three independent writers is going to lack direction, even if they’re the Oscar-winning director, Hollywood’s Christopher McQuarrie and our very own soon-to-be Lord Fellowes.

Some reviews have been cruel; if they genuinely thought they were making a classic thriller that would be fondly remembered in years to come, this messy and unconvincing story would be seen as an abysmal failure and such reviews would be more than fair.

But if we give them the benefit of the doubt and assume they set out to make a piece of confection, this frothy fun hits the von Donnersmarck.