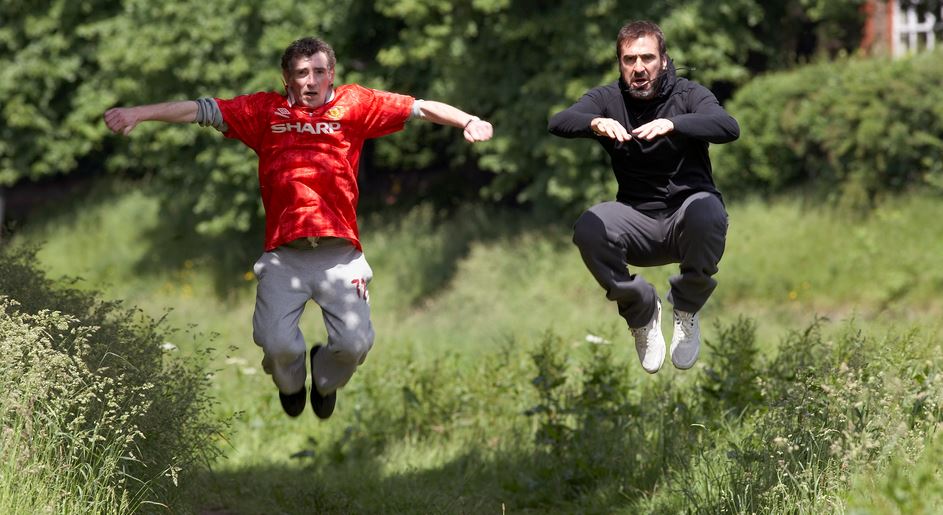 Eric (Steve Evets) is a middle-aged Mancunian postman, constantly depressed with regrets about his life – not least how he left the love of his life – his first wife – Lily (Stephanie Bishop).

The two remotely-related errant teenagers he shares his home with don’t help to cheer him up – Jess (Stefan Gumbs) is a lazy slacker, while Ryan (Gerard Kearns) is dipping his toes in the criminal underworld.

Eric’s fellow posties – blessed with such nicknames as Spleen and Meatballs – do their best to try to cheer him up. One even pulls the whole gang together for a bit of a self-help group. “Try to see yourself through the eyes of someone who loves you” is the challenge. One by one, they go around the group and find that they’ve each picked a celebrity – in the case of Eric, it’s his footballing hero namesake, Cantona.

When next we see him, Eric is in his bedroom, appealing to a poster of Eric Cantona for guidance. He practically jumps out of his skin when he gets a response – behind him, the man himself is sitting on his bed.

With the Frenchman at his side and his aphorisms giving his life a new direction, Eric tries to repair his relationship with Lily, while helping Jess and Ryan clean up their acts and get their adult lives off to a better start.

This is an uncommonly warm and humorous film for Ken Loach, taking his typical working-class character-base and adding an uncharacteristic fairytale air.

In that sense, it’s a thoroughly rewarding film that won’t alienate his loyal viewers, while it reaches out to a wider audience.

Unlike his recent big-screen turn in French Film, rather than playing a work of fiction, Eric Cantona is playing himself – or at least a version of himself – a godlike character from the wisdom of his words to the praise and honour that’s bestowed on him.

But Cantona is actually just the MacGuffin that propels Eric-the-postie to turn his life around.

The palindromic Steve Evets delivers a charming but understated lead performance as a slightly unworldly loser, determined to pull his life back on track.

The camaraderie of the postmen is glorious – and only highlights the frustrations Eric has in the various elements of his personal life, where the safety blanket of his colleagues his missing.

Whether you share their love of football in general and Manchester United in particular, you won’t be able to help by share their passion – for the game – for Cantona – and for the lessons they can learn from him.

For a wronged woman, Lily is really a bit to forgiving, but Loach himself can be forgiven because the film is so charming.

There is a storyline where the film appears to lose its way, as the character drama gives way to a brutal gang violence thriller, but just before you lose patience with it, Loach manages to draw it back in and tie the two separate films together.

This is done through a set-piece finale which is rather over the top, but the feelgood nature of the film makes you want to hug the film-makers rather than chastise them for the few liberties that they take.