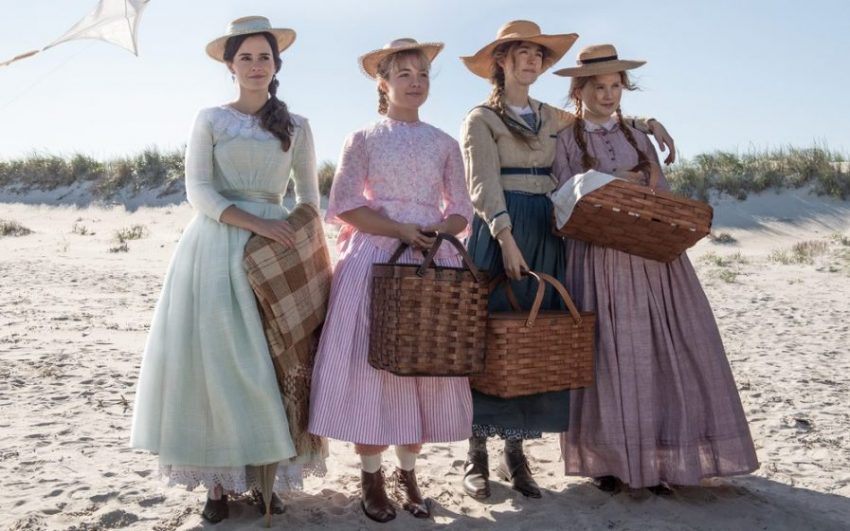 With the American Civil War coming to an end, four sisters are coming of age, as their father (Bob Odenkirk) is wounded, while away with the troops.

Jo (Saoirse Ronan) is a budding writer, with a crush on Laurie (Timothée Chalamet), the rich boy who lives in the mansion opposite.

Amy (Florence Pugh) wants to be an artist, the baby of the family Beth (Eliza Scanlen) has a talent for music and their big sister Meg (Emma Watson) just wants to settle down and have a family.

Under the guidance of their mother (Laura Dern) and wealthy aunt (Meryl Streep), the four little women are learning to be adults.

The classic novel – by Louisa May Alcott  – then picks up their stories, several years later – as the sisters have had varying degrees of success in achieving their life’s dreams.

Little Women is no stranger to being adapted for the screen – big or small. The sisters have been played by the likes of Katherine Hepburn in 1933, Elizabeth Taylor and Janet Leigh in 1949 and Winona Ryder, Claire Danes and Kirsten Dunst in 1994.

Once again, some of the biggest actresses of today – and tomorrow – are filling these central roles and do the best with what they’ve been given.

But for no good reason, the director Greta Gerwig has decided to fracture the time-line, mixing up the past and future. This serves only to confuse the unfolding of the narrative – not least because most of the actors don’t look any different, just a handful of years apart, so it often takes a while to work out which period we’re in, before we realise what we’re watching. This is particularly problematic, because there are times where different sisters like the same men or have the favour of their aunt.

Showing us excerpts from the past towards the start of the film also eliminates any dramatic tension, as it’s clear from the start where most of the sisters will end up. It also muddies the water when you realise the nature of the novel that Jo is trying to write.

At a time when women’s rights and sex-equality are rightly right at the top of the agenda in Hollywood and beyond, a film about four feisty young women should be able to run with the ball, but it seems to be rooted in the past, with nothing new to say – perhaps suggesting that inter-cutting the two time periods was an attempt to liven it up a bit. So it’s a timely adaptation – but a missed opportunity.

The most interesting characters have the least screen-time of all; Meryl Streep’s self-sufficient spinster, who insists that her nieces need to marry into money to survive and Tracy Letts’ publisher – balancing on the line of being happy to publish work by a woman, about a woman, but insisting that the main character is married by the end. But that’s not because he’s old fashioned – it’s because that’s what sold in those days – and, largely, still sells now.

At well over two hours, it all makes for a rather long and slow, tiresome period piece, lacking in drama, surprises or messages, with only the costumes, carriages and confidence of the characters to cement any kind of cinematic experience.