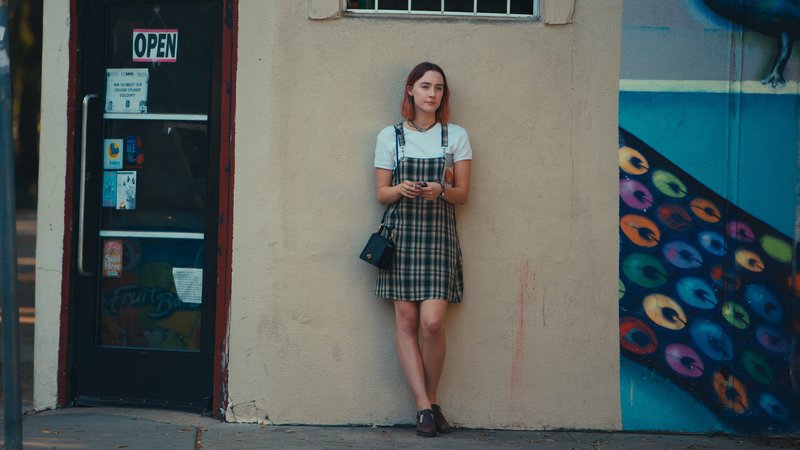 It’s 2002 and the best thing that seventeen year old Sacramento school-girl Christine (Saoirse Ronan) can say about life is that the year is a palindrome.

Her father (Tracy Letts) suffers from depression and has lost his job. Her mother (Laurie Metcalf) is an overworked nurse, doing as many shifts as she can to give her a good Catholic education and keep the family going. Her brother Miguel (Jordan Rodrigues) is a goth in a dead-end job.

Christine wants more for herself – a more inspiring name, for starters, so she calls herself Lady Bird.

During the course of her final year at high school, Lady Bird dips her toes into the whirlpool of falling in and out of love, falling in and out with her mother and her friends and falling foul of her teachers as she aspires to study in New York, where she hopes she’ll be able to spread her wings, expand her horizons and find herself.

Greta Gerwig has made a name for herself as an actress in a variety of slightly off-beat comedies and dramas. Here, for the first time, he has a go at writing a screenplay and directing it on her own.

She’s picked subject matter she clearly knows about – chiefly growing up and having a mother.

At the heart of this film is Lady Bird’s tender but fragile relationship with her mother – with both Saoirse Ronan and Laurie Metcalf delivering thoroughly convincing turns in their love-hate relationship. While both her mother and her convent-school teachers constantly put her down and destroy her hope, there’s just enough love thrown in for us to see that actually, they want her to fail to live up to her promise because they love her too much to lose her.

Tracy Letts is pitch-perfect as the depressive father who still has the altruism to try to protect his children from his own misery – and despite having nothing to offer but support, is Lady Bird’s most positive influence.

But this film doesn’t have anything new to say about anything. From the coming-of-age of a high-school kid to difficult relationship with parents to trying to impress the cool kids at the expense of your real friends, to trying to be better than your parents expectations – there’s nothing here we haven’t seen before.

While Lady Bird is oddly likeable for a pretentious, bratty teenager and her relationships with her parents are heart-breakingly real and tender, the film feels disappointingly stale.

What it does, it does tremendously well, but it doesn’t do anything fresh.