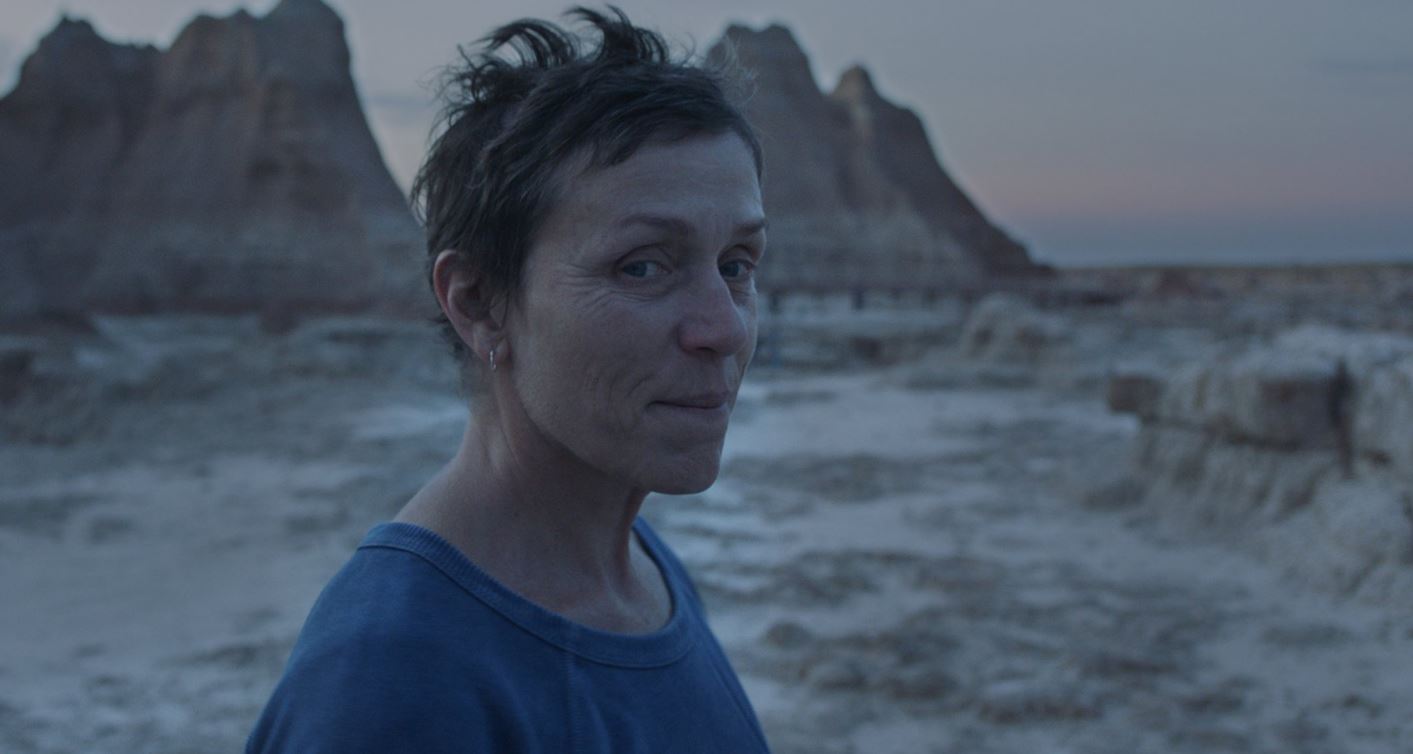 Fern (Frances McDormand) is recently widowed. The factory where she used to work has closed. There’s nothing left for her in Empire, Nevada.

She packs her possessions into a van and sets off to start a new life on the road, away from the humdrum of everyday life.

Pitching up at a motorhome campsite, she befriends a number of people – some lost souls, others found.

As she adapts to her new nomadic lifestyle, she moves from camp to camp, taking on jobs, enjoying the co-dependency as everyone rallies round but most of all, forging close bonds with kind, thoughtful people she’d never have met in her previous world.

One friendship, with fellow nomad Dave (David Strathairn), offers her the temptation of another permanent roof over her head but she still has ghosts from her past to extinguish, before she can find a new future.

Chloé Zhao’s Oscar-winning tale is a thoughtful meditation on the meaning of life, revealed through a group of lost souls who find themselves again through meeting each other in the great outdoors.

Frances McDormand’s Fern is our way into a slight story, which is more about making the audience stop and contemplate what’s important to them than about telling a traditional narrative.

Most of the supporting characters are played by non-professional actors – real-life nomads essentially playing themselves as they relate their own experiences to each other around the camp-fire, connecting to each other as they connect to nature.

Like living in a commune, they offer each other coffee, food, cigarettes and support, before they move on to their next destination.

As one of the first films to be available to cinema-goers post-lockdown, Nomadland certainly offers the kind of wilderness vistas that warrant being seen on the big screen and McDormand’s melancholic performance is perfectly pitched as a woman balancing on a knife-edge between grief and hope.

They’re not homeless, but houseless. Many of the nomads are running away from something in their lives – others simply seem to be moving on after someone else’s death or making the most of life before their own. One way or another, for many in the community, death defines their lives.

The film journeys at a slow pace as it follows people who’ve chosen a slower pace for their own lives and very little happens dramatically – apart from a  bit of van trouble. Everybody’s awfully lovely and friendly – there’s no-one out to take advantage of anyone else – it’s an hour before anyone expresses any frustration with anyone else – and that’s one of the few characters who’s not in the commune anyway.

Chloé Zhao shies away from anything resembling peril; she’s more interested in hearing the voices of the people who’ve chosen to live this nomadic lifestyle – voices that are rarely heard – voices that could offer hope to many to get through these difficult times.

In any other year, this Oscar Best Picture winner might have been a small film that slipped under the radar, but the lack of higher profile releases and the need for meaning rather than frippery have given Nomadland a boost that gives it a place in history.