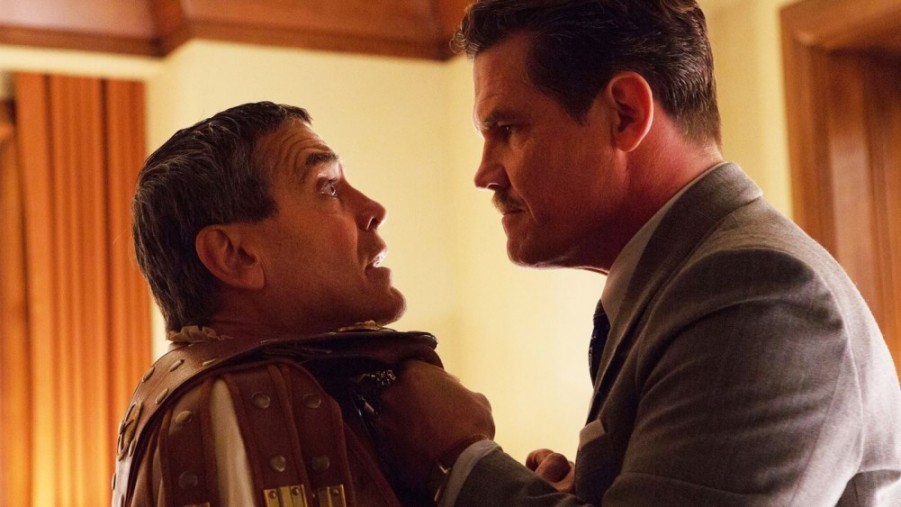 In the early 1950s, Eddie Mannix (Josh Brolin) is a studio executive – or more accurately, a fixer – for Capitol Pictures.

As he’s trying to keep the studio’s blockbusters on track and its reputation intact, he finds three of its biggest celebrities causing the usual kind of problems that he has to fix.

The studio’s siren DeeAnna Moran (Scarlett Johansson) is pregnant out of wedlock, which conservative film fans just wouldn’t accept. The studio’s fresh young face, Hobie Doyle (Alden Ehrenreich) turns out not to be able to act as well as he can ride horses. And Baird Whitlock (George Clooney), the star of a New Testament epic, has disappeared – kidnapped, as it turns out, by a group of Communist screenwriters.

As he tries to come up with solutions to all the studio’s problems, a pair of identical twins, rival popular journalists (both played by Tilda Swinton) are on the prowl for stories, a global aerospace firm is trying to persuade him to jump ship and take over as its boss (on more money and shorter hours) and he’s suffering a general crisis of conscience.

The Coen Brothers have thrown everything at this and most of it has stuck. There’s comedy, drama, intrigue, reliable performances, typically fitting cinematography and a sets and costumes that take you right back to Hollywood’s golden years.

But while it’s a highly entertaining journey, the destination is less than satisfactory – there’s little real insight into the characters, their lives, or indeed our own.

Most of the characters are based on real-life figures from 1950s Hollywood and many of the events depicted have some basis in reality too, giving it a sense of the “if it happened in a (Coen Brothers) movie, you wouldn’t believe it” for the uninitiated and turning it into a spot-the-reference for those well versed in the film’s provenance.

It’s particularly interesting to see Hail, Caesar! so soon after Trumbo, which suggested that the blacklisting of good men for their political views was scandalous, while in the world of the Coen Brothers, not only were the communists actively trying to get their propaganda into Hollywood scripts, but the Russians really were loitering just off the coast. Although the comic-book communism presented here might make you wonder why Senator McCarthy was so worried about them.

But the comedy is more knowing than funny and the drama is disappointingly flat – from DeeAnna’s pregnancy to Baird’s kidnapping, everything is resolved so simplistically that it’s clear that drama is not what the Coen Brothers are aiming for here.

So if the humour is broadly film industry in-jokes and the drama is lacking in tension, the film plays largely as a pastiche of 1940s and 50s Hollywood – and a love letter to its Golden Years.

Hail, Caesar! will delight many Coen Brothers fans – particularly those who share the film-makers’ love of their art and its history – but those unfamiliar with their work and that of their cinematic antecedents, might not be too clear what to make of it.

At its best, we’re treated to a number of entertaining cameos, such as Channing Tatum’s Gene-Kelly-type song-and-dance man and Ralph Fiennes as a director, who’s a parody of the kind of person many might once have thought him to be. But the communist clique is oddly lacking in either humour or bathos.

Its pacy structure, lightness of foot and glossy presentation will make it hard for anyone who knows what’s in store not to find it fun, but covering much of the same ground as Trumbo and putting the industry’s behind-the-scenes under the spotlight, and with a strong central character going through a personal crisis, the film might have been expected to feel more like it had a point or two to make. Instead, there’s not much point to this film.

Ultimately, you’ve got to worry about a film with this much punctuation in its title.