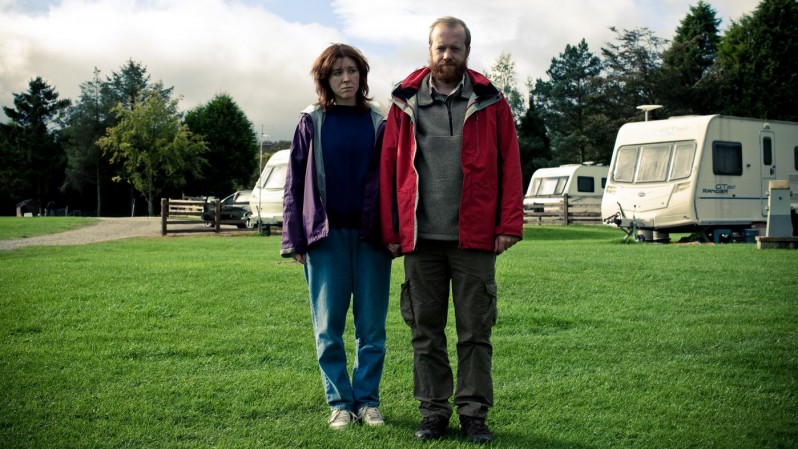 Tina (Alice Lowe) lives with her monstrously cantankerous mother (Eileen Davies) and their dog in a tiny house on a Birmingham estate.

Her life has recently starting looking up, with the arrival of a charming bearded boyfriend, Chris (Steve Oram).

Against her Mum’s wishes, for once, Tina asserts her independence and sets off on a caravan holiday with Chris, starting in the Midlands and working their way to Yorkshire.

It does the pair good to get away from home and see the country, breathing the fresh rural air, soaking up the natural world around them. They each grow as people and their relationship strengthens.

Oh – and every time they encounter an obnoxious, stuck-up fellow holiday-maker, Chris kills them.

Director Ben Wheatley burst onto the film scene with his explosive crime thriller Down Terrace two years ago. His uncompromising follow up last year, Kill List, won more critical plaudits and earned him a reputation as British cinema’s one-to-watch.

His third outing on the big screen – directing someone else’s script for the first time – vindicates the promise. The murderous road-movie Sightseers – certain to be his most mainstream success to date – hits all the right beats, shocking and entertaining in equal measure.

Written by co-stars Alice Lowe and Steve Oram, based on comedy characters they used to do on stage, Sightseers perfectly contrasts the banality of an English caravan holiday – lines of mobile homes in shapeless fields, nestled in rolling countryside, with little to do – with the brutality of a killing spree – although Wheatley manages to ensure that his viewers are firmly on the side of the murderers, as they dispatch the kind of irritating folk that give the English a bad name.

The violence is so matter-of-fact that it feels natural, yet when required, Wheatley manages to ratchet up tension, and Lowe and Oram’s performances keep the jet-black humour flowing.

There does come a point where the film becomes a string of murders, without having the originality of some comparable films – Natural Born Killers and Badlands, for example – but playing the violence for laughs turns it into a guilty-pleasure.

But in the final act, the team manage to regain control of the narrative and offer an ending that could not have been predicted earlier in the film.