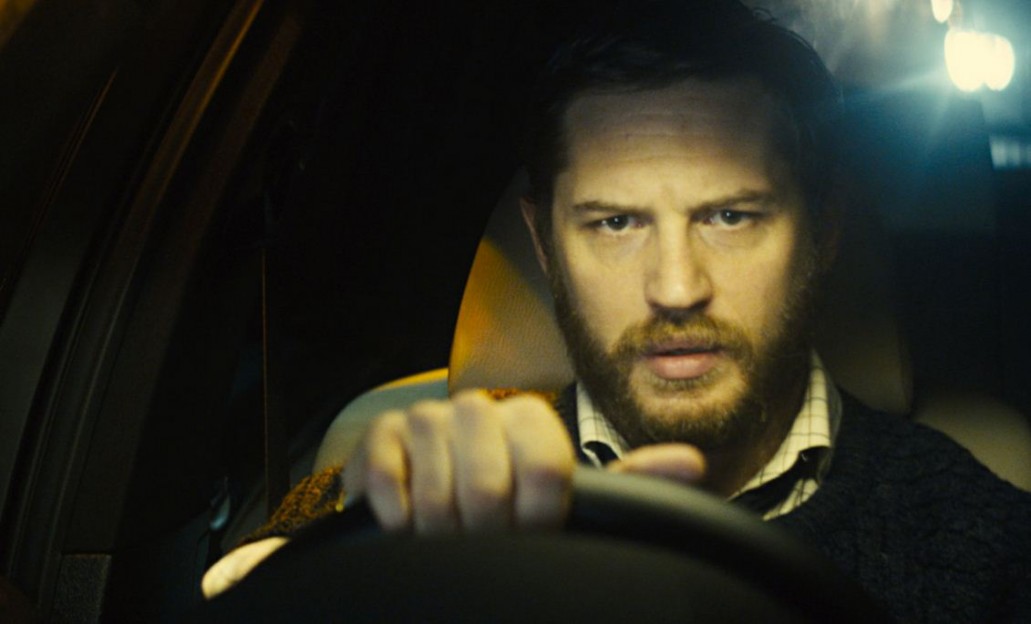 Ivan Locke (Tom Hardy) is the best at what he does; managing major construction sites. His building site in the Midlands is about to boast the biggest concrete-pour Europe has ever seen and he is the only man who can be trusted to make it work. But, for the first time in his career, he’s not going to be there.

One big mistake from nine months earlier has caught up with him; on a business trip, he slept with a stranger, Bethan (Olivia Colman), and got her pregnant. He’d managed to avoid telling his wife (Ruth Wilson) and football-mad sons until now, but Bethan has called to say that she’s gone into labour in London and the honorable man that he is, he can’t let her go through it alone.

In real-time, we follow Ivan’s drive down to London, as he makes a string of calls – hands-free, don’t worry – to try to keep his life – both personal and professional – on track; explaining to Katrina why he won’t be home to watch the match with the boys, reassuring Bethan that he’s on his way to help her through the birth, while trying to ensure that everything is in place for pour to go to plan.

As high-concept films go, this is as much of a text-book example as Buried (which saw Ryan Reynolds buried underground in a wooden box for the entire film) or Phone Booth (which saw Colin Farrell spend most of the film in the titular glass box); once Ivan gets into his car, the camera stays with him all the way and never ventures further away than a bracket on the outside of the vehicle.

This is a film that is visually one man in a car, talking to people on a hands-free phone, so we at least get to hear the other side of all his conversations. But that’s it. And it’s at night, so we don’t even see anything outside the car except for a blur of lights.

It’s a tremendously simple concept – man makes phone calls in the car on the motorway – and in the wrong hands, it could have been horribly dull. But evidently, the hands of writer-turned-director Steven Knight and actor Tom Hardy are the right ones.

Always impressive, Tom Hardy – better known as a hard-man in films such as Bronson and Warrior and Batman’s nemesis Bane in The Dark Knight Rises – delivers a surprisingly warm and sensitive performance with little more than his head as a conflicted Welshman whose code of honour means that he doesn’t want to let anyone down – his bosses, his wife, his kids or even the woman he got pregnant on a one-night stand – he has a fierce loyalty to everyone.

The film passes no judgement on him – he’s made a mistake and he knows it and he just wants to put it right – even if that risks everything else in his life.

In addition to remaining both interesting and thought provoking throughout, Locke is consistently visually arresting, despite a paucity of opportunity; some of the shots out of the car window, with blurred tail-lights and street lamps, are simply gorgeous – worthy of a still to hang up on your living room wall. Given the claustrophobic nature of the film, the camerawork opens up the canvas.

The film’s one failing – and sadly, it’s a big one – was its determination to stick so rigidly to its high concept. Being such a slave to a format that almost seems like it could have been given out by a film-school teacher, Steven Knight breaks the cardinal rules of screenwriting; essentially, he sets up two questions – (1) can he make the concrete pour work in his absence? and (2) can he save his marriage? – but without wanting to spoil it, in a real-time film that comes in at less than an hour and a half, he can’t possibly answer them.

Of course, film-makers don’t have to answer every question, but if a screenplay follows the famed “three act structure,” the first introduces the protagonist and sets up his goals while the next two acts follow his journey as he tries to achieve or reach his goals. So if this film sticks not only to the “staying in the car with Locke” rule but also the “real-time” rule, it will have to finish long before the concrete pour is due to start, long before he’ll get to sit down and explain things to his wife and – traffic and nature depending – possibly even before he gets to London for the birth.

Narratively, of course, a writer has every right to say the audience has to do some work and doesn’t need to be spoon-fed, but with such a short window into a life that’s going to be changed dramatically by this night’s events, in reality, decisions made in the heat of the moment – whether by him, the women or his bosses – might be different the following morning, after a little time for reflection.

This, then, makes Locke not about whether the eponymous protagonist will be able to achieve his goals within our time, but how he deals with the fact that he has got himself in such a mess. It becomes more about Tom Hardy’s ability to carry the project and to hold our attention than what the outcomes might be.

Once we’ve got over his inexplicable but perfectly acceptable Welsh lilt, it’s fascinating and admirable watching him flip from one phone-call onto the next, remaining as calm as he can in the circumstances, with the only thing stopping him from pulling his hair out being that he has to keep his hands on the wheel. We identify with him and wonder how we might cope in a similar situation – but what do we learn? Apart from “don’t get into a similar situation,” we learn that he can drive, that he can think about lots of different things while he’s driving and we learn a lot about the qualities of his character – but this is all first act material. In effect, we’re being shamelessly told in advance that we’re going to the cinema to watch only Act One.

Similarly, there’s a tremendous array of voice talent being thrown at us, but – as with the celebrities who used to “phone in” to Frasier – when we can’t see who he’s talking to, much of our brain power is extended trying to work out who that familiar voice belongs to, when we should be engaging more in the story.

Locke is worth watching for Hardy’s compelling performance, the surprisingly effective cinematography, the neat unfolding of the situation through a well-paced script, but ultimately, it feels like Knight had a good idea without really knowing where to take it. It’s more admirable than satisfying.

Perhaps the parameters of this film-school exercise were just that bit too rigid for him to secure a distinction.