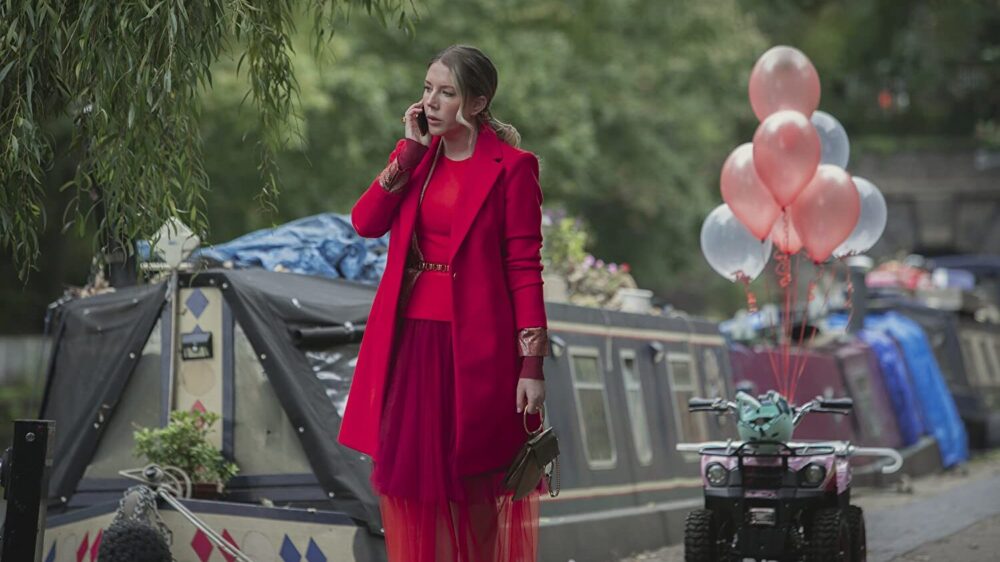 She’s promised her daughter a sibling – and however much she despises her ex, she thinks it’s best for the two children to share a father.

Shep (Rory Keenan) used to be in a successful boy-band but is now living in poverty on a canal boat.

As if this isn’t all complicated enough, Katherine is now in a relationship with a loving, reliable dentist, Evan (Steen Raskopoulos), who’s ready to move in with her and Olive.

But Evan – as you might imagine – isn’t quite on board with the idea of his girlfriend trying to have a baby with her ex.

Canadian Katherine Ryan has long been a staple on British TV as a much-loved stand-up comic, but there are few laughs and not much love on display in her first scripted comedy vehicle. Created and written by Ryan, it’s a study of being a single mum in London that has echoes of the recent BBC hit Motherland, with parents sparring at the school gates as they take out life’s other problems on each other.

But rather than being an insightful exploration of parenthood, The Duchess is more of an angry rant – but without a coherent target.

Ryan doesn’t seem to be angry at anything or anyone in particular – she just seems to find comfort at shouting explicit insults at everyone from the Mum of her daughter’s school bully and an unsuspecting social worker to her minor-celebrity ex and the only man with the patience to give her the time of day.

She seems to be presenting herself as a feisty feminist, fiercely protective of her daughter – but to the exclusion of charm, empathy – and most importantly, warmth or wit.

Presumably, this is meant to be a comedy, but while the situations are perverse and at times surreal, there is very little to laugh at. Audiences will mostly be left feeling pity – for the victims of her verbal abuse – and or the entitled, selfish woman at the heart of the series who doesn’t seem to have a hope of happiness.

The arrival of Doon Mackichan provides a little light relief in episode 5, but apart from her, The Duchess is a little over two hours of spiteful bile that dampens any prospect of levity or depth. The only break from the darkness is Ryan’s wacky wardrobe.

It’s not even clear who we’re meant to like – certainly not the central character – and there’s not really any sense of why she’s such an ungrateful, self-important, cantankerous presence – everyone has made bad decisions or had bad relationships – but not everyone behaves like Katherine. And unlike Peter Capaldi’s bile-spitting spin-doctor Malcolm Tucker in The Thick Of It, what Katherine screams just isn’t funny and usually has no substance to back it up.

There’s about enough plot in the whole series for one episode – too few characters feel in any sense real – and it seems almost cruel to dangle the tantalising prospect of a supporting role from her fellow comic Geoff Norcott, only to put him on screen only three times and denying him a single line; he’s literally little more than a nodding dog in the rear window as this vehicle drives away.