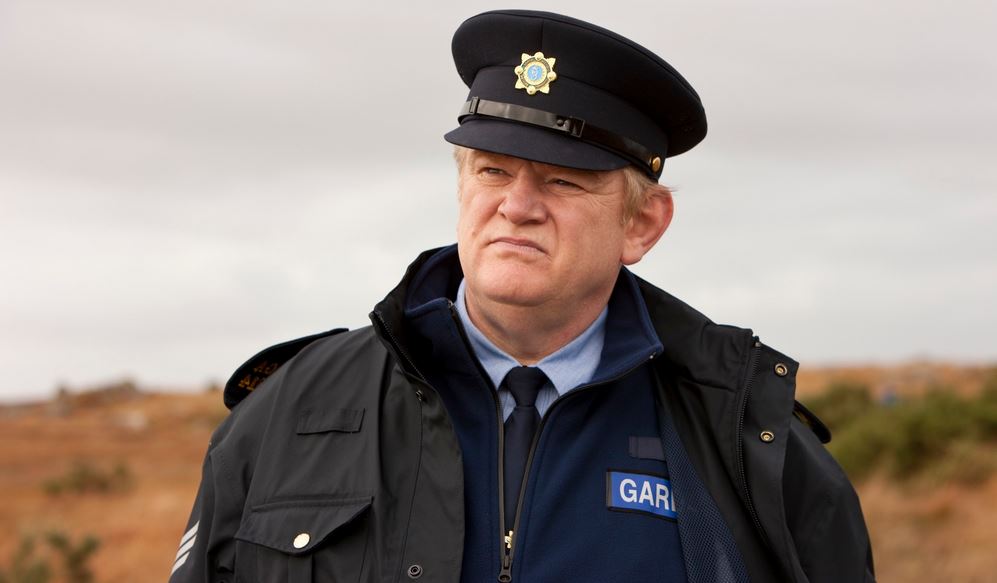 Sergeant Gerry Boyle (Brendan Gleeson) is the top dog at the police station in a sleepy coastal town in western Ireland.

He’s none too impressed by the arrival in town of his new partner from Dublin; a young city boy Aidan (Rory Keenan), who’s just a little too enthusiastic and conscientious for Gerry’s comfort.

The first case they have to deal with together is a rare fatal shooting that appears to be drug related. Aidan is shocked by Gerry’s devil-may-care attitude, but this is par for the course for one of the most idiosyncratic and plain-talking modern-day movie cops.

Gerry is summoned to a meeting of senior local police officers to be addressed by a visiting FBI agent, Wendell Everett (Don Cheadle), who wants the Garda’s help in catching an international gang of drug smugglers, planning to get a consignment ashore in Galway.

Gerry is a bit surprised that the black man is the one who’s trying to catch the dealers, rather than do business with them – and he’s not afraid to articulate this. In this sleepy Irish backwater, such ideas are so typical as not to raise an eyebrow.

Against a backdrop of gangsters, rough-justice and police corruption, Gerry’s quaintly racist sergeant is torn between whether he should rise to the challenge of single-handedly saving the world or sitting on his backside, drinking beer and enjoying the company of ladies of the night, as drug dealers and crooked cops do business in the shadows.

One one level, this is a perfectly enjoyable, visually stylised, darkly comic police procedural thriller.

On another, it’s a tour de force from Brendan Gleeson in a masterful, scene-stealing role, so impressive that it completely overshadows any shortcomings the flawed film might have.

As crime thrillers go, although creditable, The Guard is rather predictable, formulaic and largely unspectacular, not least from the point of view of the plotting, with a small gang making illogical decisions in a community where everyone bar the anti-hero protagonist is on the take. The resources thrown at this investigation seem rather over the top for a rag-tag group of a handful of misfits, yet the authorities, too frequently act in such as way as is required to nudge the story along, rather than how you would genuinely expect the characters to act.

In the case of rather too many of those characters, their existence is either expositional (we meet Gerry’s mother for no reason other than to allow him to show enough emotion to persuade us that he’s not quite as cynical as he first seems) or pointless (a whole backstory surrounding Aidan and his wife does nothing to nudge the plot along and serves no real purpose other than, perhaps, to help the film reach standard feature length).

Elements of the story – as well as some of the technical aspects – betray a modest budget.

But your ears will enjoy the snappy, acerbic and eminently quotable dialogue, your eyes will delight in the vibrant production design and your funny bone will be tickled by Gleeson’s outstanding, loveable anti-hero with a cracking sense of humour that keeps everyone – including the audience – on their toes.

Don Cheadle provides an effective foil for much of Gleeson’s bitterness and the ubiquitous bad guy Mark Strong is also worth watching.

As a dark, offbeat, Irish crime thriller, The Guard seems to be targeting the audience that enjoyed In Bruges, but apart from the two films sharing Brendan Gleeson and their directors sharing a surname (John Michael McDonagh is the younger brother of Oscar-winning Martin), this film falls short of its predecessor, in the scope of its ambition and the success of its storytelling.

But if you can handle a protagonist whose disdain for political correctness makes the Office’s David Brent seem like an exemplar of perfect manners, it won’t be long before you let your guard down and get carried away.