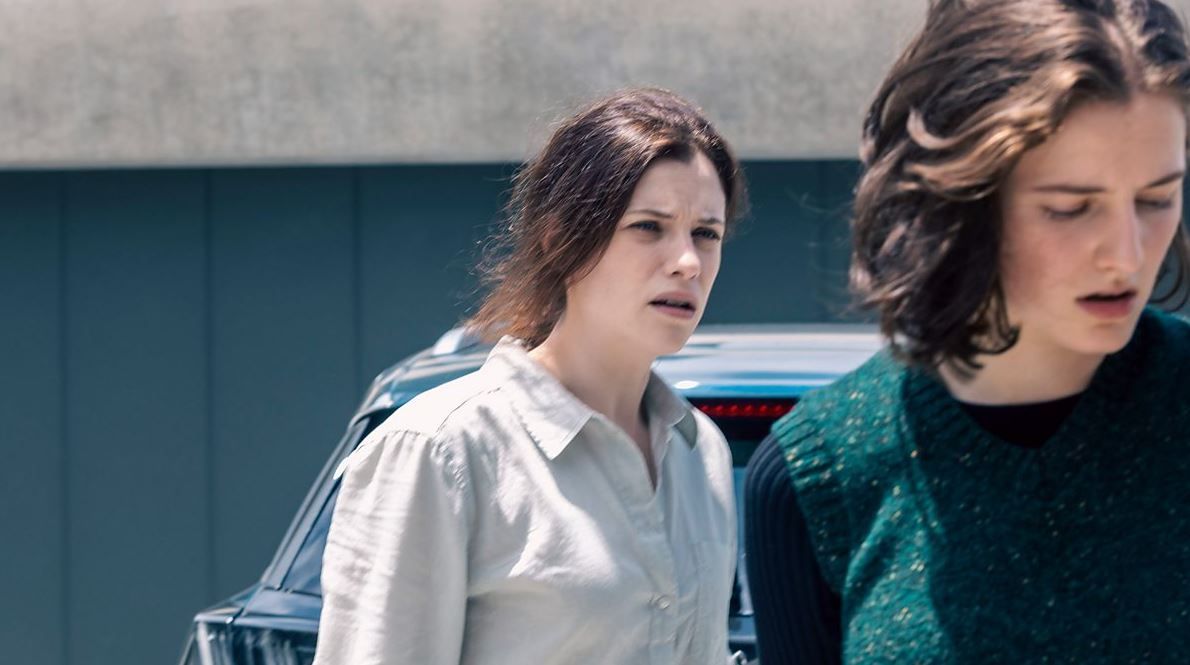 Two years after their son Ben was kidnapped, Meghan (Jessica De Gouw) and her TV journalist husband Jack (Todd Lasance) are still trying to put their lives back together.

A student journalist, Loralei (Miranda Frangou), is gaining traction for a podcast she’s presenting about the case, which is campaigning for a lenient sentence for the kidnapper, Agatha (Laura Carmichael), by presenting her as a victim of society’s ills.

Agatha is hoping that if she can move to a low security jail, they might let her have – and keep – a child of her own.

Feeling hounded by Loralei, cheated on by Jack, and with her sister dating a former flame who’s challenging for custody of one of her children, Meghan finds herself arrested by murder squad detectives, covered in blood – but whose?

There’s always a problem with what to do about a follow-up to a TV series that was based on a novel; where can you take the story once the book is over? And after the relatively neat and tidy end to Season One, you might wonder where there is to go.

The masochistic writers cruelly continue to dig their talons into poor Meghan, as if she didn’t suffer enough in Season One. When we first see her in Season Two, she’s in police custody, covered in blood, being accused of murder. We flashback to find out there are a whole range of people who have rubbed her up the wrong way – and viewers are taken on an effective wild-goose chase as they’re taunted with clues as to who might be dead – and how.

As the personal lives of the central characters become increasingly entwined, the plausibility of the ever-more-complex plot becomes stretched to breaking point, but it will keep you gripped – snarling at the unlikely events as they unfold, one by one – each more preposterous than the next.

But if you can accept the absurdity of the narrative, the imagination of the creators can’t be faulted, as they genuinely find compelling – if unbelievable – ways to keep you interested.

And it’s refreshing to find a police officer who’s actually more interested in securing justice than winning at all costs.

With most of the characters being familiar from Season One, it allows the plot to get going more quickly, improving the pacing of the story-telling. This also provides time for more ludicrous twists and turns to keep you guessing – if you can dismiss the implausibility of it all.

Rather than being a police procedural about a kidnapping, Season Two gets a chance to explore some worthwhile avenues, from failures in the Australian penal system, through infidelity and jealousy to misplaced loyalty. It cleverly swings you back and forth, between sympathising for a character and being angry at seeing them try to get one up on the system. Centring a whole subplot on a podcast makes the show feel contemporary – although some uses of technology don’t quite convince – not least a mobile phone that pairs with the blue-tooth system on someone else’s car – but only when the plot requires it to.

And at the heart of almost every element of this series is the bond between parent and child – as we see two dysfunctional families, battling with the ramifications of tragedies in their past – whether it’s children seeking their parents, children pushing their parents away, parents trying to win over their children or parents trying to avoid their children. And as the title might suggest, you get the impression that if people would only be a bit more upfront and less secretive about their lives, there’d be fewer misunderstandings with potentially catastrophic consequences.

Part thriller, part police procedural, part family drama, The Secrets She Keeps, Season Two, is a bold attempt to run with a group of characters, take them somewhere you wouldn’t have guessed – but while the journey is eye-catching, the ultimate destination – while left open for a potential third season – is about as unconvincing as most of the crucial plot points.

If you’re new to the drama, it might be a bit tough to swallow, but if you’re still watching by Season Two, you’ll know what to expect and will be more accepting of what is to come.