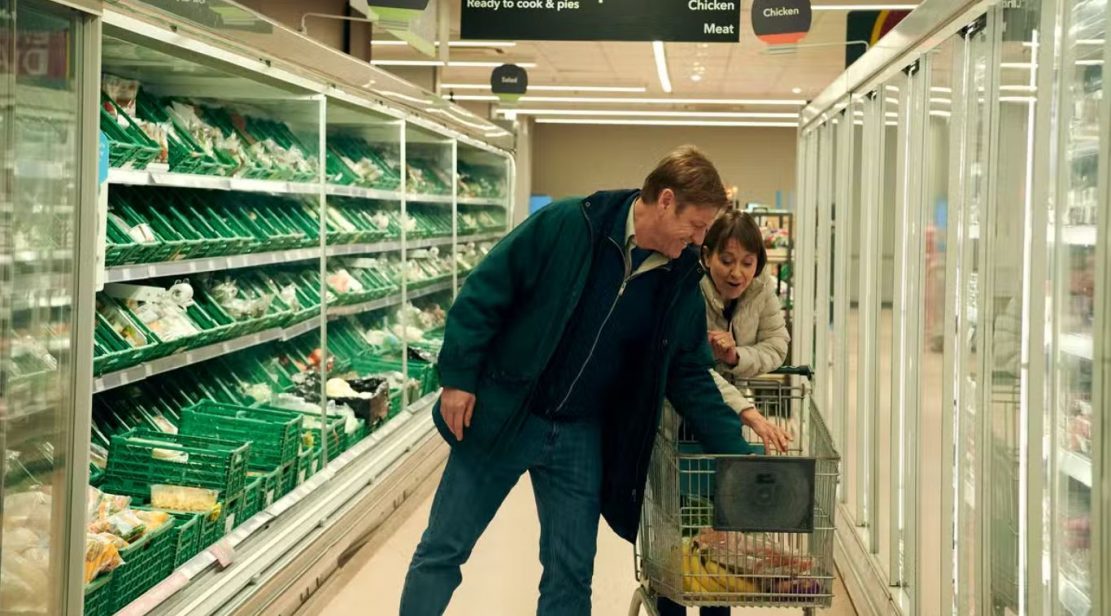 Ian (Sean Bean) and Emma (Nicola Walker) have been married for 27 years. Married life is a mixture of banalities and in-jokes, apparently.

Ian has recently been made redundant and is struggling to fill his unwanted spare time. Meanwhile, Emma’s legal career is on the up, as her younger boss – a horrendously selfish bully Jamie (Henry Lloyd-Hughes) – keeps increasing her responsibility.

How will the couple address their own issues – while dealing with those of everyone around them too?

Stefan Golaszewski’s latest drama could just as usefully been called Marmite, as you’ll either love it or you’ll hate it. It’ll either be an insightful depiction of a mature marriage or an experience as tedious as looking in the mirror or watching paint dry.

The beauty, here, is in the confidence of the lead performances – Sean Bean and Nicola Walker aren’t afraid just to be natural – as individuals and as a couple. He’s the formerly strong one, suppressed by his recent redundancy and failure to find a new job – she’s now the bread-winner, trying to progress in her career, without making her husband feel, well, redundant. Then there’s the portrayal of a marriage that’s well past its silver anniversary.

Those who love it will admire Golaszewski’s courage just to turn on the camera and leave it pointing at them as they brush their teeth, walking in and out of frame, or argue over what chicken to buy in the supermarket – just like in a real relationship. Those who hate it will wonder why on earth they need to watch another couple brushing their teeth, choosing a chicken or talking about ketchup, when these are things they do on a daily basis themselves – and there are far more interesting things we could be watching them doing.

There’s so much of the mundane, everyday elements of life that for some viewers, it’ll feel totally real, but for others, it’ll feel like a total waste of time, prising their eyes and ears open, in the vein hope that they’ll discuss something interesting. They do – occasionally – as we do in our own lives – but they don’t seem to do anything about it – as we, in our own lives, inevitably have to.

And this is where the artifice really breaks down.

When things turn up in real life, we have to deal with them.

It’s not all dull though – he sets up some interesting avenues – but then fails to go down them. There’s plenty of real drama – but it’s all happening on the sidelines and never properly explored – and mostly involving supporting characters, rather than the couple themselves.

He touches on some meaningful issues – from adoption and infant death to coercive behaviour and workplace bullying – there’s even a bit of inadvertent stalking and some jealously thrown in – while it’s perfectly normal for a long-term couple to joke about their underwear, talk about their children’s problems, ask about each other’s days or disagree about the weekly food shop – few people’s lives are taking place on the periphery of so much drama – yet it never comes up for conversation.

Some will say you don’t have to hear a couple discuss how difficult it is to grieve for a child, because it’s so obviously painful. Why then, having seen them visiting a grave, do we have to spend a couple of minutes watching them sit on a bench, in silence – and in tears.

Does he want the audience to do the work themselves – to work out that it’s difficult, still to be grieving for a child who died many years earlier – or does he want to spoon-feed us, to show us just how hard it is, by inviting us to watch them crying. These actors are perfectly good enough that the look on their faces as they stand by the grave is enough – any other director would move on and we’d get through the whole four episodes in a single hour and not feel we missed anything.

But if we wants us to watch the couple crying, he could at least have the courtesy to tell us a bit more about the child – the death – how it’s still affecting them decades later. Apart from this one scene, it’s hardly mentioned again. And so it goes on – there’s an interesting potential storyline about a pickle Ian gets himself in when he joins a gym to pass the time, but it simply doesn’t go anywhere.

It’s arch – it’s not what real life is like – it’s how real life would be if you took out the drama and left in the everyday banalities. Most directors take the opposite route and show us a bit of the drama and a bit less of the tooth brushing or checking whether the milk has gone off.

It’s not that he’s showing us the moments that we don’t normally get to see on screen – as if we need to, living them ourselves everyday anyway – it’s him wilfully choosing to show the boring moments rather than following any of the more interesting events he hints at. He’s doing the easy bit and shirking the hard work.

There’s another potentially interesting contrast between a couple who’ve been together for 27 years and their daughter discussing the notion of marrying an inappropriate boyfriend – but while we see her being unhappy, it’s very on-the-nose and we don’t hear very much interesting discussion. “Things weren’t always easy before we got together,” or some such parental advice, perhaps?

In fact, she’s not saved from bad relationship by her caring parents, but a creepy stalker, who practically pummels her into submission – unless this is meant to show a pattern of a woman leaving one controlling boyfriend to settle down with another?

It’s also troubling that the relationship at the heart of this drama isn’t always entirely convincing – yes couples sometimes argue and sometimes stare lovingly into each other’s eyes – but there’s consistency to it – there’s a bit of ebb and flow – not a jerking to and fro.

And Emma’s swearing doesn’t sit well at all with Ian’s passivity. And it seems tremendously unprofessional for her to be effing and blinding in front of work experience kids – she’s not a character that her lawyer in The Split would have any time for at all. There’s a scene where their daughter literally ignores Ian after he’s just helped her, as she stares at her phone – elements of truth, perhaps – but it doesn’t go anywhere.

Emma’s boss Jamie (Henry Lloyd-Hughes) is perhaps the most interesting character on screen, although we rarely get more than skin deep to understand why he’s so unlikeable. Sean Bean is the only character on screen that anyone would ever want to spend any time with at all. It’s his isolation that brings this show to life. He plays a little more introverted version of his bedraggled character in the recent prison drama Time. Marriage works best when Ian is on his own.

Reading other reviews makes you feel that other people have seen a different show – or at least seen this show differently.

But it’s not clever simply to show us how mundane marriages can be – we know that already – as do other directors, who chose not to show us what we already know, but something interesting, different or enlightening. And other directors might not have chosen to tease us with the prospect that it might go somewhere only to – wilfully or otherwise – leave that strand behind and tease something else.

I’d be interested to see what people who commented enthusiastically after episodes 1 or 2 might feel having stuck with it to find out how storylines revolving around trauma, bereavement, infidelity and the like might unravel – only to find out that – spoiler alert – they don’t.

Surely the whole point of persuading us to sit down for four hours to watch this is not to satisfy us that life is a mixture of mundanity, drama and humour – or indeed goes on – we know that already from our own lives. But in our lives, we either have to deal with our issues – or help those around us deal with theirs. We don’t just go around, cap in hand, collecting curiosities that we never intend to address.