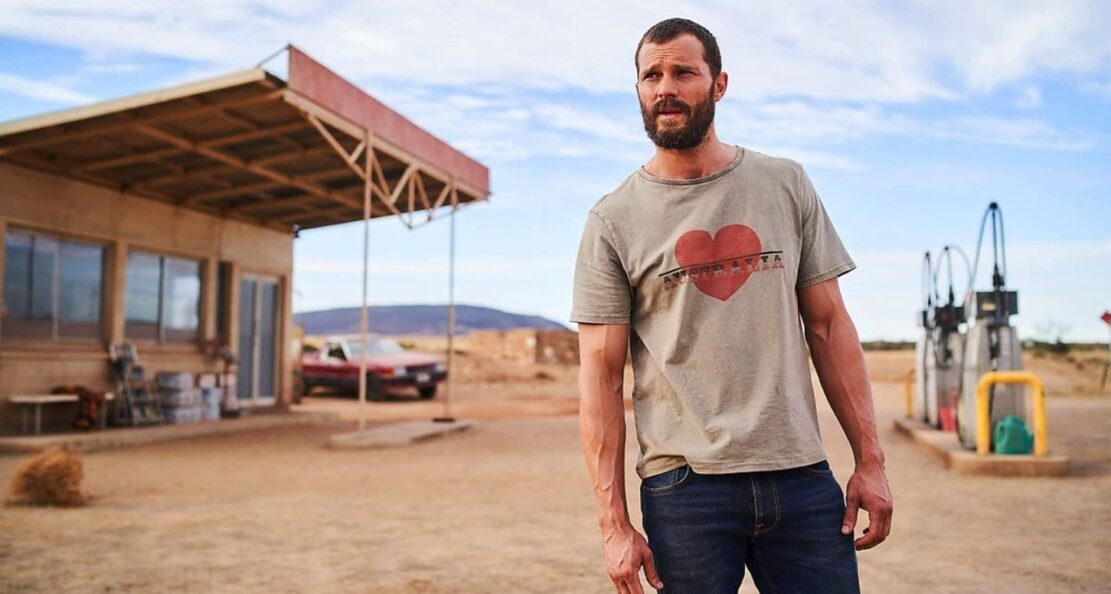 Our protagonist (Jamie Dornan) wakes up in hospital after a crash in the middle of the Australian outback. He can’t remember who he is or how he got there.

A probationary police officer, Helen Chambers (Danielle Macdonald), is the first to interview him in hospital, but no-one seems to be that interested until the no nonsense Detective Inspector Lachlan Rogers (Damon Merriman) comes up from the nearest city to take a look. In this part of the world, the nearest city is a long way away.

The man with no name has few clues to go on, but a note in his jeans pocket, a hidden cuddly toy, a mysterious phone-call, an explosion and a meeting with someone who might have as many secrets as him all muddy the waters as he seeks clarity.

Will he manage to remember who he is? And if he does, will he like what he remembers?

There’s so much going on in the BBC’s outback-set thriller that it’s almost amazing that they managed to squeeze it all into just 6 hours of TV.

The first four episodes are as compelling as they are confusing, with the twists and turns coming thick and fast, as one revelation leads to the next. And cliff-hangers make for gripping binge-viewing.

There are elements that feel a little arch – journeys that we’re told take hours are completed by other characters apparently in minutes, when the plot so requires and characters who don’t seem to feel the consequences of the violence that befalls them.

Some of the supporting characters are similarly arch – off-the-peg eccentrics and pantomime villains – archetypes who help the plot nudge along without too much explanation.

Episode 5 takes an unexpected flight of fancy; on the one hand, it’s an original alternative to the flashback as a tool to fill in the gaps in his memory, but it also feels a little laboured, clunky and convenient – and doesn’t necessarily fit with the facts.

The denouement manages to claw things back, as it continues to take half of the characters well out of their comfort zone and leave the others well within theirs.

Some of the answers that emerge understandably leave a rather sour taste in the mouth and darken the mood of an otherwise upbeat romp through a criminal underworld that brings together individuals from the outback and the big city – and places as far and wide as America, Greece and Northern Ireland – and weaves them together in an increasingly messy – deliciously nonsensical – web.

At times, The Tourist feels a little like Guy Pearce’s Leonard from Memento has been dropped into the Fargo TV series.

The desolation of the sandy outback mirrors the emptiness of his memory, with each person he meets adding a little more colour to the picture.

With an undercurrent of sarcasm and dark humour, Jamie Dornan’s in his element as the man with no name, whose actions seem to be one step ahead of his memory and who’s often – not surprisingly in the circumstances – disappointed rather than relieved by the return of each memory. It’s an odd series when you like the protagonist less and less, the more you learn about him – yet its to Dornan’s credit that you’re still rooting for him at the end. Although that’s partly because whatever he might have done in the past, others have done even worse, and his amnesia has given him a chance of a fresh start.

A little uneven and contrived at times, as the ballooning plot leaves you a little deflated, The Tourist can be forgiven many of its flaws, because it’s such a hugely enjoyable enigma – you might not be blown away by the picture at the end, but it’s still fun to do the puzzle.