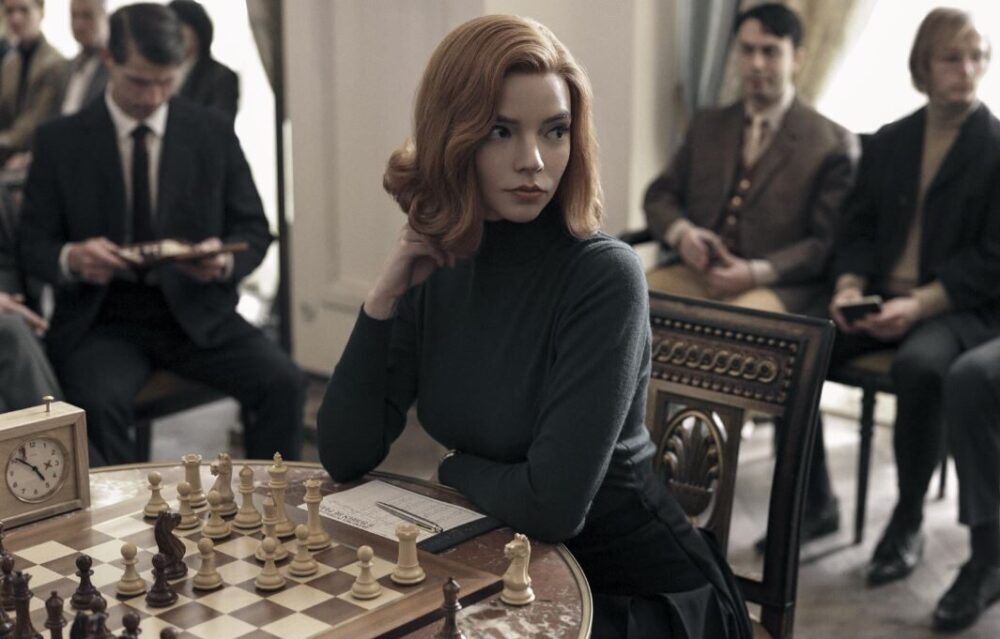 Beth Harman (Isla Johnston) ends up in an orphanage at the age of 9, when her mother dies in a car crash. On a series of errands to the basement, she befriends a kindly janitor, Mr Shaibel (Bill Camp), who spends most of his time sitting in front of a chess board.

Beth is a natural and with the support of Mr Shaibel, by the time she’s in her early teens (Anya Taylor-Joy), she’s being entered into local competitions, embarrassing some of the area’s best chess players.

When she’s finally given a home, her adopted mother Alma (Marielle Heller) sees the financial advantage of encouraging her success, as prize money starts rolling in, enabling the pair to travel the country and stay in posh hotels, as Beth leaves some of the country’s best players in her wake.

But the real prize in chess is beating the Soviets – on home soil – so Beth is going to have to battle her demons and overcome all the competition to make it to Moscow – and return home with her head held high.

Chess hasn’t been this sexy since Steve McQueen and Faye Dunaway went head to head in The Thomas Crown Affair, back in 1968.

Indeed, with this series set in the late 1960s, you’d almost imagine that if chess players weren’t such studious intellectuals – well, most chess players – these characters would probably be popping out to see the film.

Beth is less of an intellectual – while her contemporaries spend every spare moment reading up on every game and gambit in history, it all seems to come to her instinctively; with a bit of help from the tranquilisers she’s been taking on the sly since they were forced down her at the orphanage, she watches moves play out on an imagined chess set on the ceiling.

This is one of a number of directorial flourishes that help to make one of the most sedentary and least physical games seem like the most exciting spectator sport imaginable – certainly during these lockdown days when there’s less sport to watch anyway.

Anya Taylor-Joy is mesmerising in the central role and she’s well served by a supporting cast of enthusiastic chess players and devoted cheerleaders – many of them had started out as hapless opponents with ambitions of their own that crumbled as they sat across the table from her.

Beth is a flawed character, struggling with addiction – she’s addicted to the tablets she’s been taking since the orphanage, her adopted mother’s own penchant for cigarettes and alcohol have rubbed off on her – and of course, she’s addicted to chess, to the extent that it makes personal relationships difficult, or even pointless.

The costumes and the production design give a sense of authenticity that add to the sumptuous experience of this seven-part Netflix mini-series, but its main – possibly only – weakness is its narrative arc. It sets up so much potential for dramatic conflict – not least whether her addictions will hamper her rise through the ranks or prevent her forging supportive or loving relationships. But they don’t. In seven hours, she has just one embarrassing moment, followed by the briefest of breakdowns, before she’s back up on her feet, clean-as-a-whistle, wiping the floor with Russians like she didn’t have a care in the world.

It’s more of a nostalgic chess-player’s fantasy than a true piece of drama – with a little unrequited love thrown in, it’s a guilty pleasure for chess nerds and TV nuts alike. But the message it would send to people struggling with addiction is probably not one their friends and family would want them to see.