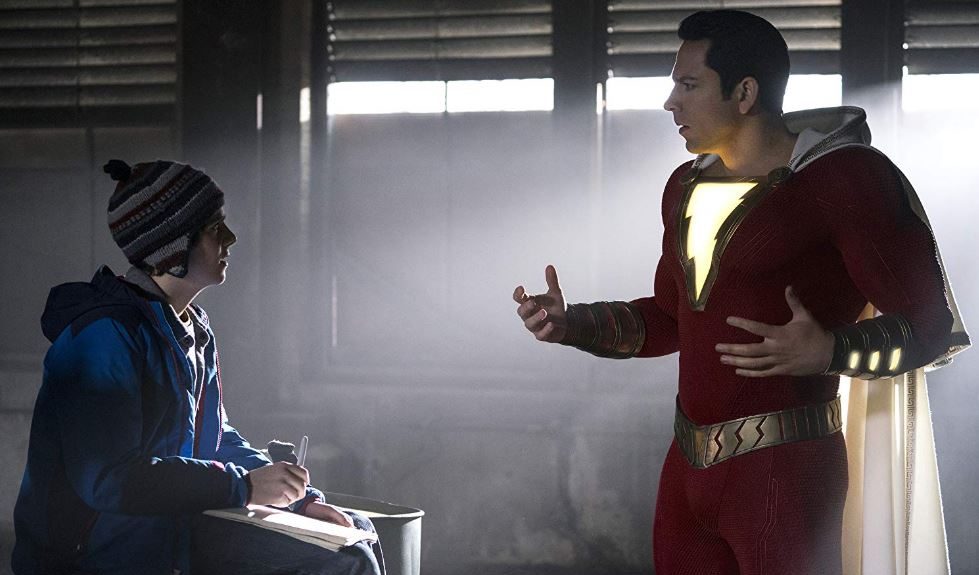 Troubled teenager Billy Batson (Asher Angel) has been running away from care ever since he became separated from his mother at a funfair as a young boy.

An exasperated social worker assigns him a new foster family where she hopes he’ll finally be able to settle down.

The eccentric bunch of kids already living there include the superhero geek Freddy Freeman (Jack Dylan Grazer), whose overtures of friendship are continuously spurned by a newcomer who prefers to keep himself to himself.

But when an heroic turn leads to an unexpected encounter that bestows superpowers on an unsuspecting Billy, Freddy is the only person he can turn to for help.

Simply uttering the name Shazam turns fourteen year old Billy into an adult superhero (Zachary Levi) with goodness knows what powers. But as Freddy helps him come to terms with his newfound situation, darker forces are brewing; a mad scientist, Dr Thaddeus Sivana (Mark Strong), who embodies the seven deadly sins, is out to find Shazam and steal his powers for himself – and he’s prepared to do whatever it takes to whoever gets in his way to achieve his dastardly goal.

The punctuated Shazam is a lesser-known DC superhero who – unlike his more famous stable-mates from the Superman and Batman franchises – lives in a real city, Pittsburgh in Pennsylvania. He’s also somewhat lighter in tone than any DC outing since Christopher Reeve’s early Superman films.

But other than that, he fits right into the formula – an unassuming loner with a tragic back-story and a pure heart has inexplicable powers foisted upon him and has to rise to the occasion to save the world from a super-charged megalomaniac, with a similarly tragic back-story, who – but for a simple twist of fate – could have found himself in the other shoes.

The notion of a young boy turning into an adult superhero does put a different spin on the genre too, as you don’t have the problems with suspension of disbelief, having to pretend that Clark Kent is unrecognisable without his glasses on. But it does mean that the film often lacks purposes when the supposed protagonist, Billy Batson is on screen, and comes to life only when his alter-ego, Zachary Levi’s half-length caped crusader appears – after a little too long a wait.

But oh, how it comes to life. Levi and his geeky side-kick bounce off of one another briskly as they have genuine fun exploring the new super powers and trying to come up with a name that’s as cool as the reputation he’s starting to build. It also makes a change to see a superhero with a child’s sensibilities – an immature outlook on the world around him and a lack of the sense of responsibility and altruism that you’d expect from the genre. But there’s rather too much of a shift in his temperament to make it truly believable that the crime-fighting vigilante is the same person at heart as the downtrodden teenager with a mission of his own.

Mark Strong – as the biggest name on display – is suitably dour as a hard-done-by villain whose own powers seem to be unbeatable enough for him not to have to bother trying to steal those of our hero.

It’s unusual for a major studio to deliver a marquee movie with a little-known cast, so it could be a sign of trying to keep costs down or not having faith in their own material – but it pays off, for now.

It’s rare for punctuation not to herald a turkey, but Shazam! works as a delightful, family friendly romp through a superhero origins story – it’s a highly likeable journey of discovery. But it’s not clear that as a central figure in his own right, our protagonist has a longer-term role as a self-sufficient hero who can carry a franchise, despite the now-compulsory mid-end-credit sequence, which peeks ahead to a sequel that this brisk opener is bound to trigger.