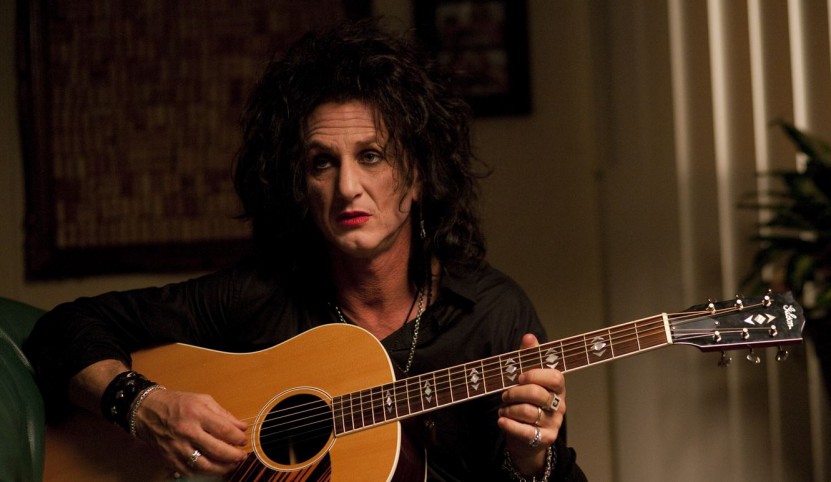 Cheyenne (Sean Penn) was a rock star, but when two fans killed themselves after listening to his depressing music, he quit the business and retired to a mansion in Ireland with his long-suffering and astonishingly accepting wife (Frances McDormand), living off his royalties.

A softly spoken, fifty year old Goth – jet black hair exploding out of his head like a scare-crow’s with make-up that would have made Princess Diana look plain – Cheyenne fills his life with the occasional trip to the grave of the boys who killed themselves and visits to the local shopping centre, always pulling behind him the kind of wheeled shopping bag, more commonly seen propping up the elderly.

But when he hears that his father is close to death, he heads home to the US, where he discovers that his father was a Holocaust survivor who’d spent his final years trying to trace a concentration camp guard (Heinz Lieven) who had humiliated him.

Cheyenne sets off on his own cross-country road-trip, determined to find the Nazi who’d made his father’s life hell, get closure for his father – and give his own life new meaning.

Sean Penn is not frightened of changing his appearance or voice for a role and here, he does both in spades. It’s unclear, at first, the tone he is setting. The middle-aged, soft-spoken goth could be a comic grotesque from Saturday Night Live or a downbeat miserablist creation from Peter Mullen or Paddy Considine. Are we laughing at him or with him?

In fact, Penn – and director Sorrentino – pitch it closer to the comic, but at its heart, the film is almost soul-destroyingly sad, from the way he lives his life to the people he surrounds himself with.

Having set this up as the archetypal bitter-sweet character study of an ageing, retired musician whose present, in Ireland, is haunted by his past, it jars slightly to see it dogleg unpredictably into an American road-movie about a Nazi-hunter. It makes a change for a film to catch you by surprise and take you somewhere you weren’t expecting, but it feels just a little too arch a tool to use to dress up a tale of rediscovery and redemption.

This Must Be The Place – named after the song by Talking Heads, whose frontman David Byrne appears in the film as himself, and a friend of Cheyenne – is warm and wears its heart on its sleeve. It’s clear what it’s trying to do, but less clear whether it quite succeeds.

The film is clear about Cheyenne’s journey being an attempt to seek redemption – but Sorrentino’s answer doesn’t quite match his working; the film’s conclusion doesn’t necessarily follow from the journey.

But it’s a beautiful journey – the photography of the American countryside is astonishing – and the confrontation that the second part of the story builds up to is moving and effective.