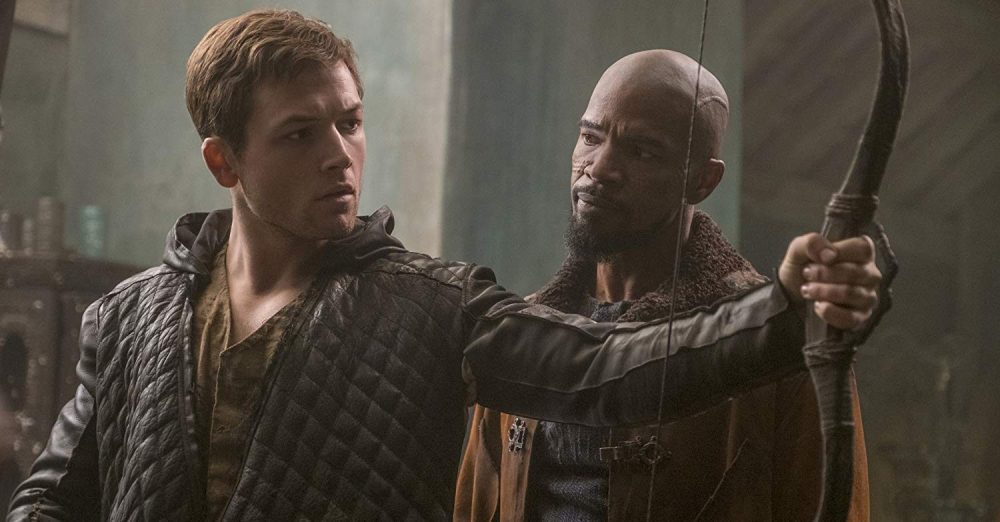 After years away, Robin of Loxley (Taron Egerton) returns from fighting in the Crusades to discover his property and lands have been confiscated by the Sheriff of Nottingham ( Ben Mendelsohn) and the love of his life Maid Marian (Eve Hewson) has married Will Scarlet (Jamie Dornan).

In her defence, she did believe he had been dead for two years.

Loxley teams up with a Moorish commander aka Little John (Jamie Foxx) to mount an audacious revolt against the English Crown.

If you are expecting a return to a fun loving romp as in Robin Hood: Prince of Thieves or Men in Tights then you are in for a major disappointment.

This latest retelling of the Robin Hood legend takes itself far too seriously and is devoid of any humour. In fact it looks like a cross between Assassin’s Creed and the TV series Arrow, or as a friend described it Lock, Stock and Two Smoking Longbows

It is also a stylistic mess. The Crusade battle scenes in Arabia at the beginning of the film looked straight out of The Hurt Locker but with bow and arrows.

Meanwhile a ball sequence in Nottingham was reminiscent of The Fifth Element as everyone seemed to be wearing futuristic garb which made me question what era this was set in.

And Mendelsohn’s Sheriff of Nottingham appeared as if he had come from a Nazi war film with his stark leather uniform. It was all very odd and confusing.

However Egerton didn’t disappoint with his charismatic and energetic performance.

Ironically he spent two months training to use a longbow and when he arrived on set he wasn’t allow to fire a single arrow. His bow action looked very authentic. Meanwhile Foxx always delivers and Hewson, Bono’s daughter, made a passable Maid Marian, as Cate Blanchett she is not. Dornan however gave a very flat performance as Will Scarlet who is a political activist here.

It was Mendelsohn who virtually stole the film (not that it was very hard mind you) though, as the evil and ruthless Sheriff. Though why they had to make him sympathetic and dare I say likeable by giving him a backstory, that involved him being sexually abused by clergy as a young boy, is beyond me.

There is nothing wrong in reinvisioning a classic tale, but here it seemed as if they were trying too hard and really didn’t provide any ground breaking fresh insight.

My advice would be to seek out any of the previous incarnations, including the Russell Crowe movie.