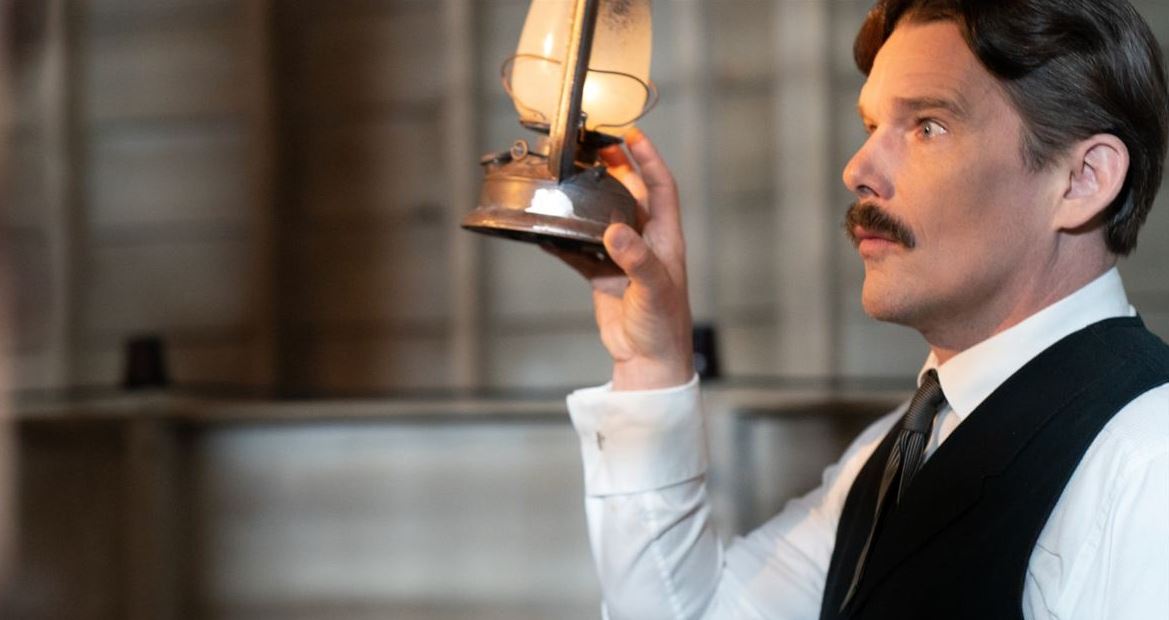 In 1880s New York, a Serbian electrical engineer, Nikola Tesla (Ethan Hawke) is working for the American electricity pioneer Thomas Edison (Kyle MacLachlan), but he feels under-appreciated, and when Edison won’t pay him what he wants, he leaves to seek funding to develop his own projects.

During the years that follow, he borrows more and more money to help him build increasingly ambitious inventions.

Some work well and attract more investment – others raise doubts about his reliability and trustworthiness.

Some lead to fruitful business relationships – such as a partnership with Edison’s main rival in what became known as “the current war,” George Westinghouse (Jim Gaffigan).

He finds himself, for a while, involved in a relationship with the Anne Morgan (Eve Hewson) – the narrator of this story and the daughter of one of his more dubious investors, the wealthy banker JP Morgan (Donnie Keshawarz).

Through a mixture of real and somewhat imagined events, Anne gives more of an abstract picture than a biography of the man whose reputation has been adopted by one of the technology pioneers of our own era, Elon Musk, to adorn his electric cars.

It’s difficult to know what to make of this film – especially coming just a year after The Current War, which looked more specifically at the rivalry between the same three pioneers of electricity over whose system would become used widely.

Oddly, even though that film was more about the battle for supremacy between Edison and Westinghouse, with Tesla being more of a background character, it feels like you learned more about Tesla in that film than in his own.

While the structure of this narrative makes it stand out as a piece of film-making – with a minor character acting as an unreliable narrator, anachronistically consulting a modern-day laptop to check her facts – it muddies the waters. So hang on, did this happen or not? Was this actually how it was? Did Nikola Tesla really break out into a rendition of the Tears For Fears classic “Everybody Wants To Rule The World” in a moment of self-importance when a request for more funding was rejected. Yes, there are somewhat incongruous moments of fantasy too – some of which are artistically effective, but others will leave you as cold as if you’d had ice-cream smeared in your face.

Ethan Hawke – like Nicholas Hoult in the earlier film – plays Tesla as a rather serious fellow with almost no sense of humour and almost never without a frown on his face or despair in his gravelly voice. As a supporting character, this isn’t a problem, but in the central role, you feel you need rather more charisma to make the audience care.

And while the earlier film concentrated on a particular moment – the war over whether AC or DC current would eventually be adopted globally – this film lacks focus, touching on a whole range of periods in his life and we seem to learn more about his dreams and what didn’t work than the legacy we should remember him by. But perhaps that’s the point of a biopic – to tell us what we don’t know about the subject?

In that sense, this is a more bold and engaging piece of film-making, but leaving you feeling you know a little less about him than you did after seeing the earlier film, narratively as unsatisfying.

As with The Current War – and indeed like Tesla’s own motor – this is a film about electricity that lacks the spark it needs to engage the audience that might not have been able to watch it, had it not been for his own hard work.