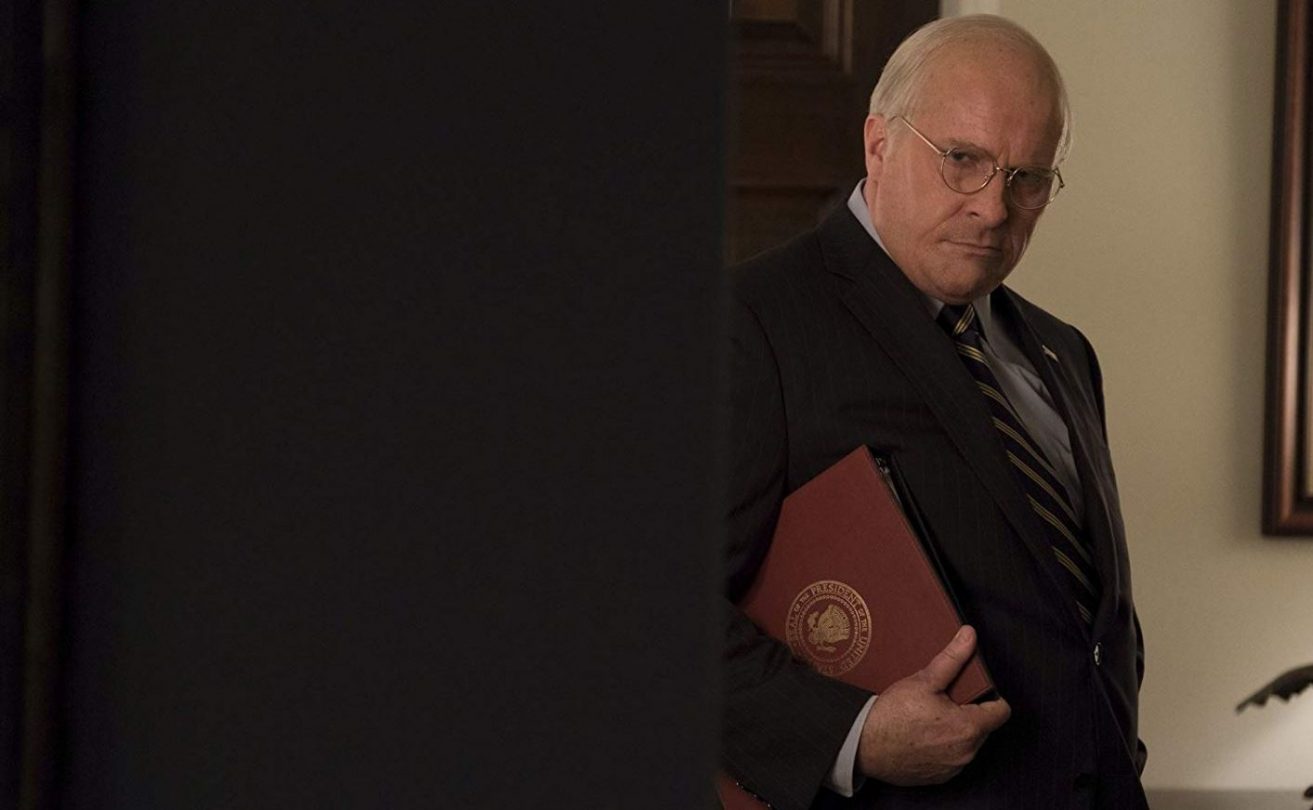 By the early 1960s, the young Dick Cheney (Christian Bale) has 2 drink-driving convictions, a dead-end job and an ambitious wife, Lynne (Amy Adams).

When she points out to him that she doesn’t want to be hanging around with loser, he pulls himself together and gets himself onto a White House internship programme where he begins by working for an influential young high-flier, Donald Rumsfeld (Steve Carell).

In the years that follow, the pair rise up the ranks until Cheney becomes President Ford’s Chief of Staff, with Rumsfeld serving as Secretary of Defence – or Defense as they’d spell it over there.

An election defeat for President Ford pushes Cheney into the private sector, where he eventually decides to stay, fearful that returning to public office would open up his family to too much public scrutiny.

But a call from Governor George W Bush (Sam Rockwell), asking him to be his Presidential running mate, proved to be too much for him to resist; the press are less interested in the Vice President’s personal life after all.

Lynne isn’t so sure that it’s the right move, since Vice President doesn’t have much power. But with the Vice President’s power in the gift of his boss, Cheney sees an opportunity – he’ll take up Bush’s offer, but only if he can pick and choose how much authority he has for himself.

During two terms in the White House, Dick Cheney becomes the most influential Vice President in American history – and two and a half terms of other presidents later, his legacy is still being felt.

Writer-director Adam McKay has come a long way since the broad, often puerile comedy of Anchorman and Talladega Nights; an ill-fitting anti-capitalist polemic over Rage Against The Machine over the end credits of The Other Guys saw him inch closer to political commentary, which followed up with his evisceration of the world of finance in The Big Short. Now, we get a full-on assault on – until now – the most controversial Republican administration since Nixon – or at least the man on whom he pins the blame.

Christian Bale clearly takes the same political view, thanking “Satan” for the inspiration, when he collected his Golden Globe for this role. His transformation is astonishing – archive footage of Dick Cheney won’t look quite right anymore, so comfortably does Bale sink into the role, from the portly, bald physical appearance to the gravelly voice and deliberate mannerisms.

It’s certainly engaging  as a darkly comic drama – the dark comedy being potentially all-the-more frightening, if you occupy a similar area of the political spectrum to McKay and Bale. Even those on the right of politics can enjoy the performance and behind-the-scenes shenanigans, with just a little eye-rolling thrown in on occasion. But – despite this dark humour, it feels a little disingenuous for the film to have contested the Golden Globes in the comedy category.

This is one of those rare examples a director using a fractured time-line without damaging the story-telling, aided by Cheney’s differing appearance across the years. Even a strand of occasional narration serves effectively to add to McKay’s vision of just how heartless Cheney is.

McKaye also adopts a handful of knowing, narrative tricks, such as a false ending – that’s not meant to fool anyone – an eye-opening meal at Alfred Molina’s restaurant – and a return to a focus group during the end credits – that humorously acknowledges the film’s provenance, before falling into its own trap.

Liberal as McKay happily announces that he is, he doesn’t quite paint his protagonist as pure evil, leaving the tiniest chink of light, as he argues that – for most of his career, at least – ambitious as he was, he put his family first – or perhaps, he’s using this as in indication of quite how manipulative he regards Cheney to be.

It would perhaps have been a little more helpful for the audience to know how Cheney’s political ideology developed, without which we learn a lot about what he did, without really knowing what drove him, other than power – but once you have power, what you choose do to with it is key.

On the one hand, McKay delivers an incisive political satire, illustrating how true power can be wielded from the sidelines, almost with impunity – but on the other, it’s just another anti-Iraq-War polemic and a typical Hollywood pop at the right.