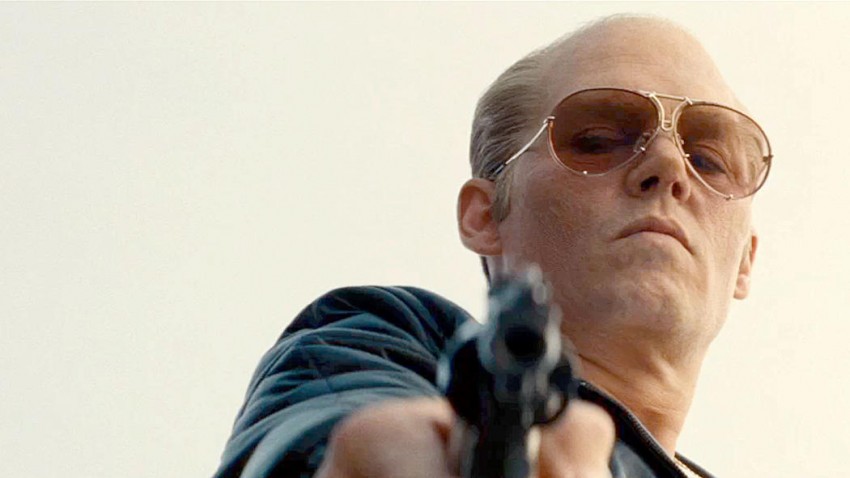 In the mid 1970s, James “Whitey” Bulger (Johnny Depp) was a small-time Irish gangster, trying to dominate the underworld of south Boston. The north of the city was out of his reach, as the Italian mafia were in charge there.

In the close-nit community of south Boston, no-one seems particularly surprised or even worried about the fact that his brother Billy (Benedict Cumberbatch) is a Massachusetts State Senator and their childhood best friend John Connolly is a rising FBI Agent.

The three continue on their separate paths, until Connolly comes up with a plan; he strikes a deal with Bulger that in exchange for information that will help him bring down the Italian mafia, he’ll turn a blind eye to what his Winter Hill Gang is up to – with only one condition – no killing.

But as the Italians are rounded up, Connolly secures promotion after promotion, but the vacuum in the north enables Bulger’s mob to grows in influence across the city, making it harder for Connolly to keep him under control.

Connolly’s continued dealings with Bulger puts pressure on his marriage and soon,  the walls start to close in on him at work too; as the state’s new attorney general Fred Wyshak (Corey Stoll) starts asking questions about why Bulger has never been brought to justice, Connolly begins to realise that he’s on borrowed time.

Told in flashback, framed by FBI interviews with arrested gang-members, a story unfolds that exposes one of the most scandalous real-life examples of the authorities colluding with the criminals they are supposed to be bringing to justice.

But this telling of the story, sympathetic to those at its heart, suggests that Connolly and his unwitting FBI accomplice were not in it for any proceeds of crime - a bit of glory was welcome, of course, but Connolly genuinely seems to think that it's worth doing whatever it takes to bring down the Italian mafia, even if that means letting the Irish mobsters off the hook.

Once you realise that despite the posters and Johnny Depp's higher profile, this film is actually about Joel Edgerton's corrupt FBI agent, it's clear that - his version of events at least would have you believe - he's just a bit of a cheeky good guy whose contemporaries don't really understand him and whose clever scheme gets a little out of hand.

This is a thoroughly different performance from Depp, who typically laces his characters with a sly irreverence; this is a necessarily one-note black performance, with only the rare chink of warmth shining through the menacing facade; it makes a change to see a gang kingpin getting his hands dirty, rather than leaving his cronies to all his dirty-work.

The plot is drawn out and linear - the FBI interviews aside - with every event leading inexorably to the next, towards an inevitable conclusion, without enough ups or downs to make us question what might happen. There are too few surprises, particularly for those who don't remember when the events depicted here unfolded on the news.

One particular problem is that almost without exception, the characters are unlikeable, making it hard for audiences to identify with anyone - Depp's James is a ruthless gangster with few - if any - redeeming quaities, Cumberbatch's Billy might not be a criminal, but he's a slimy and power-hungry politician whose role seems to lack the punch you'd expect, and even Edgerton's Connolly - the emotional heart of the film - is too driven and blinkered for us not to think he deserves what he's got coming to him. The supporting characters do little more than tick the boxes required for the story to progress.

While the performances and the period detail can't be faulted, the shocking real-life events aren't as gripping as they should be.

It's an odd kind of film, in that it's well written and directed - but the script and direction lead to a pedestrian film that is nothing like as compelling as it would have been for American TV viewers, watching the same events unfold on the news.