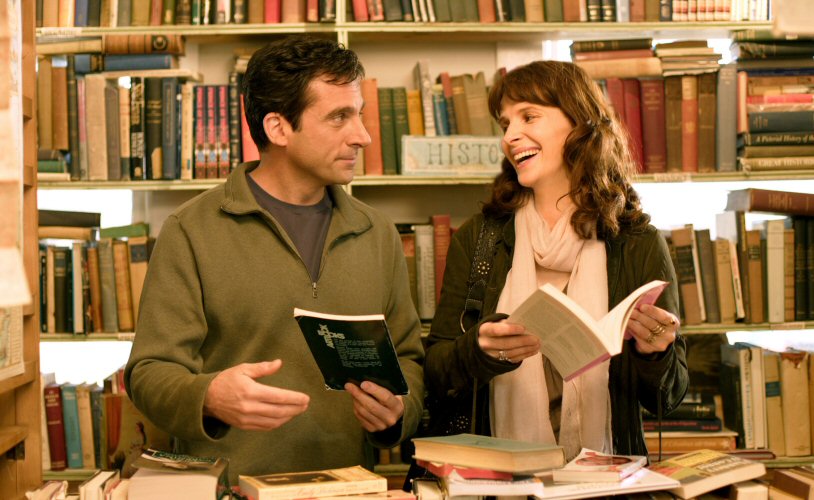 The death of Dan’s (Steve Carell) wife has left him bringing up three teenaged daughters alone. He hasn’t even had a moment to think about meeting anyone else, with all his time taken up by his daughters and his job – writing a parenting column for a local paper.
At Thanksgiving, the whole extended family head to his parents’ (Diane Wiest and John Mahoney) place near the coast. The first morning, Dan’s mother sends him out to buy the paper from the village store, by the marina. While browsing in the book section, he meets fellow customer, Marie (Juliette Binoche).
They hit it off instantly and there’s a clear mutual attraction, but she’s a bit reticent about handing over her number. After some persuasion, she agrees that there wouldn’t be any harm in continuing their conversation some time on the phone.
Later, back at the family pile, the doorbell goes and Dan’s younger brother Mitch (Dane Cook) proudly introduces his new girlfriend. Dan is horrified to turn round and see it’s Marie.
The scene is set for a weekend of suppressed love, embarrassment and the worst kind of family tension imaginable, in an unexpectedly warm, charming and grown-up romantic comedy.

There are two Steve Carell’s doing the rounds – the weird and wacky one seen in such production as Anchorman, Evan Almighty, The 40 Year old Virgin and the American Office and the quiet, underplayed downer whose previous outing was the depressive literature scholar in Little Miss Sunshine.
Dan is a reprisal of the repressed loner and Carell handles this with the skill of the best dramatic actors, without erasing his comic heritage completely.
His rather exasperated interplay with his daughters is as effective and believable as his increasingly frustrated reaction to his forbidden love.
Binoche brings grace to the role of the newcomer to the family, while Wiest and Mahoney don’t put a foot wrong with what little they have to do.
The performances can’t be faulted, the direction unfolds the story at a satisfying pace and elements of the story are as intelligent as they are warm and real – not least watching the man who writes about parenting for a living having problems relating to his own children.
But there are some tremendously frustrating scenes, which see such moments as the emetic family sing-song-scene and a handful of comic moments which fall way beneath the standard of most of the priceless dialogue; in order to wring belly laughs out of what, in a grown-up film, would have been better as quiet, knowing titters, there’s a shower scene which while funny would, in all reality, never happen like that, as the protagonists would say “let’s do this outside/later;” given that Marie is highly intelligent, she would not be anything like as provocative as she is; and please – a race-against-time finale?
The film generates a lot of good-will, even if some of it is through gritted teeth, but the final act, regrettably, degenerates somewhat into more standard Hollywood fare, which might win a mainstream audience but it will alienate the more discerning viewers it had been courting up until that point.
That said, this is unquestionably one of the warmest films you will see all year and you won’t be able to help feeling good about the world as you leave the cinema.
Maybe my fellow movie snobs and I just aren’t quite as discerning as we thought we were, or perhaps the second film from the Pieces of April auteur is just a little more cleverly manipulative than it appears to be on the surface.