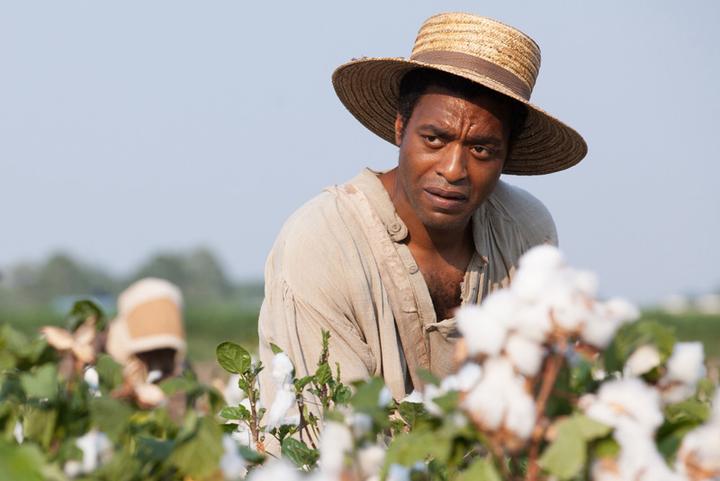 In upstate New York in 1841, Solomon Northup (Chiwetel Ejiofor) is a talented and successful violinist. He’s black, but he’s a free man.

When his wife and children are away for the weekend, he’s tricked into taking up a lucrative job offer and while he’s away from his comfort zone, he’s kidnapped by slave traders and sent to the south.

Sold at a market to a benevolent plantation owner, Ford (Benedict Cumberbatch), things could have been worse, but when Solomon has a run-in with plantation manager Tibeats (Paul Dano), Ford has no choice but to sell him to the only master who’ll take him, the brutal Epps (Michael Fassbender), whose bite is every bit as bad as his bark.

Solomon’s life descends into day after day, week after week, month after month, year after year of punishing work schedules, blood-letting lashings, dehumanising humiliation, finding what solace he can in the fact that the female slaves seem to get an even worse deal than he does.

As time passes, he never gives up home that he might one day find a way to return to his family life as a free man.

It’s taken a British director and British and Irish actors to bring the brutality of America’s slave trade to the big screen in a visceral fashion, that will leave you shaking.

Former artist Steve McQueen, whose previous films Hunger and Shame have made him a figure to be reckoned with in the industry, has again put his unique vision on screen, with thoroughly appropriate production design and costumes and a peculiar but effective need to hold some shots just a little too long.

It’s that lingering on the ordinary that helps to evoke the horror of the thoroughly shocking and far from ordinary treatment inflicted on the slaves, in one of the most embarrassing episodes in American history; even having a president with African blood in him has not enabled the country overcome its guilt – or its suspicions – completely.

It’s a brave portrayal – from director and actors alike – but there’s little sense of how this one story fits into the bigger picture. In fact, one of the most disturbing elements of the film – which is perhaps more profound than uncomfortable – is that Solomon is not calling for an end to slavery, but for himself – a free man – to be released; he’s not fighting for the freedom of all black people – those uneducated southerners, born into slavery, deserved what they got – he was better than them. It’s perhaps that kind of attitude that allowed the trade to continue for so long. The film seems to skip over this sense of supercilious selfishness and portrays Solomon – correctly – as a victim. But he doesn’t come out of the film as a particularly honourable one.

There are a couple of nods to something else that might have prolonged slavery somewhat – Benedict Cumberbatch’s Ford is sympathetic and treated his slaves relatively well, while another local landowner was married to a black women; such cases fought against the urgency to end the trade.

This film is much more interested in showing us the ruthless nature of the slave masters and the consequences of the gratuitous incessant torture, than it is developing a coherent narrative and digging into the characters, and we get to know little about most of the other slaves he spends so long with.

Dramatically, another issue is that apart from a peculiar and not entirely convincing moment of child carrying and the use of talcum powder in Ejiofor’s hair in the final scene, there’s no real sense of time passing; it could almost have been 12 Days a Slave. This makes his perseverance less praiseworthy. And there are perhaps only two or three key moments explored during his time in captivity, which clearly wouldn’t have filled more than a decade. And while you might argue that showing more beatings or more working would have made the film too long and boring, repetitiveness is not something McQueen is scared of, creatively, if it makes the right point. Having said that, in this case, he appears to choose simplicity for effect.

This is an important film about an important subject, but history has – largely – dealt with this now, in the western world at least, which removes a degree of emotion, urgency and anger from the film-going experience. It’s certainly difficult to watch and you do come out relieved that it no longer happens – legally – in societies we understand.

Solomon Northup’s story is powerful and heart-breaking – but while it purports to be a comment on history, it’s little more than a painfully raw snapshot of a terrible time that has scarred the US.