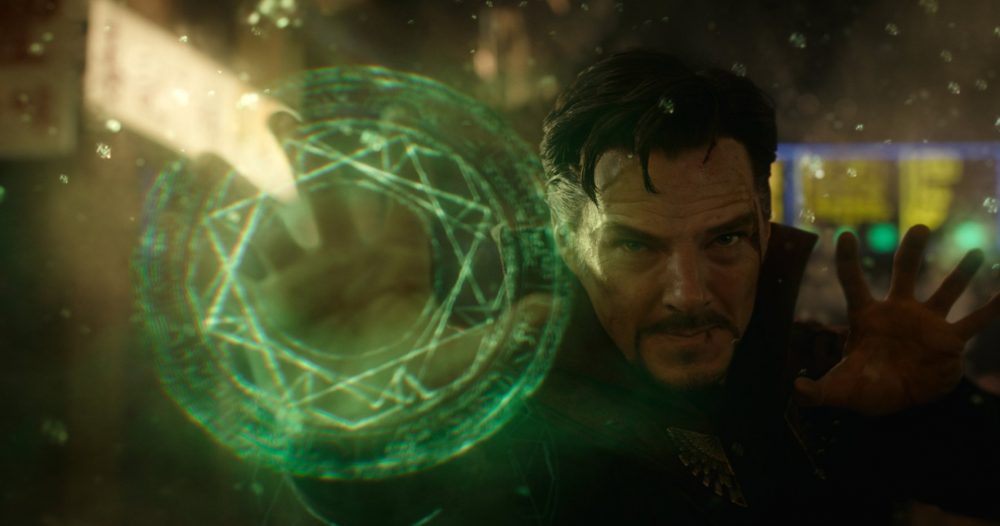 Doctor Stephen Strange (Benedict Cumberbatch) is the world’s greatest neurosurgeon. Naturally. And he’s every bit as arrogant – yet charming – as you might expect for someone who’s so highly respected.

But when an accident leaves him without the full use of his hands, he has to give up surgery and he refuses to accept that his status and glittering lifestyle are gone forever.

After finding out that someone else with similar injuries miraculously got better, Doctor Strange heads off to find a spiritual cult in Nepal, where the Ancient One (Tilda Swinton) trains her followers to do do amazing things with their minds, like healing paralysis, have out-of-body experiences and create weapons out of neon lights that spring from your fingers. Or something.

When Doctor Strange drops his cynicism and takes the teachings on board, the Ancient One realises that he could be powerful enough to help her save the planet from a group of her former students who’ve gone to the dark side, led by Kaecilius (Mads Mikkelsen).

A cantankerous but charismatic genius doctor, with a chronic physical disability – American but played by a British actor – no, not Hugh Laurie in House, but Benedict Cumberbatch as the latest Marvel comic character to hit the big screen.

A group of spiritual warriors learning to harness a mysterious force to protect their world from a handful of evil former associates who’ve gone to the dark side – no, not Star Wars, but the latest in Marvel’s magical movie world.

An American billionaire, searching for himself, heading to the Himalayas to heal his mind and body so that he can return to his home city to protect it from evil – no, not DC’s Batman Begins, but Marvel’s Doctor Strange.

So, let’s put aside that Doctor Strange could variously be described as House-meets-Star-Wars or Marvel’s version of The Dark Knight.

It has a built-in audience who won’t care about similarities to other films or franchises – and will delight in seeing their favourite comic-book characters writ large in gloriously colourful 3D, with sparks flying into the audience as time-bending necklaces, energy blasts and levitating cloaks assist the protagonists in their conflicted fight against evil. There are elements of the story-telling that stray from the source material – the Ancient One being a white woman rather than an white-bearded Himalayan man – which some argue is ethnic cleansing while others suggest is female empowerment.

Like any super-hero-type tale, the line between good-and-evil isn’t always clear-cut and many of the characters are forced to reassess where they sit on the continuum. But while many other super-heroes are trying to improve their real world environment as we know it, or tackle a particular villain, this team is just trying to save the whole world from powers so dark we can’t really comprehend what is at stake and much of the action takes place in a mirrored world where city landscapes fold in on themselves Inception-style, with oblivious regular people going on about their business as if the future of their planet wasn’t even at stake.

For anyone not familiar with Doctor Strange, this mind-bending super-hero spectacular will be somewhat perplexing – who’s doing what to who, how and why? The characters, the dimensions, the powers, the teleportation, the weapons, the mythology – it could all leave you at a loss.

There’s a love interest – or at least an ex-love interest – in the shape of Rachel McAdams’ fellow surgeon – and a range of other characters whose allegiances ebb and flow with the plot, including Chiwetel Ejiofor and Benedict Wong. There are moments of humour but in truth, for anyone other than the target audience, it’s little more than a visually arresting, doom-laden tale of mystics fighting for the very survival of the planet and with a somewhat selfish protagonist, with few ties to the world we know, it’s hard to feel emotionally involved.

And as fans of the Marvel Cinematic Universe would expect, there’s a cameo by Stan Lee to look out for and you have to sit through the lengthy titles for nods to upcoming films – two of them, one towards the beginning of the credits and the other right at the end.