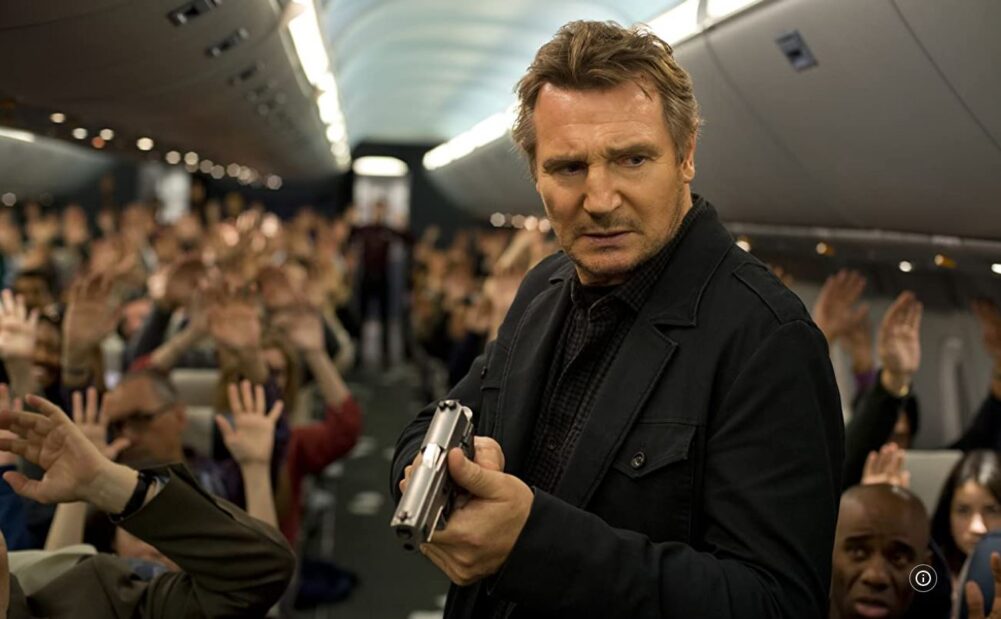 Bill Marks (Liam Neeson) is feeling a bit sorry for himself. At home, a grieving father with an alcohol problem and at work, an air marshal who doesn’t like flying.

On a British Aqualantic flight from New York to London, he receives a text – on the secure air marshal network – threatening to kill someone on the plane unless $150m is placed into a Swiss bank account.

At first, he hopes it’s a hoax, but as the messages continue, he starts to take the threat more seriously. Trying to decide who he can trust and who he can’t, Bill tries to monitor the passengers and crew to see whether any of them could be making the threats.

But when the bank account number is traced to him, the authorities accuse him of trying to hijack the plane and refuse to talk to him – or in their words, ‘negotiate.’ Soon, the passengers, too, suspect that he is trying to bring the plane down, rather than foil someone else’s dastardly plot.

Without support from the ground or the cockpit, and with passengers conspiring against him, Bill is determined to unmask the terrorist, save the lives of everyone else on board and bring the plane down safely.

For a film called Non-Stop, it takes a while even to start – giving us far too much of the alcoholic loner and expositional introductions to those who’ll become the key suspects before the flight even leaves the ground, but it’s true that once the plane takes off, the action is, pretty much, as the title suggests.

We’re very much with Neeson’s marshal, feeling his frustration as he is trying to save the plane while everyone on board – and on the ground – seems to be conspiring against him.

Reunited with Neeson after Unknown, the director Jaume Collet-Serra effectively milks our – and his – confusion as he chips away at the terrorist plot.

But the threat is never quite as advertised – on the one hand, the suggestion is that if the mysterious antagonist doesn’t get his or her way, everyone on board will die, but on the other hand, the threat seems to be to kill someone every twenty minutes – of a six hour flight – putting, in theory, just 18 of nearly 150 lives at risk.

Furthermore, once the bodies start to pile up, the death rate is nothing like the terrorist seems to be threatening, with this 18 figure nothing more than a distant goal, as the terrorist apparently switches tack midway through the flight.

Despite a handful of incoherent plot points, the narrative does largely hang together, until the true antagonist is revealed – at which point nothing quite makes sense anymore, particularly when we get the typical “why I did it” baddie speech, which will leave audiences as disappointingly stunned as the passengers.

The airline – complete with its two pilots and just two stewardesses – never quite feels real – not least some of the accents – just because the airline has British in its title, it doesn’t mean those actors of different nationalities should have to try a British accent – airlines frequently hire crew from all over the place.

But the same Neeson we’ve seen in Taken, among others – the highly trained man with a pistol, up against an unknown threat – delivers a convincing enough turn, with unexpected moments of humour, coming more from parody of his previous roles than anything particular to this one.

Jaume Collet-Serra handles the claustrophobic action well enough, but the characters themselves feel too clunky as, one by one, we revisit people we were introduced to before take off, as if he’s saying “Remember this person from earlier? Well, this is how they fit into my story.”

Non-Stop is brainless fun, perhaps best enjoyed not as part of an in-flight entertainment programme. But it’s a common example of efficient direction of a silly script.