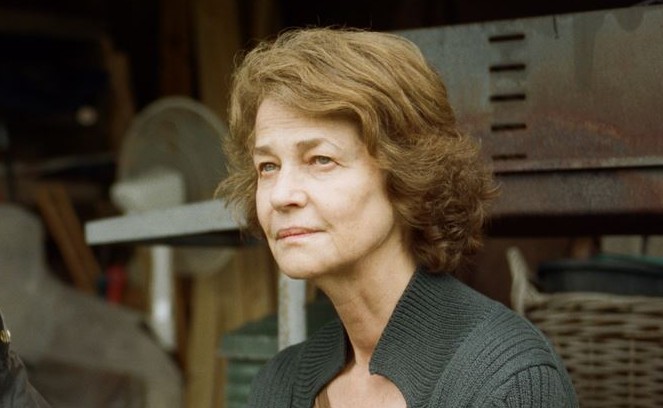 Retired school-teacher Kate (Charlotte Rampling) and former engineer Geoff (Tom Courtenay) are just days away from not just their forty-fifth wedding anniversary, but a lavish party to celebrate it.

As Kate busies herself with choosing the music playlist and finding the right dress, the preparations are thrown into turmoil by the arrival of a letter, addressed to Geoff.

Fifty years earlier, before he and Kate even met, Geoff and his then girlfriend Katya had been hiking in the Swiss Alps and she had fallen to her death through a crack in the ice, never to be seen again – until now. Her body has just been found and Geoff has been notified, as her next of kin.

Learning that her body has been discovered makes Geoff think about the past that might have been, had Katya not died, making Kate feel increasingly insecure about her marriage.

And when she starts to suspect that the ghost of Katya has been making its mark on her own relationship for all these years, she begins to wonder whether it would be right to celebrate the anniversary at all.

Reaching our screens already laden down with awards aplenty from some highly respected film festivals, there’s no question that 45 Years is a masterclass in acting – almost entirely a two hander, with two of Britain’s finest actors – in their age-group – sparring off against each other in a just handful of locations, around their house, their garden and their local Norfolk town.

The sparring nature of their exchanges is underplayed in that way that people who’ve known each other for a long time can dig deep and eke out a lot of information with very few words. It’s all looks and gestures. And they’re not happy ones. We see a composed Kate trying to be the grown-up, by trying to hide her true feelings while Geoff, who’s aging less gracefully, perhaps selfishly or perhaps instinctively, feels no need to mask his.

45 Years is an examination of how the past influences the present – whether there’s any point being jealous of your partner’s former lover, whether public displays of affection can mask or encourage true feelings.

There are many themes explored by writer/director Andrew Haigh, who’s adapting a short story by David Constantine. But while many short stories adapt better to feature films than novels, this one does at times feel somewhat stretched – there are some interesting ideas to consider, but not really enough substance to hang them on, resulting in the same interesting ideas being pontificated again and again, perhaps nudged forward only slightly from the previous occasion. For a film which is condensed into such a short period of such a long marriage, very little actually happens and less is discussed than you might expect.

The frame onto which the rest of the film is built, the performances are beautifully and naturally underplayed, almost by contrast to the stagehands, almost Dogma-like direction, with long takes from few camera angles with no incidental music; it’s quiet and mannered film-making, perhaps too quiet and mannered. But while the performances are completely functional in terms of the unfolding story, the plot kicks in as the film begins in earnest, giving us no time to get to know the characters before their life is turned upside down, meaning that we don’t really get a sense of how good this relationship is before it comes up against such challenges.

Apart from a couple of scenes, where we see the couple flirting or dancing, we don’t really get a sense that they usually have – or have ever much – much fun together. To judge how the revelation has affected their relationship, it might help to know whether they were particularly overtly amorous or playful as a couple. We seem to hear a lot more about Geoff’s all-too-brief relationship with Katya than we learn about his marriage to Kate. But while this presses home the power the past has over the present, it’s not surprising that such a revelation would play on their minds and put pressure on their relationship, particularly approaching such an important milestone, who’s to say that a week or two after he’d heard the news, he wouldn’t have got over the shock, reminisced a little and moved on.

A snapshot of any relationship doesn’t necessarily tell us anything about them as individuals or as a couple, any more than an argument you might have with your own partner would suggest that your own relationship is doomed, or indeed haunted by the past. Perhaps yours is. Perhaps theirs is. But is a few days, isolated from the more recent past, long enough to make that judgement?

This film has received many five star reviews. Each critic is clearly entitled to their own opinion, but I might question to what extent many of their insightful comments are being inferred by their own intelligence and experience, rather than being implied by the film. But perhaps to be great, all a film has to do is make you think?

For me, clever cinema requires a little more from the film-makers – while it’s fair to say that it’s satisfying for the director to leave you to do some of the work, it’s also satisfying for the director to do some of the work themselves, rather than just wind up his actors and say “go”. And I don’t need to see a film to encourage me to sit down and contemplate ghosts of the past or the conflict between contentment on the surface with the insecurities thriving below.