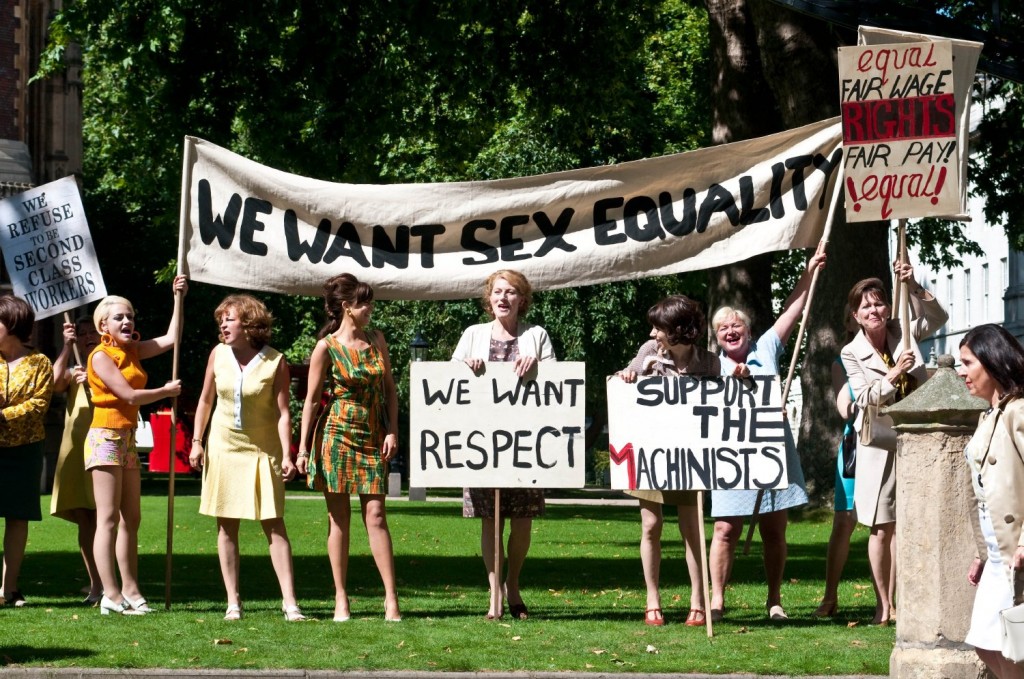 Back in 1968, Ford tried to save a bit of money by reclassifying 187 seamstresses, working in a stuffy, leaking factory, as “unskilled” so it could pay them the same rate as the cleaners, rather than the men who were building the cars.

With a bit of encouragement from union shop-steward Albert (Bob Hoskins), the women turn their quiet frustration into a vocal strike and out of nowhere, the unassuming young mother Rita (Sally Hawkins) finds herself leading the women on a strike that would pave the way for equal pay legislation.

But the path to justice is never easy – with opposition from Ford bosses (Rupert Graves and Richard Schiff), the husbands whose own work dries up when there are no more seats to put in the cars and even the union leader (Kenneth Cranham), who wants to protect his own privileged position.

But a little encouragement from the boss’s wife (Rosamund Pike), the interest of Employment Secretary Barbara Castle (Miranda Richardson) and growing respect and understanding from her own husband (Daniel Mays) nudge Rita along the difficult path that turns an everyday seamstress to a history-maker.

On one level – the typical Brit-flick level – this is a charming, if twee, dramedy – taking a sweet and slightly eccentric look at a seminal period of British history. Director Nigel Cole’s own Calendar Girls will give you a flavour – and there’s a sense in which this is a female Full Monty, although without the – well – full monty.

That said, you might find yourself cracking under the weight of clichés, from the immovably old-fashioned bosses and the self-interested union leaders to the husband whose initial enthusiasm transforms first into frustration and then back to admiration. There’s even a completely incongruous moment of tragedy that fails to rally further support for the cause, assuming that’s why it’s there.

A key problem with this is that the plot itself seems too clunky, convenient and obvious to feel truly dramatic and genuinely emotional. This might seem odd, given that it is based on real events. But that’s just it – it’s based on real events, but it’s not actually real events. If Sally Hawkins’s Rita O’Grady doesn’t seem real, that’s because she never actually existed – she’s an amalgam of several of the leading women among the strikers. At the end of the film, we actually hear from some of the real-life strikers and wonder whether it might have been more convincing to follow their stories.

It’s one of those rare “real life” stories where the “if it happened in a movie, you wouldn’t believe it” joke actually stands up.
The interesting corollary to that, of course, is that despite the film ending with everyone patting themselves on the back at the passing of the Equal Pay Act, many women are still paid less than their male counterparts.