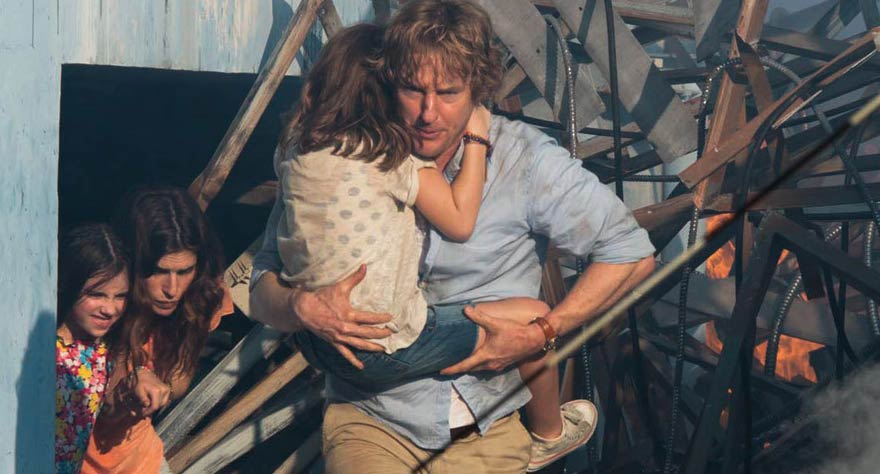 Jack (Owen Wilson) is posted to an unnamed south-east Asian country when his employer – an American water company – secures a lucrative contract to clean up supplies there.

Arriving at the airport with his wife (Lake Bell) and kids (Claire Geare and Sterling Jerins), he meets an overly friendly fellow American, Hammond (Pierce Brosnan), who sets them up with a cab ride to their hotel.

As they’re settling in, Jack pops out to buy a newspaper but gets caught up in unrest that’s bubbling in the streets.

He makes it back to the hotel, where he finds that armed protesters have the building under siege – and he realises that it’s the Americans that they’re after.

Jack manages to sneaks into the building to rescue his wife and kids. But when it comes to working out how to get them to safety across the border, it seems like there’s … no escape.

Not since Behind Enemy Lines in 2002 have we seen Owen Wilson in such a humourless role, as he attempts to flex his action muscles once more.

As an everyman American, trying to free his family from a besieged hotel, the star of such comic films as Shanghai Noon, Zoolander, The Internship and Midnight in Paris, is trying to be more like Bruce Willis in Die Hard – although, oddly, without the humour. Here, it’s the former James Bond Pierce Brosnan who provides the light comic relief – or at least tries to.

At its heart, No Escape is a nail-biting cat-and-mouse drama,  with an innocent American and his family trying to escape an escalating revolution – and there’s a interesting political dimension to the story, when it emerges that perhaps the American input into the back-story might not be quite as innocent as it initially appears.

Jack, his wife and their girls witness some of the most raw violence of any recent big-screen adventure and find themselves involved in a handful of barely believable escapades, but despite – or perhaps because of – the absurdity of much of the plot, it remains extremely tense.

You might wonder what happens to the rest of the westerners. You might not be convinced by the assistance that comes their way. You might refuse to accept the way they make it off the hotel roof. But if you suspend your disbelief and hold your breath, there is entertainment to be had here.

And don’t let yourself get too annoyed by the film’s title, which is clearly false, as no-one would go to see a family drama in which there really was no escape. The film’s original title – The Coup – might have been more appropriate for pedants like me, although the unrest turns out to be less of a coup than a protest against foreign influence, on which point, some of the internal politics, while a useful wallpaper for the film, has less of an impact on the foreground than it should.