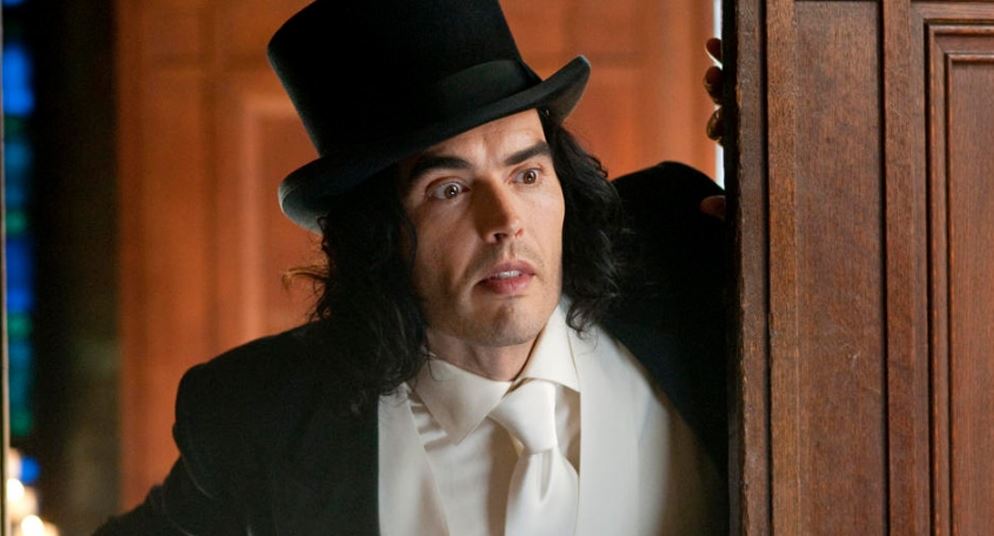 Arthur Bach (Russell Brand) is the only heir to the Manhattan-based multi-national Bach Worldwide corporation, but his mother Vivienne (Geraldine James) is growing worried.

He’s a shamelessly irresponsible alcoholic playboy whose life consists of sleeping with whatever women he can get his hands on and building up his collection of movie cars.

When we first meet him, he’s about to embarrass her by heading to a fund-raiser in his Batmobile, in full costume, with his overweight chauffer Bitterman (Luis Guzman) bursting out of his Robin costume and the paparazzi in tow.

Vivienne knows she can’t leave the firm in Arthur’s hands, so she comes up with a succession plan; Arthur is to marry her assistant Susan (Jennifer Garner), the wealthy daughter of a hard-as-nails self-made property billionaire (Nick Nolte), who will then at least have the right surname to run Bach Worldwide.

Failure to go along with this plan will result in Arthur being cut off, but having done nothing for his entire adult life but drink and philander, this isn’t something he could cope with. Half-heartedly, he goes along with the idea until he encounters the ditsy unlicensed tour-guide Naomi (Greta Gerwig), who lives with her father in the suburbs, in one of those houses that poor movie characters live in, beside railway lines.

Under the watchful eye of his life-long nanny Hobson (Helen Mirren), Arthur does his best to win the woman of his dreams, fight for the family fortune – and generally grow up a bit.

After seeing Russell Brand essentially playing himself – or at least a character reminiscent of the persona the press portrays – in Forgetting Sarah Marshall and Get Him To The Greek, this is a chance to see him have a go at acting.

He prances around like he owns the screen, but never does anything worth looking at. He’s like a child screaming “look at me” but with nothing to show you when he wins your attention.

If this had been his first foray into Hollywood, it would probably have been his last.

There are some amusing sight gags, such as the unexpected appearance of cars from different films, but considering the script is from Peter Baynham (an Oscar nominee for Borat), the story, characterisation and even one-liners are disappointingly flat.

It makes a change to see Dame Helen Mirren having another go at comedy. She doesn’t pull it off, but then again, she’s really not given much to work with.

This is certainly one of those films which makes you wonder why Steve Gordon’s original needed updating. It’s different enough (Helen Mirren is in the role previously played by Sir John Gielgud) for people familiar with the original to be intrigued to see what’s changed, but what has changed is weak enough that anyone who liked the original is likely to be offended by the notion of staining its memory with this forgettable, charmless, immature mess of missed opportunities.