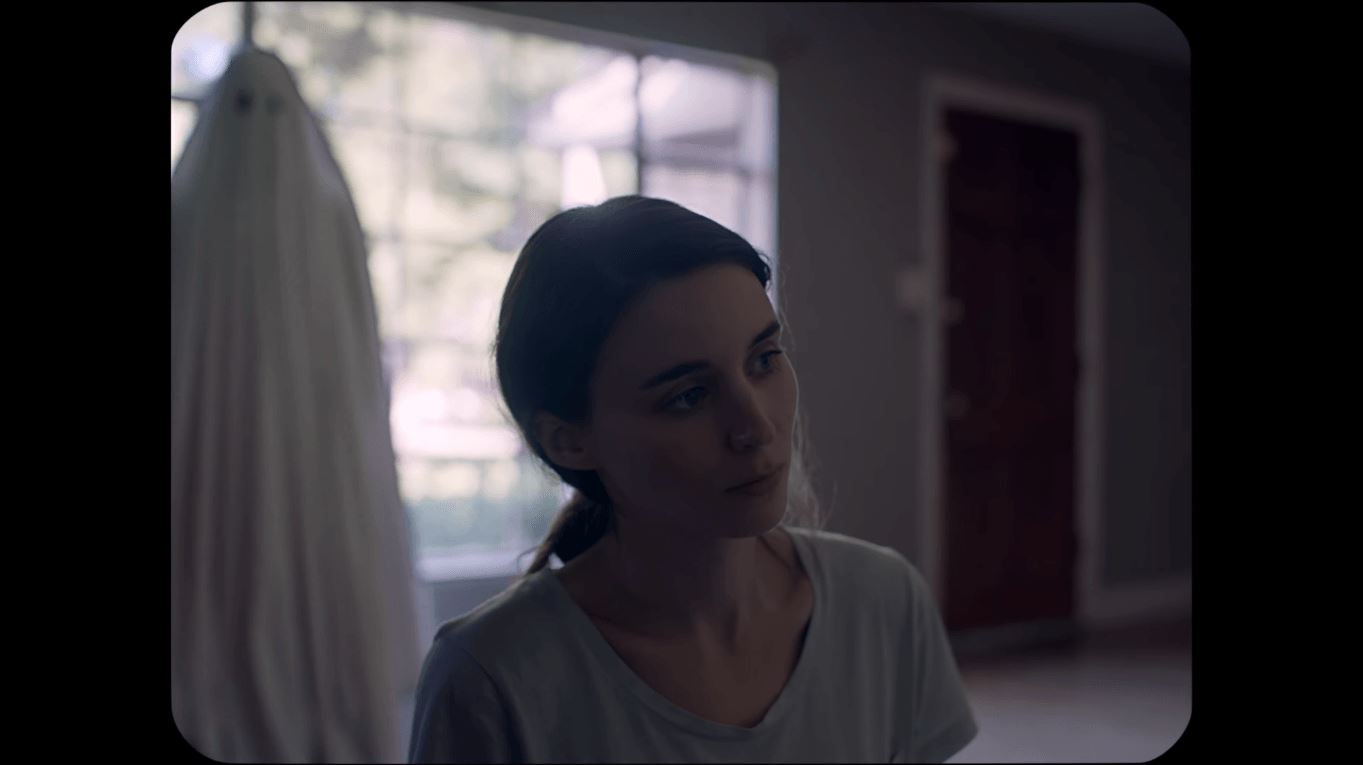 An unnamed couple (Casey Affleck and Rooney Mara) live in a modest bungalow in a small Texas town. She wants to move house. He doesn’t. Such is the everyday nature of their relationship…

…until he’s killed in a road accident at the end of their drive. She goes to the hospital to identify the body. As she heads home, the mortuary attendant neatly places the sheet back over his face.

Alone in the room, he sits up. Under the sheet.

Mournfully, the ghostly figure of a sheet – with blacked-out eyes – walks back to the house, where he keeps a watchful eye over his former lover as she grieves and slowly moves on with her life.

He, on the other hand, is stuck, trapped at the house as new residents arrive and leave. Time no longer has any meaning for him, as he watches, waits and searches for the release that will finally set him free to move on in his own way.

And don’t worry if the film is about to start and the curtains aren’t fully opened – David Lowery has chosen not only to shoot in the old TV-shaped 4:3 aspect ratio favoured by relatively few working directors but he’s rounded off the corners to make the image resemble frames from early silent films.

And this film is largely silent; for most of the time, background characters might be talking or pontificating as they go about their everyday life, but Affleck’s ghost is mute – there’s no hole cut in the sheet for a mouth, of course. The grieving Rooney Mara is also consequently necessarily silent, with no-one left at home to talk to, portraying her loss through a scene that will go down in cinema history as the most powerful display of emotions using a pie.

But there’s not even much need for dialogue in a film that’s more about contemplating mortality than discussing it. Rooney Mara’s character is largely redundant in a film that’s told from the point of view of a fresh ghost who hasn’t worked out how – or even whether – he can interact with his former world.

A whole segment of the film features a Spanish family, without providing any subtitles to help those who never learned that “cuarto” means bedroom. But even if you can’t understand every word, the film is not so much about them as it is about the silent spectre watching them and wondering how doing so can help him.

Then there’s the editing – or almost lack of it, as the camera is often left, locked in a wide shot, for seemingly minutes on end – sometimes with characters moving around in the static frame but often with the characters themselves as static as the frame around them.

While A Ghost Story looks and sounds like no other film, it explores themes that are no strangers to modern cinema – chiefly love, loss, longing and life. But exploring these themes convincingly with almost no dialogue is no mean feat. It’s not unheard of to minimise dialogue – the upcoming Brimstone features a mute protagonist, but she can communicate with sign language and you can read her emotions on her face and in her eyes – however, Affleck’s ghost has cold, dark pits for eyes and no other features to give any clues at all to his emotions. Yet he manages to find other tools – the snail-like pace at which he shuffles across a room, the deliberate way in which he turns his head or slowly lifts an arm, the mournful, soulless stare at the woman he loved, the life he lived and the world he misses.

The sheet’s performance is, oddly, more convincing and powerful than the underplayed living musician we see largely in flashback. The woman isn’t the only one who’s grieving. From the moment his character dies and is replaced by a sheet, we learn more than you could possibly imagine about this entity, its acceptance of its existence and its determination to learn about its surroundings and find his release.

One particular scene brings the film almost unnecessarily to life, as a group of hippies hold a party in what they understand is a haunted house, giving one in particular (Will Oldham) the opportunity to prognosticate about the pointlessness of creativity and the fruitlessness of permanence in a universe that’s destined for an inevitable implosion. In one monologue, he says more than the rest of the film’s dialogue combined.

This isn’t the kind of ghost-film where these hippies are then knocked off one-by-one by the spectre. Lowery simply makes this point and then moves on to the next one. Of course, ghost stories don’t have to be fast-cutting, whiz-bang scream-fests – they can equally be slow, sombre and genuinely haunting affairs. But in addition to getting more emotion out of a sheet than many other directors can get from their actors’ faces, perhaps the director’s greatest achievement is to use the simplistic imagery of a ghostly sheet in the first place, without even tempting audiences to laugh at what in any other arena would be laughable. He also manages to squeeze moments of the driest of humour and the gentlest of sentimentality from the most unexpected of places.

There’s not much new here thematically, narratively or even structurally, as it employs flashbacks and plays with chronology in a way that so many others do – and this creates its own issues that will make you question whether some vital elements of the plot actually work at all.

But employing not just one or two cinematic tricks but an entire armoury to produce one of the most poetic, thought provoking and refreshingly different pieces of cinema of recent years, makes it feel oddly satisfying, if – at times – interminably slow. But the pacing, as deliberate as the movement of the ghost, only heightens the power of the rare moments of catharsis in the film.

Lowery is rebelling against our expectations of both the genre and the medium itself.

To get the most out of this, you’ll need to be open-minded and above all, just don’t expect a traditional ghost story – or indeed a traditional piece of cinema. This is about as experimental as a film can be while retaining a largely coherent narrative, but it will unquestionably leave some viewers wondering whether David Lowery is being bold, brave and insightful or arch, manipulative and pretentious.

In truth, its probably a combination of them all.