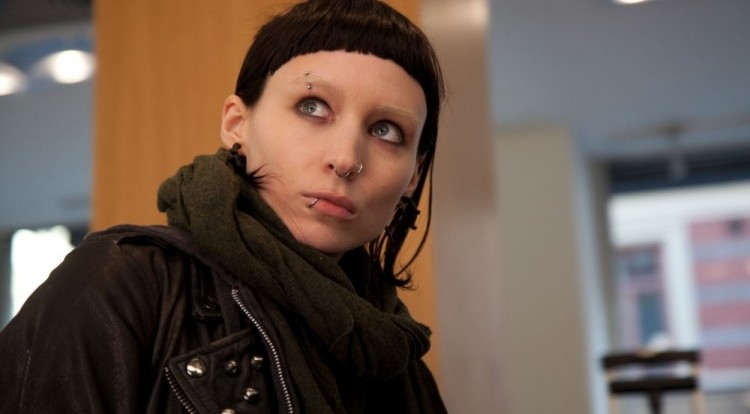 He quits as publisher of the current affairs magazine Millennium, to save it – and his fellow publisher, and lover Erika (Robin Wright) embarrassment.

Mikael has plenty of time on his hands, while he considers how to regain his reputation.

After getting a young cyber-punk computer-hacker Lisbeth Salander (Rooney Mara) to check him out, wealthy industrialist, Henrik Vanger (Christopher Plummer), hires Mikael to investigate the disappearance – and presumed death – of his niece, from the family’s private island, forty years earlier.

Mikael accepts the challenge, but soon becomes overwhelmed by the sheer weight of information about four decades of hatred, mistrust and enmity that have infused the expansive family tree. He asks Henrik for an assistant; it’s suggested that he uses Lisbeth.

With a past every bit as disturbed and abusive as that of the missing woman, Lisbeth agrees to join Mikael in the search for a misogynistic killer and they leave no stone unturned to uncover Vanger family secrets that some of them just can’t allow to come out.

The closer the pair come to finding out who has been kidnapping and killing young women across the country for decades – and why – the closer the noose tightens around their own necks.

Can they unravel the mystery before it’s too late?

But it cannot be ignored that many people will recognise the plot – it is, of course, a remake of the recent Swedish hit of the same name, itself an adaptation of the Stieg Larsson’s posthumous international best seller.

Bringing such a project to the screen will always have its pitfalls – the first hurdle to overcome must surely be why. Just for one moment, let’s forget the obvious answer – that English-language audiences don’t like films with subtitles. Let’s consider the possibility that anyone can watch any film and many will already have seen the Swedish version of this film.

So why make an English language version? As it happens, the recent Swedish vampire film Let The Right One In adapted very well to the United States in Let Me In and one of the strongest films at the London Film Festival, the Norwegian crime-novel adaptation Headhunters, is already being Americanised – so this has been done before and will be done again.

One of the first questions about The Girl With the Dragon Tattoo was how an American adaptation would reflect one of the key political undercurrents of the source material – Sweden’s guilt about its Nazi sympathies during the Second World War. This is handled in the simplest way possible – leaving the film set in Sweden – but that then gives rise to a bunch of characters speaking English with Swedish accents.

Daniel Craig – oddly – sticks to his own idiolect, but Robin Wright, Rooney Mara and Christopher Plummer – among others – deliver their dialogue with a Scandinavian twang – only one actor comes out of this unscathed – Stellan Skarsgård, a Swede.

If you’re going to set a film in Sweden, use some Swedish actors and have others pretending to be Swedish, it begs the question, why do it in English at all – and at the very least, why not use Noomi Rapace – the Swedish actress who brought Lisbeth Salander to life in the original film and whose recent performance in Sherlock Holmes shows that she could have spoken English just as well as Rooney Mara.

Not that there’s anything wrong with Rooney Mara’s performance – it’s just not clear why it was needed in the first place.

One potential benefit of a remake is the opportunity provided to resolve problems that might have existed with the original – and in this case, there were many. If Lisbeth is such a good investigator, why didn’t Henrik Vanger just hire her in the first place? If she had such a brutal past as a victim of sexual abuse, how comes she so freely jumps into bed with Mikael? Why does the bad guy have to sit and explain what he did and why, just long enough for someone to arrive to save his final victim? The answer could be “because that’s what happened in the book” or “because that’s what happened in the first film” but if you’re going to the effort to spend millions of dollars and using some of the best creative talent working anywhere in the world, why not use the opportunity to improve on the source material rather than just copy everything, down to the incoherent frustrations.

There are a couple of other problems which suggest a lack of direction from the outset – the opening credit sequence would have felt more suitable for a Bond film (Daniel Craig, anyone?) and even before that, however you sum up the plot (disgraced journalist gets hired to investigate disappearance of businessman’s niece), it doesn’t fit with the title. The Girl with the Dragon Tattoo? It should be called The Man who gets Help from the Girl with the Dragon Tattoo.

So most of the film’s failings are a direct result of being too faithful to the source material. All that aside, the key performances work well, the cinematography evokes the required isolation, the music neatly balances the action. One of the few lighter moments – and even then, an in-joke – comes from the music; Fincher returns to the pair who delivered his Oscar-winning score for The Social Network, Trent Reznor, from Nine Inch Nails, and and Atticus Ross – when Lisbeth turns up to get some equipment from one of her computer-nerd colleagues, he opens the door wearing a Nine Inch Nails T-shirt.

Perhaps one of the most interesting asides with this film – a film about misogynistic killers, rapists, Nazi sympathisers and corrupt businessmen – is its reliance on computer hacking at a time that it’s under the spotlight in the UK as part of both a Metropolitan Police inquiry and the Leveson Inquiry into the practices of the press. The film acknowledges – and even makes a big deal out of the fact that computer hacking is illegal, yet the film demands that we support our heroes’ continued use of the practice to get what they need.

Hacking is illegal. But it’s useful. Arguably, even essential. Certainly for this plot to unfold. If we support our main characters using such techniques, should we express such disgust when those at the receiving end of hacking give evidence to judicial inquiries in the real world.

With one key scene taking place in London, the Metropolitan Police who see to it that our protagonists end up in jail for a few months for that they get up to. Clearly it’s not something that Stieg Larsson or David Fincher would have had on their minds, but it’s an interesting time for this film to be released.