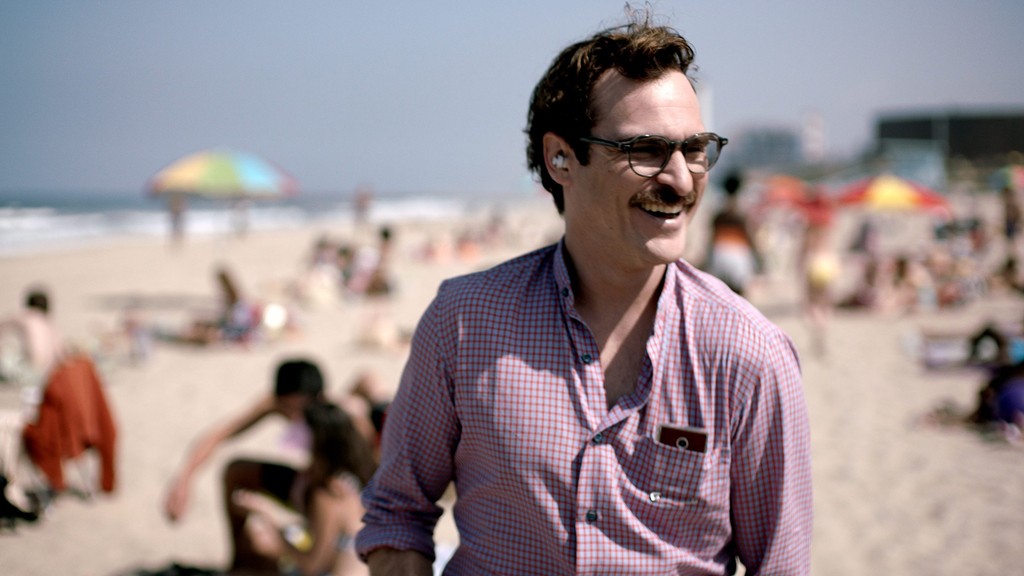 In the not too distant future, Theodore (Joaquin Phoenix) has been feeling rather sorry for himself since his childhood sweetheart and wife Catherine (Rooney Mara) left him. He been doing all he can to avoid signing the divorce papers.

His job involves composing tailored greetings cards for people who don’t have the imagination to write their own, but these vicarious emotions are as close as he gets to the real thing these days.

After a tip-off from a friend, he buys a new operating system for his phone and computer – an artificially intelligent system that can both talk to him and learn from their conversations.

With a sultry female voice (Scarlett Johansson), his operating system calls herself Samantha, and before long, Theodore finds himself sitting up late at night, talking to her – he surprises himself by feeling that they have become genuine companions. Her friendship gives him the confidence to go on a blind date with a woman (Olivia Wilde) who his best friend Amy (Amy Adams) has been trying to set him up with.

But the date doesn’t go well and discussing this with Samantha, as he does, takes their relationship in a whole new direction. Before long, the pair’s flirting has developed into a relationship that feels as real to him as any he’s ever had with a real woman. He even freely talks to others about Samantha as his girlfriend.

Their relationship comes under strain when jealousy sets in as Samantha reveals that Theodore is not the only human she speaks to – and worse, not the only human she loves. And it’s not just other humans getting in the way of their relationship; soon, Samantha’s interaction with other similarly advanced operating systems makes them all realise that humans aren’t advanced enough to help them develop themselves.

Spike Jonze is best known for directing Being John Malkovich and Adaptation, two films written by Charlie Kaufman. This is, in fact, the first feature he has written and it’s certainly in the mould of Kaufman’s offbeat slightly surreal comedies with melancholic undertones.

While some of the technology used in Jonze’s world is not too dissimilar from that seen in Minority Report and Blade Runner, Her is set in a world that’s altogether brighter, more colourful and certainly less violent. Setting it closer to the present day, Jonze says he uses the technology as nothing more than the background for a romance, but in truth, it’s an intrinsic part of a story that would be nothing without it.

The film cleverly takes our world which already sees people walking down the street texting, facebooking or snapchatting their friends – virtual or otherwise – and pushes it to another level, where it’s virtual characters who are at the other end of the conversations. Her without the technology would be about as interesting to most people as real life without technology.

Her examines our dependence on technology and considers whether, in reality, the most important relationships should be with real people in person. It’s not quite clear whether it has a message – or indeed if it does, what it might be; should we learn to relate to people rather than computers? Should we learn to let go? Whatever it seems to be saying isn’t anything like as original as the vehicle used to say it.

While the film explores some interesting areas and is beautifully shot, it’s not as emotional as it needs to be and you never really believe that he’s in love with his computer – and if he does, you don’t support him in this endeavour – it actually makes him come across as somewhat pathetic – he can’t find a real woman, so he has to settle for a virtual girlfriend.

As such, the narrative that unfolds through the intricately intellectual script feels a little flat, falling short of the standard of the performances and the tremendously imaginative premise. Spike Jonze has a great idea, takes it to interesting places but – perhaps without the authoritative depth provided by Kaufman’s guiding hand – doesn’t quite know where its destination should be. One element that reflects Jonze’s earlier success is casting the glamorous Amy Adams as a bit of a frump, much as he did with Cameron Diaz in Being John Malkovich.

It’s narratively original and thematically brave but emotional unengaging, making it work better as a satire on technology than a romance.

Interestingly, as with August: Osage County before it, Her featured in the comedy category at the Golden Globes, but as a somewhat depressing film with desperately dark overtones, it feels equally out of place. While at times it feels unexpectedly uplifting, coming from the mind of Spike Jonze and giving all the men unnaturally high waist-lines doesn’t make a film a comedy.