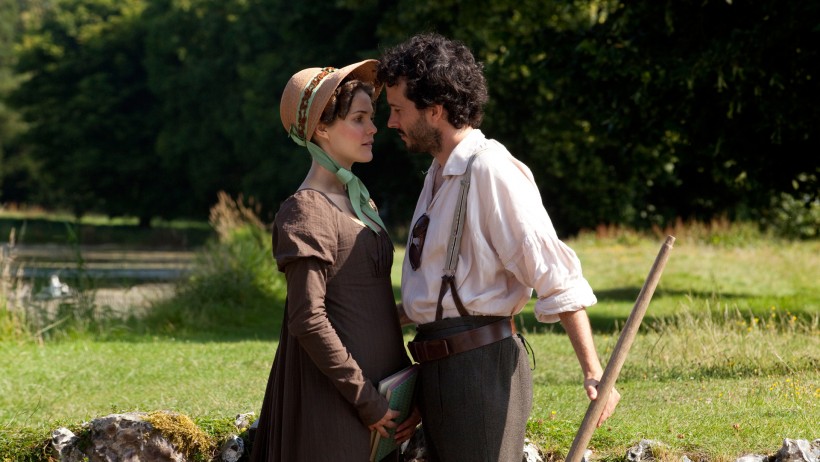 Unlucky in love, a Jane-Austen-obsessed thirty-something, the suitably-named Jane (Keri Russell), spends her life savings to travel from small-town America to the English countryside, for a holiday at a quaint Austen-inspired theme-park, Austenland.

She arrives to find that the two other guests – yes, this holiday-resort has room for only three guests at a time – have paid more than her, so they get to wear nicer regency-style outfits and, crucially, have suitors of a higher status; the resort owner (Jane Seymour) hires actors to woo her guests, Austen-style.

The exhuberant Miss Elizabeth Charming (Jennifer Coolidge) and the prim and proper Lady Amelia Heartwright (Georgia King) enjoy the advances of war hero Captain George East (Ricky Whittle) and Colonel Andrews (James Callis), who would be more at home in a resort for fans of Gilbert and Sullivan.

The longer Jane spends immersed in what she’d hoped would be her dream, the more she realises that real happiness is not found in the pages of a romantic novel.

With help from the director Jerusha Hess, author Shannon Hale has adapted this screenplay from her own novel, which draws on the hopes, dreams and obsessions of young women who’ve grown up with the image of Colin Firth emerging from the lake in the BBC’s Pride and Prejudice adaptation.

But the film that’s come out of this process is the most broad-brushed, stereotyped and embarrassingly clunky effort of the year.

Every step of the way, you can feel that the film-makers are proud of themselves, coming up with one gag after another, but without fail, they all fall flat.

From the moment Jane – a supposedly bright and intelligent person – turns up at the airport in an approximation of a regency outfit, the scene is set for low-brow, childish humour that doesn’t even attempt to explore any adult themes at all.

Making an Austen fan the heroine of her own Austen-style story, with social differences influencing her struggle to choose between the right man and the wrong man, as they vie for her affections, could have been a clever twist on an old theme; modernising classics has been done with the likes of Shakespeare, for example, but centring the story on an enthusiast of the genre would have been rather innovative.

But the plot is so forced, clumsy and childish – and alternately predictable or incoherent – that it had no narrative flow and failed even to raise a genuine smile.

It was highly embarassing to watch, so goodness knows how embarrassing it must have been for the actors. I’m sure it was fun for them, but it takes more than putting on silly costumes and voices to make an effective romantic comedy.

It’s clear what they were trying to do – and it could have worked – but the inconsistent mood, trying to blend vaudeville farce and rom-com, has resulted in a cinematic mess and the biggest missed opportunity of the year.