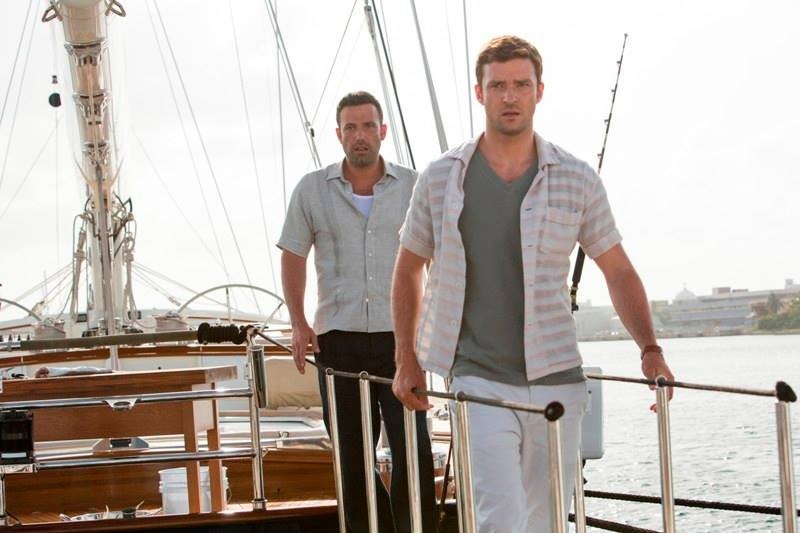 After the financial crisis pushed him out of his high-paying Wall Street job, Richie (Justin Timberlake) returned to Princeton – paying for his education with kickbacks he got from hooking fellow students up with internet gambling sites. When times got particularly tough, he played a little himself – always secure in knowledge that knowing how they work, he’ll walk away with the winnings.

But, on the verge of being kicked out of college, he risks it all on one game – and loses. Convinced the website must have been cheating, Richie sets off to Costa Rica to confront its ruthless boss, Ivan Block (Ben Affleck).

Block is so impressed with Richie’s knowledge and attitude that he invites him to join his team and the lure of the yachts and fast cars is enough to persuade him to give up the idea of returning to Princeton.

But soon, the promise of riches starts to fade, as he falls for Block’s girlfriend Rebecca (Gemma Arterton), Block starts sending him to pay off corrupt politicians and the FBI try to get him to inform on Block.

Richie has to decide whether to stay loyal to paymaster, help the authorities bring him down or find his own way out of the mess.

After directing and starring in the Oscar-winning Argo, this is somewhat of a comedown for Ben Affleck – the kind of performance that had once tarred his career before Argo showed he could be a player worth respect.

If it was a gamble to take on this role, while still basking in the glow of the awards thrust at him earlier in the year, it hasn’t paid off. He’s sleepwalking through the role as a ruthless online casino kingpin – the character is as unconvincing as his performance. Crucially, he’s neither frightening nor chilling.

Justin Timberlake is more believable as his sidekick, although the story itself feels terribly standard, with just the right number of obvious plot points and twists to lead audiences through a very familiar cinema-going experience.

Even when some of these formulaic traits have the potential to open up the film into more dramatic territory, it shirks from being brave and plays it safe; of all the party-girls in Costa Rica’s casino community, Richie falls for his boss’s girlfriend – but this doesn’t even seem to be a point of tension.

It’s enjoyable enough to watch our young hero fight for survival with gangsters, corrupt criminals and ruthless law enforcement officers coming at him from different sides, but a film, which is clearly trying to be fresh, has nothing new to offer a world which is now almost as old as – and certainly less interesting than – the establishments brought to the big screen in films such as Casino and Bugsy.